For 270 million years, trilobites were among the dominant species on Earth. Around the world, they left tracks known as Cruziana as they passed. One type of print, known as Cruziana rugosa, has long puzzled paleontologists, since the maker of these strange paths could not be identified. Now, however, the mystery may have been solved, with the discovery of a type of trilobite well suited to making the parallel lines seen in the C. rugosa.

Dr Diego Garcia-Bellido of the University of Adelaide has helped describe the new species of trilobite, Megistaspis (Ekeraspis) hammondi, in Scientific Reports. Three specimens were found in Moroccan rocks dated to 478 million years ago.

Like other trilobites, M. hammondi was flat with a broad head, tapered body, and a lot of legs. Unusually, however, the three pairs of front legs each had short, stubby spines known as setae. Garcia-Bellido sees the explanation to the C. rugosa in these setae.

“Cruziana are very common,” Garcia-Bellido told IFLScience. “But the Cruziana rugosa were not. They were only found for a short period of time around the margins of Gondwanaland.” The timing matches very well with the age of the fossils Garcia-Bellido described.

Besides resolving the C. rugosa mystery, the discovery of M. hammondi is significant for the unusual preservation of the soft body parts. The overwhelming majority of known trilobite fossils only show the hard exoskeleton, with the skin and internal organs lost to scavenging or decay.

The digestive system of M. hammondi suggests it ate by scavenging for decaying bodies and through sediment feeding, swallowing the mud at the bottom of the sea and extracting the nutrients using powerful enzymes in its stomach, Garcia-Bellido added. The job of the front legs was to shovel the sediment into the creature's mouth. In the process, they left 12 parallel grooves in the mud, which in some cases became preserved to be found by us almost 500 million years later.

Most trilobite appendages were too soft to survive such treatment, Garcia-Bellido told IFLScience, but the spines were short and thick enough to plow the mud unharmed.

M. hammondi was also distinctive in combining digestive features that have been seen in different trilobites, but never together. Specifically, a “crop” in which food is stored near the mouth has previously been seen as an alternative to multiple digestive glands known as caeca, but M. hammondi had both. The evolutionary reason for this remains unknown. 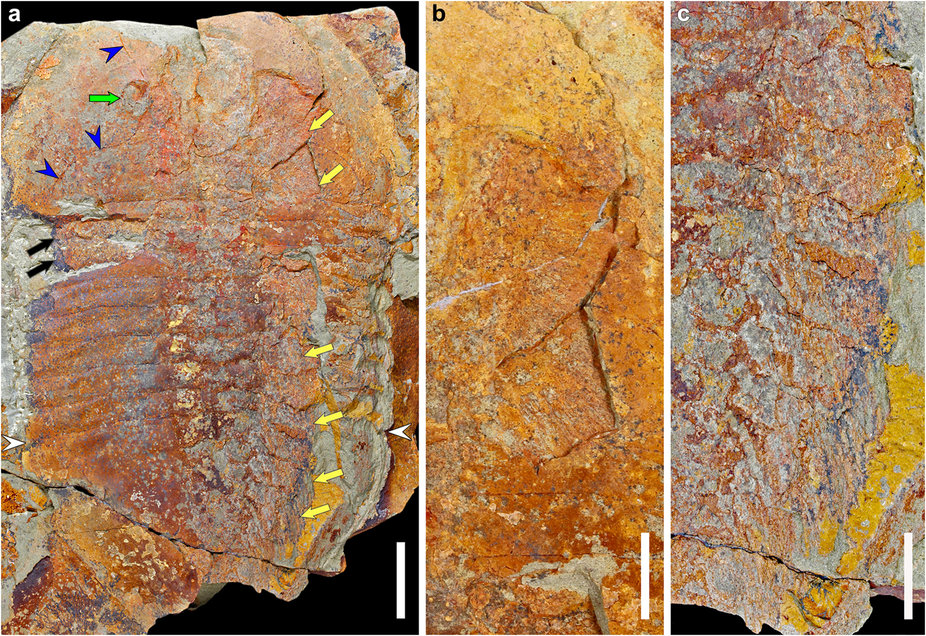 (a) Overall view of one of the specimens. Yellow arrows point to setae thought to have carved the Cruziana rugosa; black arrows indicate thoracic endopods; green arrow points to left eye; blue arrowheads indicate the facial suture; (b) and (c) Detail of the setae. Scale bar, 20?mm for (a); 10?mm for (b,c). Gutierrez-Marco et al/Scientific Reports