As the climate hots up, so too does the pressure on us to do something about it. According to the latest Intergovernmental Panel on Climate Change (IPCC) report, we have just 32 months – less than three years – to get our act together. Before 2025, greenhouse gas emissions must peak. By 2030, carbon emissions must be cut by 43 percent, and methane emissions by about a third.

There are, of course, myriad ways to tackle the crisis. Among them are changes to agriculture, food systems, and individual diets, including veganism.

Veganism is a divisive topic. Taunted by many, it is lauded as a climate savior by many others. People who adopt the lifestyle have a lower carbon footprint, and the more who follow suit, the less we rely on animal agriculture – an industry renowned for its negative environmental impact. If a large enough proportion of the population were to go vegan, it may well have a positive impact on the planet, but can it *solve* climate change?

Veganism is a way of living that excludes all animal products, including abstaining from eating meat, dairy, and eggs.

While data on the number of vegans worldwide is hard to come by, some reports say there are 79 million vegans in the world. In the US, as of 2019, there were reportedly 9.7 million vegan Americans, which represents a 30-fold rise in just 15 years.

As the number of vegans continues to rise, what does this mean for the environment? To fully answer this, we must first consider the impact agriculture itself has on the planet.

According to the latest IPCC report, agriculture and other land use is the third leading cause of greenhouse gas emissions, behind energy and industry. 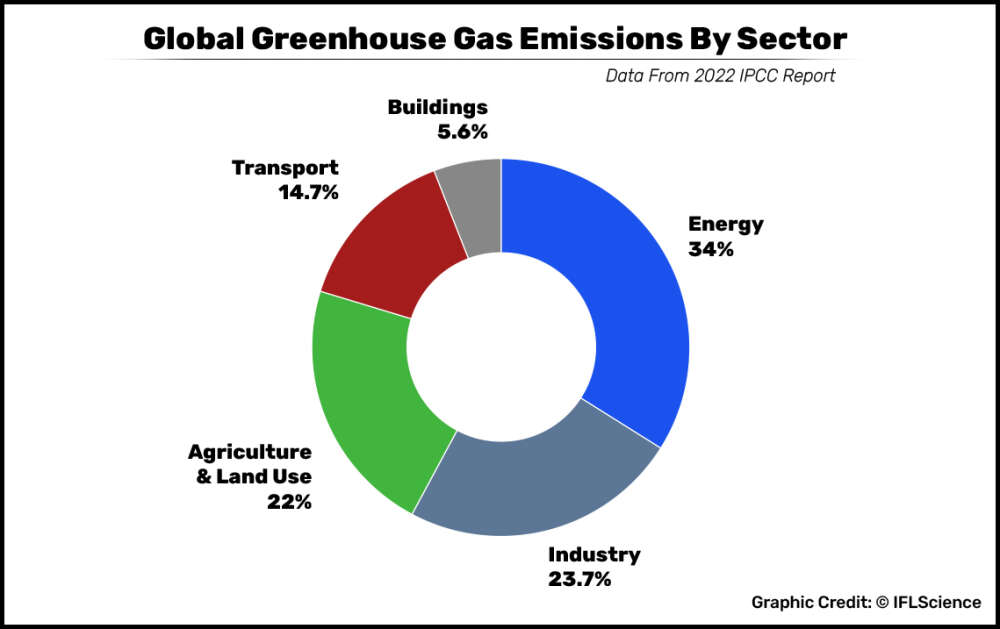 Breaking this down, land use, including agriculture, was responsible for 13 percent of carbon dioxide, 44 percent of methane, and 82 percent of nitrous oxide emissions between 2007 and 2016.

And animal agriculture in particular makes up a big chunk of this. The Food and Agriculture Organization (FAO) estimates that livestock is responsible for 14.5 percent of all greenhouse gas emissions – around 7.1 billion tons of carbon dioxide a year. While another study found that meat accounted for nearly 60 percent of global greenhouse gas emissions from food production.

The industry is an especially prolific producer of methane – which has up to 36 times the global warming potential (GWP) of carbon dioxide – and nitrous oxide – which has almost 300 times the GWP.

As well as contributing to greenhouse gas emissions, animal agriculture is often accompanied by large-scale deforestation, requires lots of water, fertilizers, and land usage, and produces lots of waste, all of which contribute to its negative environmental impact.

how Is veganism good for the environment?

There are lots of studies out there intended to determine the impact that veganism has on the environment, and the results are often conflicting. But one thing we know for certain is that plant-based foods make less of an environmental impact than animal-based foods.

“Vegan diets have half the climate footprint of average diets.”

Veganism is “one of the most powerful ways of reducing ones personal carbon footprint,” Dr Marco Springmann, Senior Researcher on Environmental Sustainability and Public Health, Nuffield Department of Population Health, University of Oxford, told IFLScience.

One recent study suggested that if everyone in the world were to go vegan, and animal agriculture practices were to cease, greenhouse gases would be stabilized for 30 years and 68 percent of carbon dioxide emissions would be offset for the rest of the century.

There have been plenty of other studies claiming similar findings – a global transition to a vegan diet could cut food-related emissions by 70 percent, estimates another.

By 2050, it could supposedly free up millions of square kilometers of land and slash carbon dioxide emissions by 8 billion tons a year. Meanwhile, eating meat or seafood just once a month could reduce emissions by almost 6 billion tons a year, and a “flexitarian” diet – replacing three-quarters of meat and dairy consumption with plant-based alternatives – could save just over 5 billion tons.

According to Smith, global veganism “would cut 14 percent global [greenhouse gas] emissions – and free up land for sequestering carbon – so probably more.”

Of course, it is neither feasible nor likely that the entire world’s population will turn to tofu tomorrow. But, the IPCC says, every little helps when it comes to making more sustainable dietary choices.

“Where appropriate, a shift to diets with a higher share of plant protein, moderate intake of animal-source foods and reduced intake of saturated fats could lead to substantial decreases in GHG emissions,” the latest report reads.

“Benefits would also include reduced land occupation and nutrient losses to the surrounding environment, while at the same time providing health benefits and reducing mortality from diet-related non-communicable diseases.”

Is veganism the solution to climate change?

Can veganism put a stop to climate change? Can any one thing tackle this imminent disaster single-handedly? It seems not. A complex problem requires a complex solution, and a single-pronged approach won’t cut it. But that’s not to say that veganism can’t form an important part of this approach.

“No measure alone can solve climate change,” Springmann told IFLScience. Although veganism is “one of the main ingredients” required to tackle it.

Smith agrees. “There is no magic bullet,” he told us, “but it can make a big contribution.”

And it won’t necessarily require every last one of us to make the change for this contribution to be realized, Smith added.

Good news for the climate-conscious reluctant vegans among us. And for the planet, as well, as Springmann concedes that it’s “not super likely” that everyone on the planet will eventually go vegan.

Getting to a point where enough people are vegan, or sufficiently reducing their meat intake, that we rely less on animal agriculture will require a mix of personal initiative and political support, Springmann says.

And even if we get there, solving the problems of animal agriculture alone won’t magically fix this mess. As mentioned above, the energy and industry sectors are the largest contributors to global greenhouse gas emissions. Transport, other land use, and buildings also contribute their fair share. And let's not forget other energy-guzzling processes, such as bitcoin mining, which produce as many emissions as entire countries.

We have become accustomed to churning out obscene levels of emissions and, clearly, something’s got to give.

It might be just one of many changes necessary, but veganism is still a valid way we can try and reduce our impact on the planet. And who knows? It might do us – and our four-legged friends – some good too.