The world’s most elusive boa is back after being documented alive and well for the first time in over 60 years.

The Cropan’s boa (Corallus cropanii) is a resident of the Atlantic Forest in southern Brazil. Apart from its appearance, scientists know virtually nothing about the snake since it has never been seen in the wild by a researcher.

This specimen was found thanks to a massive call-to-arms by biologists from the University of São Paulo’s Museum of Zoology and the Butantan Institute. They handed out posters and leaflets to locals living in and around the forest in the hope of whipping up awareness of the super-rare snake, Brazilian newspaper Estadao reports.

Typically when the locals saw this intimidating snake, they’d either kill it or run, unaware of its value and rarity. The posters instructed them how to identify the snake and safely capture it in a bucket, followed by the Whatsapp and email address of chief researcher, Bruno Rocha of the Butantan Institute. 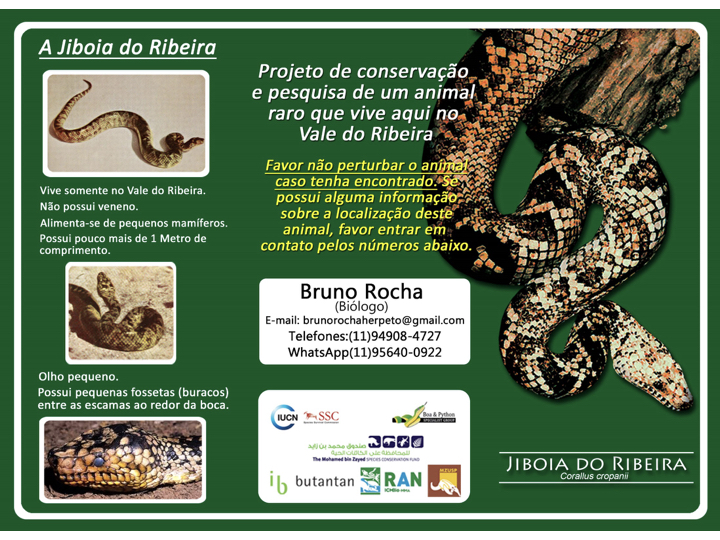 The poster handed out for the locals to identify the snake. University of São Paulo’s Museum of Zoology/Butantan Institute.

The plan worked. On January 21, two young people from the local community identified a 1.7-meter-long (5.5-foot) female snake and quickly called up the Butantan Institute.

"When I arrived and saw that it was itself, alive and beautiful, I was very moved," Rocha told Estadao. "She was in a bucket, with the folks around her with our flyer in hand, comparing it to the snake in the photos."

The species was originally described in 1953 by herpetologist Alphonse Richard Hoge, also from the Butantan Institute. Since then just five more have been documented at the institute, all of which have already been dead.

The snake is being kept safe by the same pair who originally found it on the road. This was part of an active decision by the researchers who want to inspire the local community to appreciate and learn about their surrounding ecosystem. In the meantime, they're also looking forward to studying how the species behaves in the wild for the very first time.

“Let's see if she's going to climb a tree or get under a rock. We simply do not know," added Daniela Gennari from the Museum of Zoology.