Of all the breeds of our best friend, Labrador retrievers may be our best friends of all, providing the bulk of seeing-eye dogs, and even saving human lives at the expense of their own. They do, however, really like their food. Now researchers have found a gene that influences canine weight. A specific form associated with obesity is restricted to Labradors and closely related breeds; intriguingly, it seems to be much more common among assistance dogs for the vision impaired.

Our companions are beautiful at any size, but over-eating not only makes Labradors expensive to keep, but can shorten their lives. After several studies showed this is the breed most prone to obesity, Dr. Eleanor Raffan of Cambridge University set out to see what might be responsible.

Raffan examined three genes that have been associated with obesity in other species and studied their frequency in 15 weighty and 18 lean Labrador retrievers. In Cell Metabolism she reports that 10 of the obese dogs were missing some of the usual DNA for the POMC gene, but this only applied to two of the lean dogs.

The variation she found resembles a human version known to be associated with a lack of feeling of satiation after eating. Raffan expanded her sample to 310 Labradors and found the shortened form of POMC appeared with a frequency of just 12 percent. Where it exists, however, it is associated with being an average 2 kilograms (4.4 pounds) heavier and the food-seeking behaviors so common in the breed – scavenging for scraps and frequent (and adorably hard to resist) begging for food. The paper notes weight gain might be even greater if dogs had more control over their food and exercise. 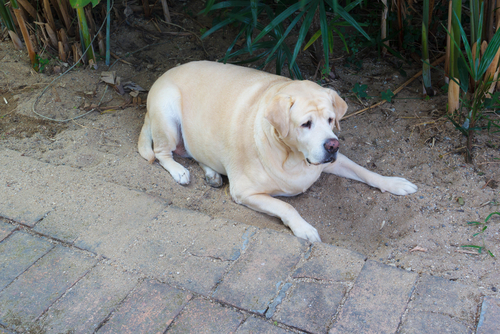 Could you resist those pleading eyes? Us neither. KellyNelson/Shutterstock

"We've found something in about a quarter of pet Labradors that fits with a hardwired biological reason for the food-obsessed behavior reported by owners," Raffin said. "There are plenty of food-motivated dogs in the cohort who don't have the mutation, but there's still quite a striking effect."

Although the POMC variation occurs in 23 percent of Labrador retrievers, it was not found in most dog breeds. The exception was other flat coat retrievers – close relatives of Labradors. The effects in terms of behavior and weight gain did not vary with breed.

However, perhaps the most remarkable thing about the study was that the genetic variation is almost four times as common among assistance dogs. Raffan admitted this could be a reflection on her limited sample of assistance dogs, but there is also a more interesting possibility; that in some way the POMC variation is also associated with features that make Labrador puppies more likely to be selected for guide dog school. 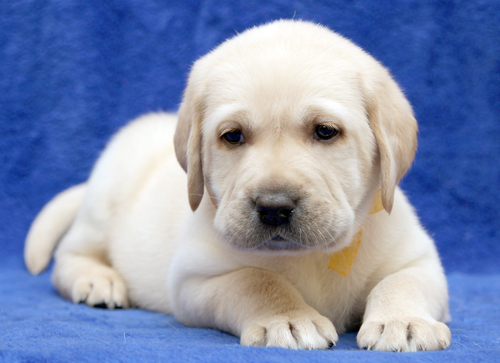 Does the deletion that makes some Labradors prone to obesity also make those puppies more promising guide dogs? Omelianenko Anna/Shutterstock