A state of emergency was declared in Pawnee, Oklahoma on Saturday, September 3, as a powerful M5.6 earthquake shook the state. Felt as far as Chicago around 1,110 kilometers (690 miles) away, this tremor was the state’s most powerful since November 2011, when another 5.6M quake occurred in Lincoln County.

Fortunately, only one person was injured, and just a handful of buildings were damaged. “I'm glad to hear no one was seriously hurt in today's earthquake and damage appears to be limited,” Governor Mary Fallin told reporters shortly after the event took place, as reported by NBC News.

However, there is something rather mysterious about this tremor. Most occur along major fault lines, particularly those along tectonic boundaries. Within the US, the San Andreas Fault running through California is easily the most well-known, and will one day be responsible for a truly catastrophic, highly damaging, death-dealing quake.

Oklahoma is far from any such boundaries, so what exactly caused this recent rumbling? Some evidence points towards an uptick in regional fracking and wastewater disposal, but first, let's look at what released all that energy on Saturday.

According to the United States Geological Survey (USGS), this quake took place in the core of the North America tectonic plate. Although there aren’t any grinding, grating, colossal tectonic plates here – either sliding past each other or over and under one another, to generate stress – smaller faults still exist, and it appears two segments within the plate itself suddenly slid past each other after getting stuck.

After the main event took place, additional stop-start sliding continued, generating several aftershocks. As the primary earthquake happened right within the shallow crust at a depth of just 4.5 kilometers (2.8 miles), the shaking intensity was extremely high. If the epicenter was located right on or next to the built-up Oklahoma City, the damage would have been far worse than it turned out to be.

This mechanism is known as “intraplate” faulting, and it is a poorly understood phenomenon. Either generated by minor faults or hidden “mantle scars” left over from the beginning of plate tectonic movement billions of years ago, quakes in these areas are incredibly difficult to predict, as there is no major tectonic fault movement to track. 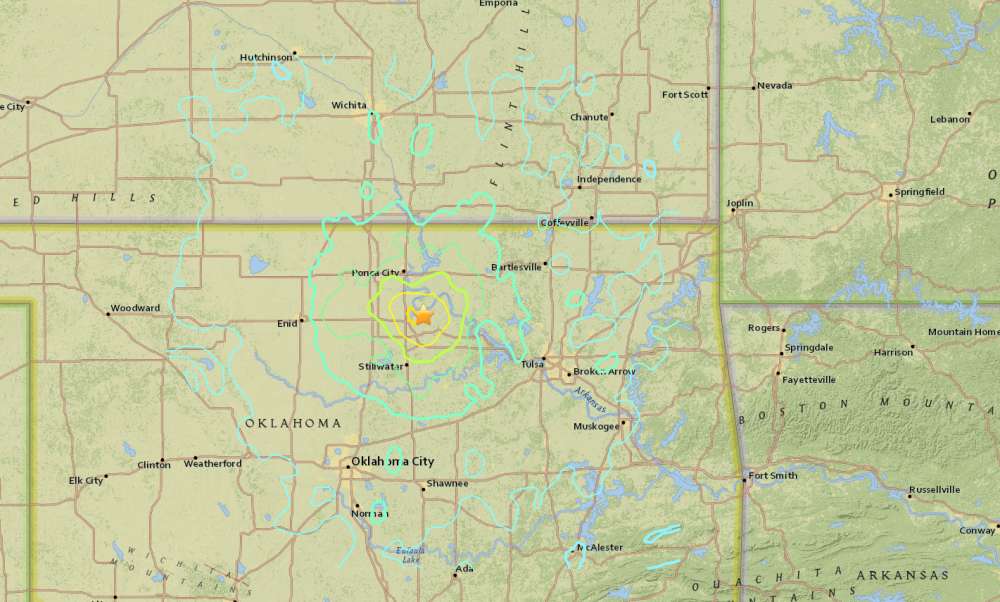 The star marks the epicenter of the quake, with the yellow and green encircled areas feeling the majority of the shaking. USGS

The USGS point out that areas across the central and eastern United States (CEUS) have been experiencing a rapid increase in the number of “induced” earthquakes over the past seven years – with Oklahoma experiencing around ten times more than what would normally be expected. The key to their origin is in their use of the word “induced.”

Numerous studies have linked these quakes to wastewater injection through deep wells in various locations. Along with other potential mechanisms, including oil recovery and fracking processes, humans are destroying the underlying geology to such a degree that faults that were previously stuck suddenly have space to jut forwards. As they do, they release energy in the form of earthquakes.

The USGS are keen to stress that, although more research is needed to confirm this link, the circumstantial evidence is certainly fairly compelling.

Kansas serves as a good case study in this regard. Both Kansas and Oklahoma saw a jump in the number of quakes greater than 3.0M since 2010, but only the former began to limit its wastewater disposal. Kansas saw a 60 percent drop in quakes, but Oklahoma’s continued to rise.

In terms of other intraplate quake-prone regions, the nearby New Madrid Seismic Zone (NMSZ) is one that seismologists are fairly concerned about. Three unexpected ruptures occurred in the NMSZ between 1811 and 1812, with one registering at 7.7M. If this happened today, it would cost $300 billion in damages and kill many people.