The astounding beauty and biodiversity of shallow sea coral reefs are easily appreciated and explored by us humans thanks to their proximity to the water’s surface. In many cases, all one needs to explore these ecosystems is a mask and snorkel. But it wasn’t until the advent of advanced scuba gear and submersibles that marine scientists began documenting the wonders of twilight zone reefs: the unique coral-based habitats found throughout the world’s warm oceans at depths of 60 to 152 meters (200 to 500 feet).

As such, expeditions into this mesophotic habitat – the curious slice of the water column between the brightly lit euphotic zone and the dim dysphotic zone where photosynthesis is impossible – are continually introducing us to new plant and animal species.

The latest deep reef denizen to be officially described in the annals of human discovery is a vividly colored fish so entrancing that it was named after the Greek goddess of beauty and love herself. A team of reef researchers from the California Academy of Sciences happened upon Tosanoides aphrodite while surveying the ecosystem surrounding an archipelago called St Paul’s Rocks, located 965 kilometers (600 miles) off the coast of Brazil. 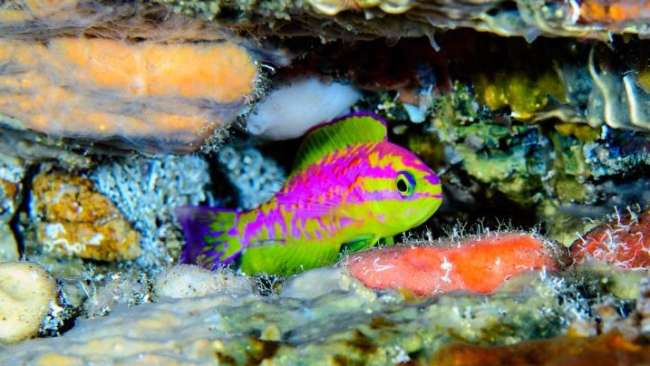 "This is one of the most beautiful fishes I've ever seen," Dr Luiz Rocha, the Academy's Curator of Fishes, recalled in a statement. "It was so enchanting it made us ignore everything around it."

Indeed, a video camera captured the moment when Rocha and colleague Dr Hudson Pinheiro first spotted T. aphrodite, perched in a rocky outcrop at 121 meters (400 feet), and were so besotted that they failed to notice that a 3-meter-long (10-foot) sixgill shark was curiously circling above them.

After the shark came and went peacefully, Rocha and Pinheiro were able to collect several specimens of the species, which they transported back to their lab in San Francisco. With refined analytic tools at their disposal, the team was able to (non-invasively) examine the fish more closely, though all it takes to appreciate their appearance is a flashlight: males sport bright yellow and pink stripes whereas females are a solid red-orange color. Pinheiro explains that most fish in deep reefs are pink or red in color, as red light does not penetrate that far into the water, and thus the animals are largely invisible to would-be predator

A DNA analysis determined that the creature belonged to the Tosanoides genus. It is the first member of this group to be found living in the Atlantic. According to the scientists, who have published their full description of T. aphrodite in the journal ZooKeys, it is likely that the species is endemic to the St Paul’s Rocks area. These remote formations, outcroppings of solidified lava that was pushed up into the ocean at the tectonic boundary of the Mid-Atlantic Ridge, are home to many organisms that appear to live nowhere else on Earth.

"[St. Paul's Rocks] is very isolated and such a small island that very few species were able to colonize [it]," Pinheiro told IFLScience. "This characteristic makes St. Paul's Rocks one of the best places on Earth to study marine biodiversity, ecology, and evolution because it is easy to understand the origin of the life on the island and how communities work."

"It is not easy and sometimes it is a risky activity, but it is rewarding to uncover what these unknown ecosystems shelter. We have been exploring shallow reefs for many years, so it was a natural progression to check out what was just a little bit deeper—discovering the connections and differences—and today we are able to go so deep that pretty much everything is unique."