Something curious happened over the European skies in January. Control stations from Spain all the way to the North of Finland detected an increase in radioactive isotope Iodine-131 and nobody is sure where it came from.

The unusual detection was announced in a press release by the French Institute of Radioprotection and Nuclear Safety (IRSN) and they stressed that Iodine-131 was detected as dust grains in the atmosphere rather than its most common counterpart, which is found in gaseous form.

“The preliminary report states it was first found during week two of January 2017 in northern Norway,” the IRSN reports. “Iodine-131 was also detected in Finland, Poland, Czech Republic, Germany, France, and Spain, until the end of January.”

The weather was particularly bad over the week, making it difficult to identify where the emission was coming from. In winter, the air tends to undergo thermal stratification, making it difficult for the atmosphere to mix itself up so pollutants are not dispersed quickly. 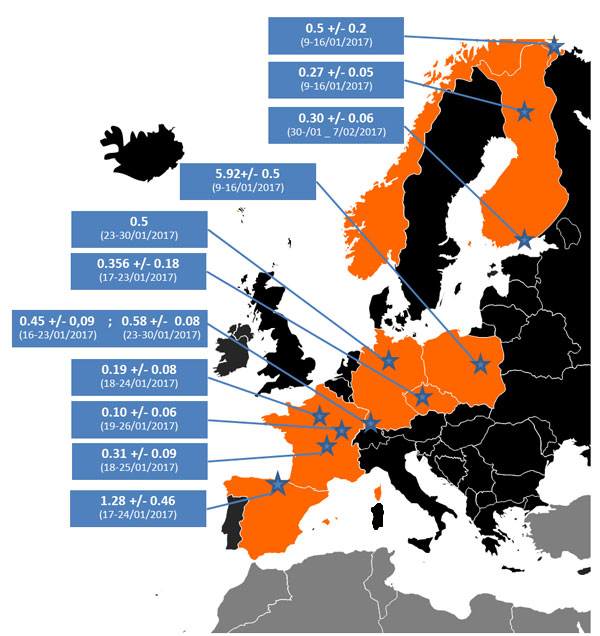 Particulate Iodine-131 density in the atmosphere during the second week of January. IRSN

Considering the weather and the radiation reading the source must have been local, although IRSN doesn’t speculate where it came from. But there’s no doubt that the iodine-131 was manmade. The isotope is used in medical imagining to study the thyroid and in several industrial processes.

The radioactive isotope has a half-life of eight days. This means that in just over a week, half of a sample of Iodine-131 would have decayed into Xenon. It is produced by shooting neutrons at tellurium, a brittle rare metal often used to make copper and steel alloys.

Facilities that handle Iodine-131 should have detectors that warn about leaks so either somebody was being careless or knows about the radioactive released and has kept quiet.

Nature
How Did Birds Survive While Dinosaurs Went Extinct?