An expedition to the depths of the New Hebrides trench has found it inhabited by different life forms from other deep ocean trenches. Shockingly, the researchers think even in these locations, the most remote on the planet from human influence, climate change may be a threat.
Deep sea-trenches occur when an oceanic plate is pushed under another plate. Although trenches can be thousands of kilometers long, they’re so narrow they take up only a small portion of the globe.
The phenomenal water pressures within the trenches make them a challenge to explore, leading to the observation that we know less about the bottom of the ocean than we do about the surface of the Moon.
The New Hebrides trench, 7km deep and 1500km north of New Zealand has been particularly neglected in the past, and when a mission visited it using an underwater robot late last year they were surprised with the images returned.
“What we found was an entirely different deepwater fish community. Fish were surprisingly few in number and low in diversity and not at all what we expected. The fish we would always expect to see, the grenadiers, were completely absent. The fish that dominated the area were a group called cusk eels which are far less conspicuous elsewhere,” said Alan Jamieson of the Oceanlab at the University of Aberdeen, UK. “As well as the difference in biodiversity we also stumbled across another surprise - the area in and around the New Hebrides Trench was swarming with large bright red prawns which are typically seen in very low numbers in other areas.”
While the depths of the trenches might be expected to resemble each other more than the waters above, Jamieson believes differences in the surface waters may be responsible. "If you look at the New Hebrides trench, and where it is geographically, it lies under very unproductive waters - there is not a lot happening at the surface of the tropical waters. It seems the cusk eels are specialists in very low food environments, whereas the grenadiers require a greater source of food.”
Film director James Cameron famously became the first person to travel to the bottom of the deepest trench of all, the Mariana, for 50 years in 2012. Cameron described the depths as almost devoid of life. While this might have been a result of the 1000 atmospheres of pressure crushing all but the hardiest creatures, it is also possible that the distance from the continental shelf is more significant, with nutrients less likely to be washed down in such locations.
“These new finds are a stark reminder that even the deepest parts of the world are intrinsically linked to the productivity of the surface waters,” said Jaimieson. “Should the current system change, it is highly likely to have significant cascading effects on the deep sea community. The deep sea is potentially a kind of silent victim in the era of a changing climate.”
Along with a camera the remote controlled vehicle carried bait equipment, and returned samples now being curated by Australian and New Zealand museums. 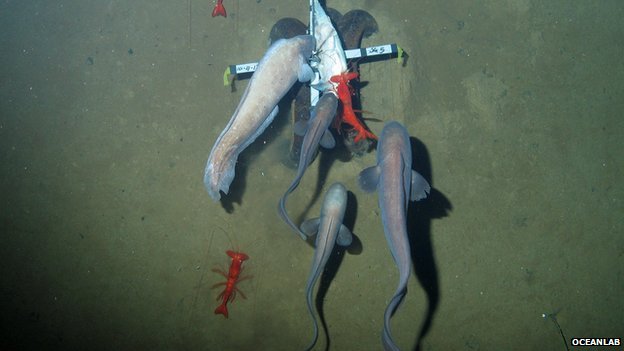 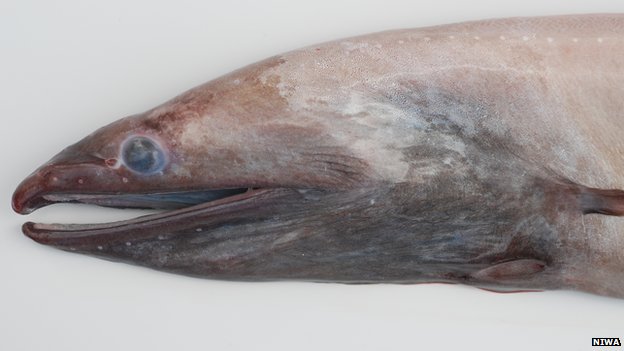 This arrow eel was retrieved from the depths. Credit: NIWA
Nature
Rare Two-Headed Egg-Eater Snake Found In The Wild In South Africa
animals