Naked mole rats (Heterocephalus glaber) have presented a puzzle to biologists for many years, as they live much longer than is expected of animals of their size. A new theory on how they manage this suggests its all about protecting the young so they can afford to grow up slowly.

Intriguingly, humans appear to be a following in the mole rat's naked footsteps, evolving to have longer lifespans, and not just through the benefits of medical technology.

Naked mole rats are rodents but not rats, and even less closely related to moles. They are probably most famous for being considered one of the ugliest creatures around. After that comes their resistance to cancer. Although reports last year showed that this resistance is not absolute, with four mole rats found to have tumors, it is still agreed that cancer is much rarer in the mole rat than other mammal. Even those who do get cancer survive much longer than their counterparts in other rodent species.

Near immunity to cancer certainly helps with life expectancy, and who knows, maybe being that ugly means no one wants to eat you. Nevertheless, those factors alone cannot explain how naked mole rats have a life expectancy of around 30 years, when most mammals their size are lucky to make it past six.

According to Moscow State University's Professor Victor Sadovnichii, somewhere in their burrowing under the African deserts, naked mole rats discovered the fountain of youth and have been drinking from it ever since. In Physiological Reviews, Sadovnichii attributes mole rats' longevity to their social structure, which has allowed them to prolong their youth. This has slowed down both their maturation and aging processes, or what Sadovnichii calls their Master Biological Clock.

Slowing the clock has caused the naked mole rats to maintain many features of youth that pass quickly in other animals.

For example, many mammals when young have a glutamate receptor, GluN2D, in their brains, which decreases dramatically as they age. GluN2D protects against damage to brain cells from reactive oxygen. Naked mole rats, on the other hand, have levels of GLUN2D as an adult that are closer to those of the young of other rodent species. Likewise, naked mole rats maintain the ability to produce new neurons and have them migrate to parts of the brain where they are required, long after other mammals have lost this. Even the naked mole rat's mitochondria barely appear to age.

Humans also have lifespans longer than other mammals our size, although not quite to the degree naked mole rats manage. Sadovnichii and his co-authors note that we also maintain a greater capacity, at least in some parts of the brain, to produce new neurons.

What we have in common with the naked mole rat, aside from a relative absence of hair, is a complex social structure, although we don't take it to quite the extreme they do. Naked mole rat breeding resembles that of social insects rather than other vertebrates. A “queen” and her “husbands” monopolize breeding. Up to 300 subordinates have to wait their turn if they are ever to get to mate. Where most mammals become less fertile with age, naked mole rats increase their reproductive success as they get older, since they are more likely to become one of the community's favored breeders.

Why wouldn't all animals use the same tricks to live longer? Perhaps because the need to grow up fast sets the biological clock ticking furiously, and this becomes hard to slow down. Childhood is a dangerous time for solitary animals – they need to mature rapidly to survive predators.

The paper argues that our societies, like that of the naked mole rats, have lowered the pressure of natural selection, since most human communities take care of our own, not letting people die unnecessarily if we can help it.

If Sadovnichii is right, by protecting our young over many generations, both humans and naked mole rats have slowed down the processes that rush animals to maturity. Our reward is biochemistry that also allows us to enjoy much longer adult lives.

Since mole rats have done this to a much greater extent than humans have, the authors argue, there should be potential to take the process further, extending the human lifespan, possibly with the side effect of delaying the age at which we mature. 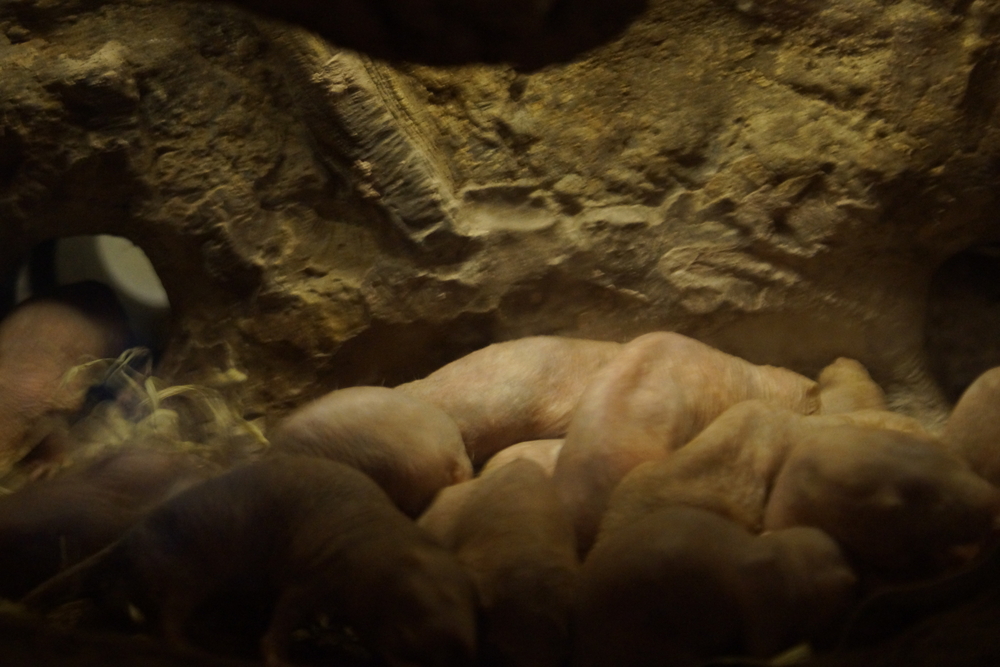 By protecting their young naked mole rats set themselves up for much longer lifespans. Anything we could learn? Poetic penguin/Shutterstock