The Earth's climate has changed 170 times faster in recent years than the previous 7,000. This is just one example where human influence is overwhelming the geological and biological processes that dominated previously.

The authors also put this comparison in context, placing it within a longer sweep of time and among other global changes.

Although the Holocene era since the end of the last Ice Age was fairly stable until humans started mucking with the thermostat, the Quaternary (or last 2.6 million years) has seen unusually large and frequent swings in planetary temperature compared to Earth's history. Steffen explained to IFLScience that this was predominantly the result of the amplifying effect of expansion and retreat by the Northern Hemisphere ice cap.

Consequently, the paper notes: “Homo sapiens evolved during a rather unusual state of potential instability in Earth’s history.” In another era, we might have been able to mess around with the planet's atmosphere without such severe climatic consequences.

This schematic shows how the rate of change from the interglacial temperatures to those we have created has been much more rapid than from Ice Age to interglacial. Gaffney and Steffan/The Anthropocene Review

Even during the last great warming event, the Paleocene-Eocene Thermal Maximum 56 million years ago, when billions of tonnes of methane was released from oceanic hydrates, Steffen said temperatures rose at a tenth their current rate.

All along, the rate of change was a function of astronomical forces such as the tilt of the Earth's axis, geophysical forces like volcanic eruptions, and internal dynamics, including the way biological systems responded to these two. Today, human influences overshadow them all.

“We are not saying the astronomical forces of our Solar System or geological processes have disappeared, but in terms of their impact in such a short period of time they are now negligible compared with our own influence,” Steffen said in a statement. The paper argues that the Anthropocene began in 1950, when human forces outstripped natural ones.

Similarly, biological processes have been turning nitrogen gas into reactive nitrogen for billions of years, but humans have doubled the concentration since the invention of the Haber-Bosch process a century ago. 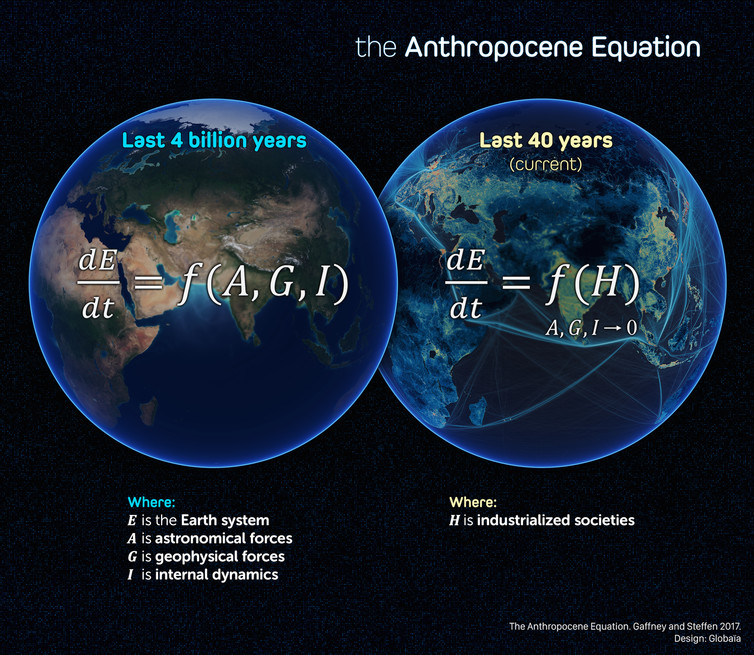