The sex of many turtles, lizards, and other reptiles is determined by temperature; embryos growing in eggs develop either ovaries or testes depending on how hot it is. Now, researchers working with snapping turtles have identified the first gene linked to sex determination in response to temperature. Their findings, published in Genetics this week, could help predict how reptiles and their sex ratios will be impacted by climate change.

Temperature-dependent sex determination was described several decades ago. For instance, in the common snapping turtle (Chelydra serpentina), females develop at low and high incubation temperatures, while males are produced at intermediate temperatures. Shifting eggs from a male-producing temperature (26.5°C / 79.7°F) to a female-producing one (31°C / 87.8°F) for just five days during their 65-day incubation period is enough to induce ovary development in all embryos.

While researchers have identified many genes that are expressed differently at male- and female-producing temperatures, we don’t really understand what molecular mechanisms regulate this temperature sex switch. Previous work identified cold-inducible RNA-binding protein (CIRBP) as a candidate gene. It’s activated in the gonads within 24 hours of a temperature shift. 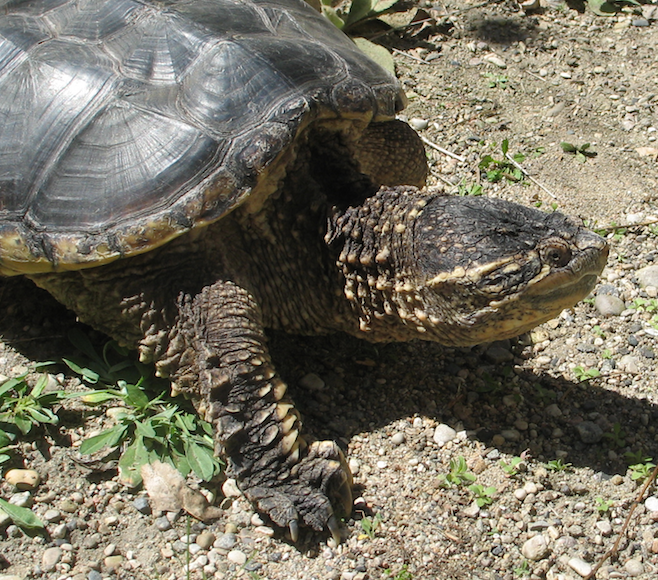 To study the influence of CIRBP on sex determination, a team led by Turk Rhen from the University of North Dakota, Grand Forks, collected adult snapping turtles and eggs from nests in Minnesota and Texas over the course of several years. They conducted egg incubation experiments and studied their DNA sequences.

The team found that some of the turtles carry a slightly different version of CIRBP: Instead of an “A” base at one specific location in the gene sequence, they have a “C” base. This single-letter change makes the gene unresponsive to temperature, and turtles carrying two copies (one from mom, one from dad) of this “C” version were more likely to be male. This one difference accounts for a quarter of the genetic variability in sex determination temperatures.

"CIRBP seems to play a crucial role in sex determination," Rhen said in a statement. "The striking part is that we see a consistent association across multiple levels of biology: The variation at the DNA level influences the gene's activation (expression into RNA messages), which is in turn correlated with whether an individual turtle becomes male or female. That association with sex holds whether we look at individuals or families, and we even see differences at the population level."

The “C” version of CIRBP is more common in turtles from northern Minnesota than turtles from the southern part of the state. And it’s not found in turtles from even farther south in Texas. That means that subpopulations of this species have adapted to their local climate. Even if northern eggs and southern eggs were incubated at the same 26.5°C (79.7°F) temperature in the lab, those collected from the north will produce nearly all males while those from the south will become mostly females. The “A” version is more common in areas where females are produced at a lower temperature.