And lo, it has come to pass: All those images of cats that power the Internet have been put to scientific use. Well not all kitten photos, but the ones of them squeezing into boxes that barely fit them. Like this: 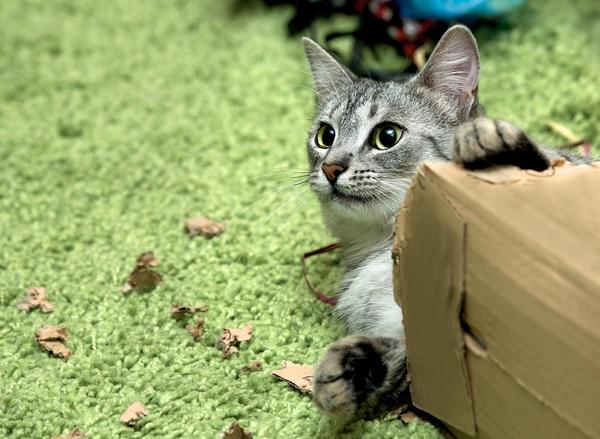 Veterinary scientists from the University of Utrecht have answered the question we have all be asking, “Will a hiding box provide stress reduction for shelter cats?” They provide their answer in Applied Animal Behaviour Science.

Spoiler warning: The answer is yes. In the authors' words, “The application of hiding boxes decreases stress in shelter cats, at least in the short term.”

As much fun as this research sounds, it has a serious purpose. “Domestic cats (Felis sylvestris catus) can experience serious stress in shelters,” the authors write. These not only make for unhappy cats but also affect their immune systems, increasing outbreaks of infectious diseases.

The team led by Dr. Claudia Vinke randomly divided a sample of cats arriving at a shelter into a group that would be provided with a hiding box and one that would not. The behavior of the cats was observed over a fortnight and assessed using the Kessker and Turner Cat-Stress-Score (CSS). Yes, that's a thing.

By day 3, the cats with hiding boxes had lower CSS scores on average, as well as less variability. Some cats without boxes were just fine, but others showed signs of stress much greater than any of the box-provided cats. Stress levels for the cats without boxes fell with time, and by day 14, they caught up with the luckier members of their species.

The sample size of just 19 cats was small, but the paper concludes, “The hiding box appears to be an important enrichment for the cat to cope effectively with stressors in a new shelter environment the first weeks after arrival.” They hope to extend the work to longer-term studies and to consider cats housed collectively.

Exactly why cats love boxes so much is a harder subject for scientific explanation, although Wired explores some theories, including that they like the warmth and that it is a way for a relatively solitary species to hide from social engagements.

The finding is already being put to use by one charitable organization, who are seeking donations to buy “Cat Castles” for shelter cats.

Nature
The Canada Goose Is Winning The War With Humans