The Arctic has everything going against it. Not only do warm ocean currents preferentially head towards it, but it also undergoes a phenomenon called Arctic amplification, wherein the lack of sea ice is allowing the Sun to heat the sea there without impediment.

Now, a new Nature Communications study has revealed for the first time that the effects of Arctic amplification have reached Greenland, which contains the world’s second-largest ice sheet. If it was all to melt, it would raise sea levels by 7 meters (23 feet).

In order to track whether or not Arctic amplification was occurring over Greenland, the team of researchers looked to the jet stream, a high-altitude funneling of air that separates frigid northern air from far warmer southern air masses.

A shrinking temperature difference between the region and areas further south, thanks to Arctic amplification-relating warming, would cause the jet stream to slow down. This jet stream deceleration would cause it to kink and bend erratically, perhaps allowing far warmer air masses to move upwards over the Arctic Circle.

This precise northern swing was tracked by the researchers last year, showing that it reached record-breaking high latitudes during the summer months. This warmer air also brought with it clear skies, which allowed the Sun to start melting away parts of Greenland’s ice sheet with unadulterated fury. This led to Greenland experiencing both unprecedented temperature highs and melting in 2015, particularly during the summer months.

“If loss of sea ice is driving changes in the jet stream, the jet stream is changing Greenland, and this, in turn, has an impact on the Arctic system as well as the climate,” lead author Marco Tedesco, a research professor at Columbia University's Lamont-Doherty Earth Observatory, said in a statement. “It's a system, it is strongly interconnected and we have to approach it as such.”

Thanks to man-made climate change, the sea ice extent in the Arctic has dramatically shrunk over the last four decades. In fact, just this May, the sea ice extent set a record low every single day. Without this hyper-reflective ice around, the incoming solar radiation slowly warms the dark northern waters.

The ocean, once heated, retains its heat for a long time, which promotes the melting of sea ice in the conventionally colder northern latitudes. Warmer waters lapping up against the ice shelves of Greenland also become unstable and collapse into the sea, allowing massive glaciers blockaded behind them to slip into the ocean.

All in all, there will be more warm water than before, which will only continue to warm. This, in short, is Arctic amplification, and it explains why the Arctic is warming faster than any other region on the planet; the jet stream phenomenon documented by this study is yet another feature related to it. 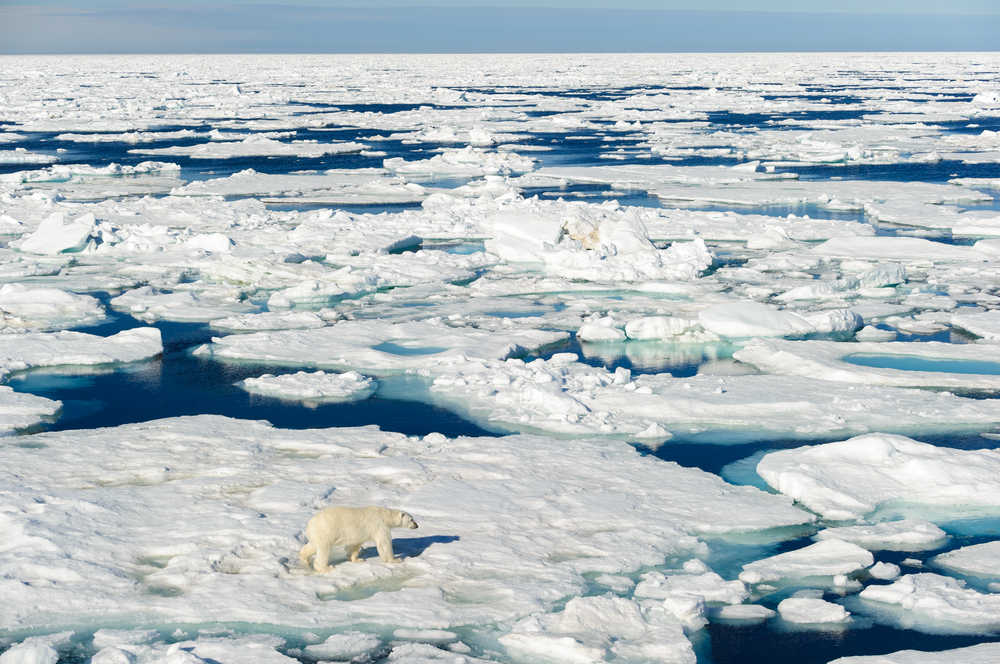 A future without any Arctic sea ice at all is a distinct possibility. DonLand/Shutterstock

Arctic amplification is having a dramatic, observable effect on the north. Greenland’s vast ice sheet, for example, began to experience ludicrously early melting just this year, with at least 12 percent of it thawing out by April thanks to sustained, summer-like temperatures.

In addition, the amount of anomalously warm days in the region are literally off the charts. As study after study keeps revealing, even the most pessimistic estimates about the Arctic’s immediate future are turning out to be optimistic when the real data is taken into account.

Gif in text: The polar jet stream can be seen here (x) moving up over Greenland during June and July of 2015, bringing warmer (yellow) air into a conventionally colder (blue) atmospheric environment. Marco Tedesco/LDEO