When Eric Carle wrote The Very Hungry Caterpillar, he launched a phenomenon, selling well over 30 million copies. Even Carle, however, might not have expected the discovery of a species of caterpillar so ravenous it will snack on shopping bags. The discovery could open up options for reducing the billions of pieces of plastic destroying the oceans.

Dr Federica Bertocchini of the Institute of Biomedicine and Biotechnology of Catabria, Spain, is an amateur beekeeper when not studying chameleon embryology. When encountering wax moth worms, which feed on beeswax, Bertocchini put the worms in plastic shopping bags prior to disposal. Subsequently, she noticed the bags became riddled with holes. With a scientist's eye for something unexpected, Bertocchini decided to investigate further by exposing a hundred worms to ordinary plastic bags provided by a UK supermarket.

Within 40 minutes, holes appeared. After 12 hours, Bertocchini measured a reduction of 12 milligrams (0.0004 ounces) in the weight of the bag. After collaborating with Dr Paolo Bombelli of Cambridge University, she published her discovery in Current Biology.

Although this is not the first time lifeforms capable of living on plastic have been found, the speed with which the wax worms act is astonishing. A bacteria that eats polyethylene terephthalate (PET) excited waste scientists last year, but takes six weeks to break down thin-film PET, even under ideal temperature conditions. On the other hand, previous worm species found capable of consuming hard-to-degrade products feed on different plastics, suggesting they might form a useful double act with Bertocchini's wax worms.

Despite being referred to as worms, Galleria mellonella – the species in Bertocchini's hive – are moths, members of the Lepidoptera, so their larvae are actually caterpillars. Even the cocoon in which the caterpillars turn to moths can break down plastic on contact.

It is perhaps surprising the capacity has not been discovered before. Galleria mellonella are widespread around the world and are increasingly used as laboratory models for studying microbial infections.

The bags are polyethylene, 80 million tonnes of which is produced each year, making up 40 percent of Europe's plastic consumption.

When plastic breaks down in the environment, it is usually into smaller pieces that are even more destructive, as they can more easily enter the food chain. However, the wax worms are breaking the chemical bonds in the polyethylene, converting it to harmless ethylene glycol.

"If a single enzyme is responsible for this chemical process, its reproduction on a large scale using biotechnological methods should be achievable," said Bombelli in a statement. Bee's wax, while digestible by a far wider range of living things, contains a lot of CH2-CH2 bonds, as does polyethylene, and it appears that whatever the worms evolved to break it down also works against the plastic.

The challenge will be to bring the wax worms, or their enzymes, into contact with the shopping bags. We already have options for recycling plastic that has been collected, sorted, and cleaned. Bags that have been released into the environment, or mixed up with other materials in landfill, are much harder to attack, but Bertocchini's discovery at least looks like a place to start. 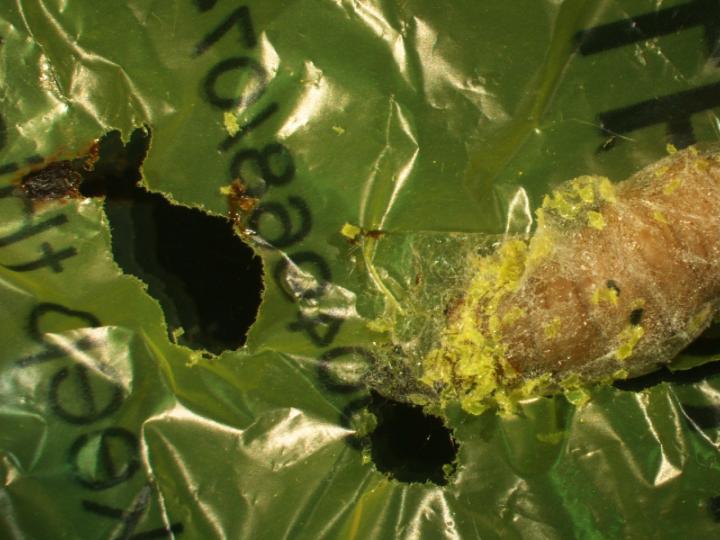 Close up of a wax worm and a bag it is ripping into. Paolo Bombelli