Like them or loathe them, there’s no denying that arachnids would make a very unfussy dinner guest.

Recently, a tarantula was spotted in the wild by scientists munching down on a snake, in behavior that had never been documented before (and we have kindly shared with you above). You can read more about the extraordinary case here.

But this isn’t the only case of spiders, both great and small, being ambitious hunters. Whether it’s through injecting venom, web trapping, or just old-fashioned biting, arachnids are remarkably indiscriminate about what they eat.

Here’s a brief (and by no means exhaustive) history of crazy things that arachnids have been caught filling their fluffy little bodies with.

You might assume that crunchy crustaceans have the perfect armor against spiders, but their exoskeletons are no match for some species of eight-legged creepy crawlies.

In 2016, the journal Southeastern Naturalist described the first documented study of a spider devouring a crustacean. The study explains how a striped fishing spider was spotted eating a spiny stream crayfish, the largest freshwater arthropod in North America.

Typically, this spider preys on small fish by wrapping its legs around their body and finishing it off with a venomous bite. Since the spider was already half-way through its crayfish meal when they came across it, the researchers can only assume that this crustacean suffered a similar fate. 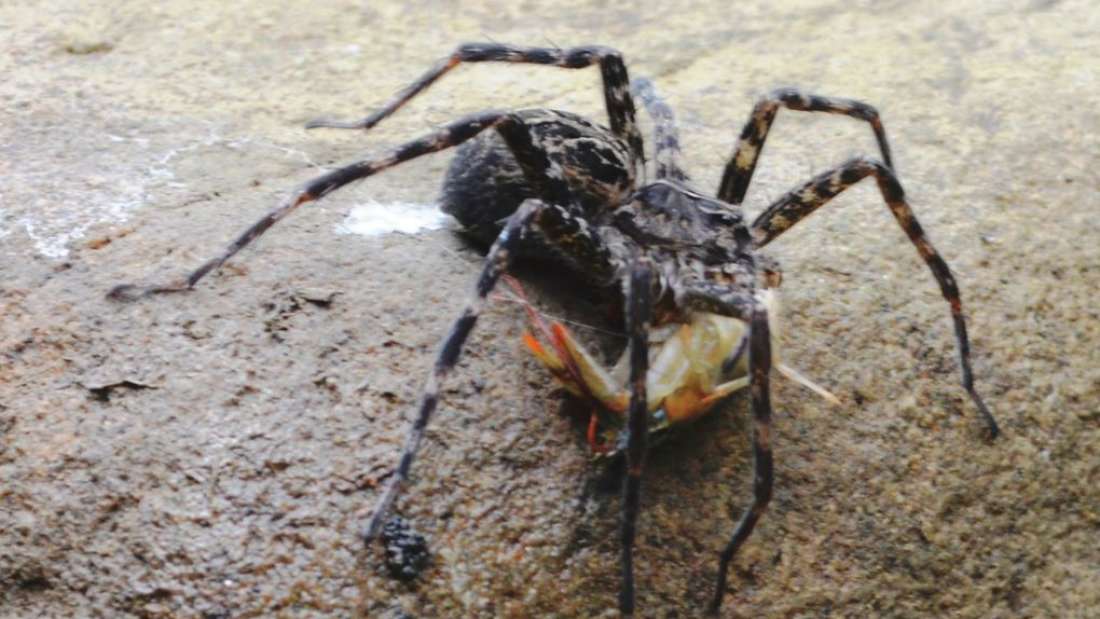 There is a spider that exists called the “Goliath birdeater”, but in reality, its diet mainly consists of insects and small mammals. However, a few years ago in Australia (a land this article will have to revisit many times), someone walked out into their garden to see a Golden Orb Weaver mid-way through a meal of a Chestnut-breasted mannikin bird. Which isn't terrifying at all.

Back to Australia in Queensland where a man caught a huntsman spider dragging a mouse up the side of his refrigerator. While spiders eating rodents is hardly surprising, it's unnerving to see how easily it can hoist prey larger than itself up a slippery vertical surface.

“We have named him Hermie, we have adopted him and he is now running his own extermination business out of our town Coppabella. Oh and he is now paying rent,” Jason Womal, who filmed the video, posted on Facebook.

A couple sat down for a meal in December last year, only to be greeted by a huntsman spider with a leg span of 12 centimeters (5 inches), gripping a helpless gecko in the world's least enjoyable case of a BYO dinner. Once again, thanks Australia.

Don't be lulled into a false sense of security, though. Spiders' hunting techniques don’t always rely on all-guns-blazing brute strength, sometimes they use a combination of trickery and underhand tactics.

More than 300 species of spiders are known to mimic the outward appearance of ants, which science calls myrmecomorphy. Not only have these species evolved to look like ants, but once they have infiltrated a colony, they will mimic the zigzagging movement of ant and even wave its legs in front of its head to look like ant antennas. Once the deception is complete, it’s dinner time.

You can check out some of this barbarous behavior in the video below, with some rather dreamy backing music.

Believe it or not, two species of jumping spiders are specifically adapted for hunting mosquitos, especially if they’re females gorged with blood, as explained in the Journal of Arachnology in 2015.

“Like Bram Stoker’s Dracula or Arnold Schwarzenegger in the James Cameron movie The Terminator, these little specialist predators ignore any other insects that get in the way as they pursue their target victims – mosquitoes,” study author Fiona Cross explained in a statement.

And, of course, back in Australia, a farmer from Weethalle in New South Wales took this photo showing a cellar spider, also known as a daddy longlegs, grappling with a brown snake. Despite the huge difference in body mass, the cellar spider was the undisputed victor.

-
Nature
One Of World's Biggest Moths Seen In US For First Time, Stumping Scientists
animals