London’s Natural History Museum (NHM) has, after much deliberation, just announced the winners of its 52nd Wildlife Photographer of the Year Awards. As has been made clear by the nearly 50,000 entries from 95 countries, there are some extremely talented photographers out there, and nature has never looked so good.

One hundred images made it through to the final round, but there can only be a handful of winners, and here is a selection of them in all their technicolor glory.

“The winning images touch our hearts, and challenge us to think differently about the natural world,” Sir Michael Dixon, Director of the NHM, said in a statement.

The exhibition opens on October 21, but if you can’t make it to London, worry not – the images will make their way across six different continents, so you may be able to catch them as they circumnavigate the globe.

Think you have taken an award-winning image? From October 24, you can send in your entry to next year’s competition here. 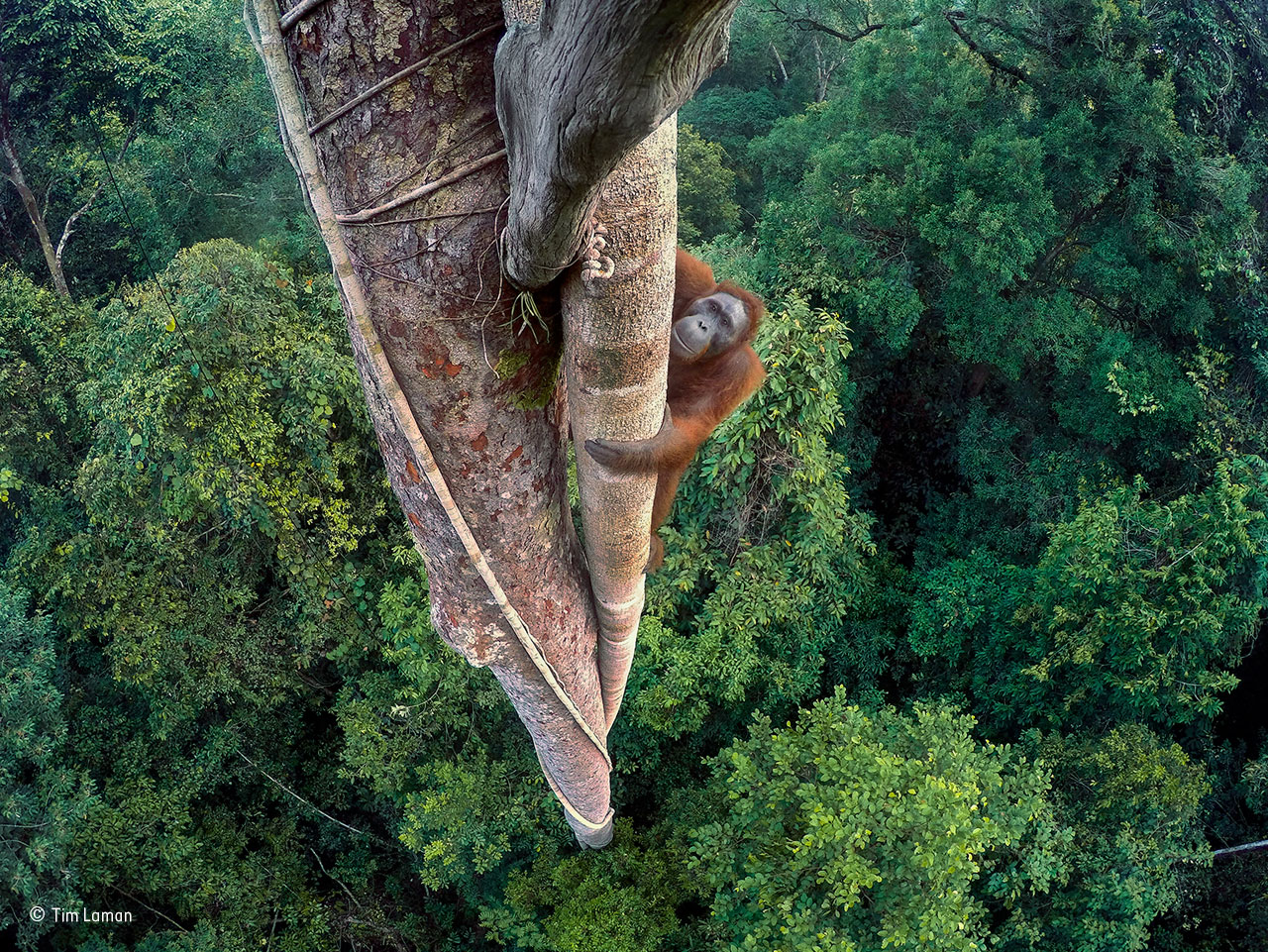 A critically endangered Bornean orangutan holds on to a thick root of a strangler fig that has wrapped itself around a tree 30 meters (roughly 100 feet) above the ground. This particular creature was spotted in the rainforest of the Gunung Palung National Park, one of the few protected orangutan strongholds in Indonesia.

This precarious primate was captured on camera by a remotely-triggered GoPro, which was put in place by the photographer during his own perilous climb. Ripe with symbolism and technical flair, it’s clear to see why this photographer was crowned the overall winner of the competition.

Credit: Tim Laman, from USA/Wildlife Photographer of the Year 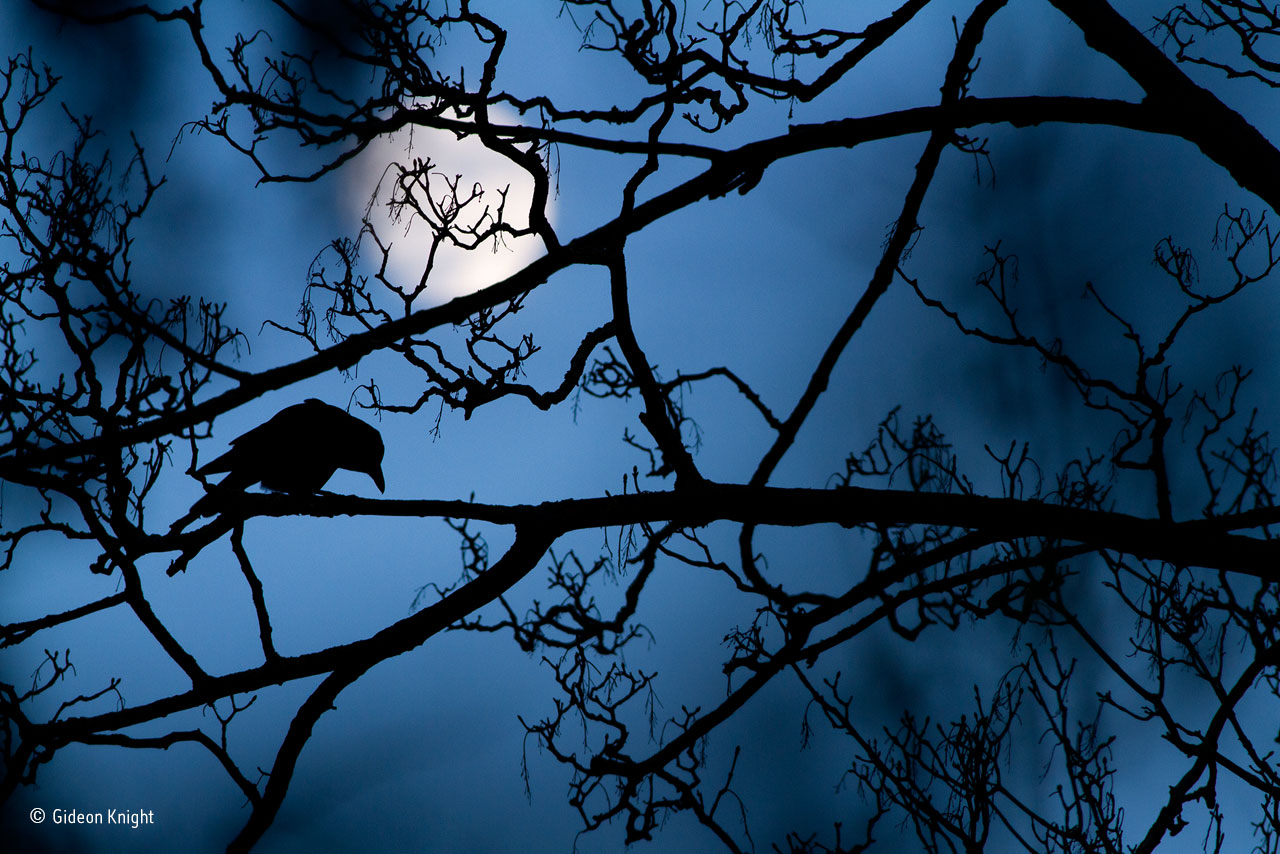 A crow takes on a supernatural air against a lunar backdrop. Shot near his London home in Valentines Park, the nocturnal scene was described by the 16-year-old photographer as “like something out of a fairytale.”

Lewis Blackwell, chair of the jury, said that “if an image could create a poem, it would be like this.”

Credit: Gideon Knight, from UK/Wildlife Photographer of the Year 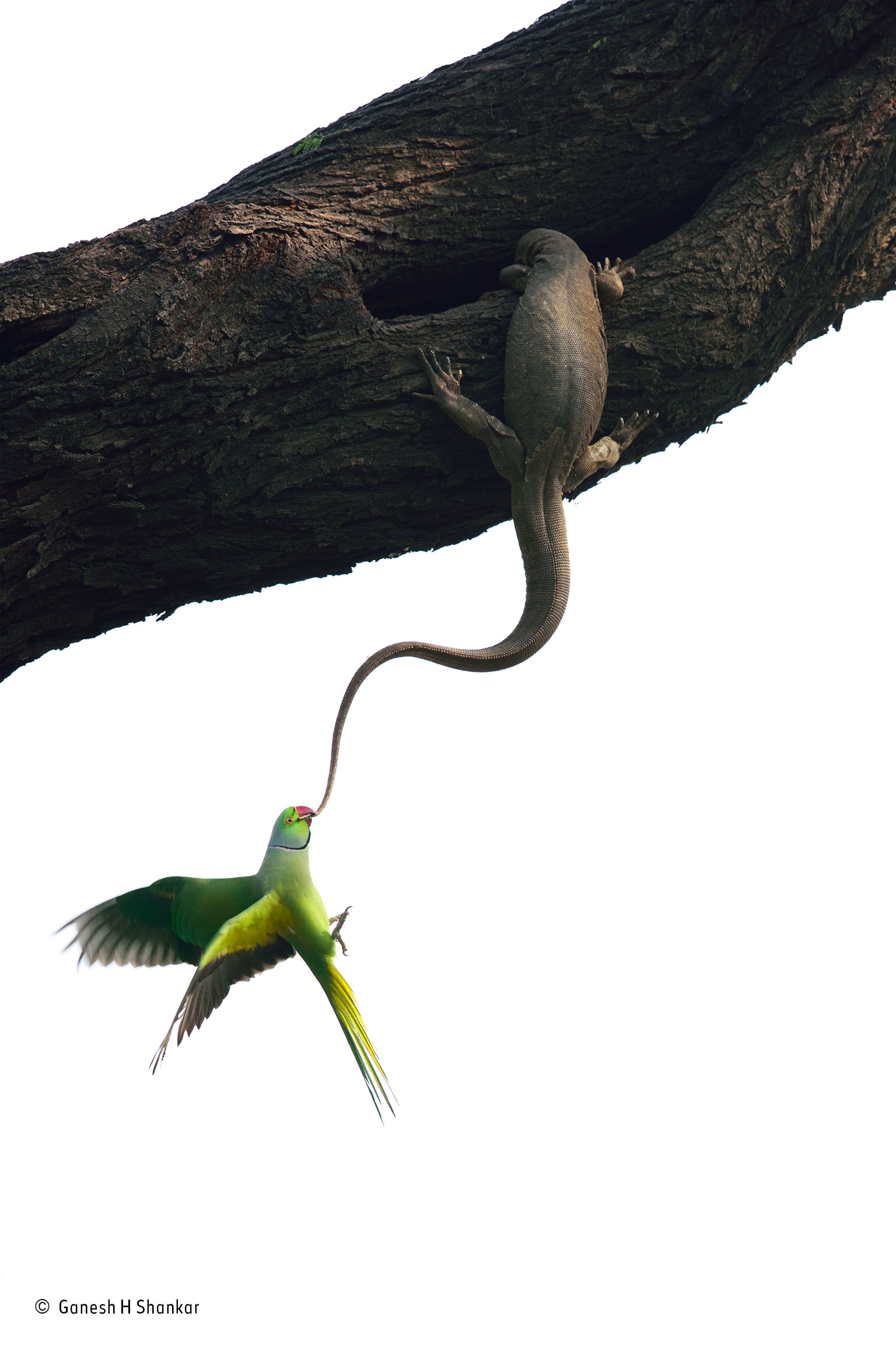 A Bengal monitor lizard attempts to squat inside the nest of a few rose-ringed parakeets in India’s Keoladeo National Park, and it’s safe to say that the occupants were not best pleased. After biting on the lizard’s tail and hanging on for a few moments each time, the sneaky critter retreated. It wasn’t quick to give up entirely, though – the battle for supremacy repeated itself multiple times at lightning speeds over the next two days.

Credit: Ganesh Shankar, from India/Wildlife Photographer of the Year 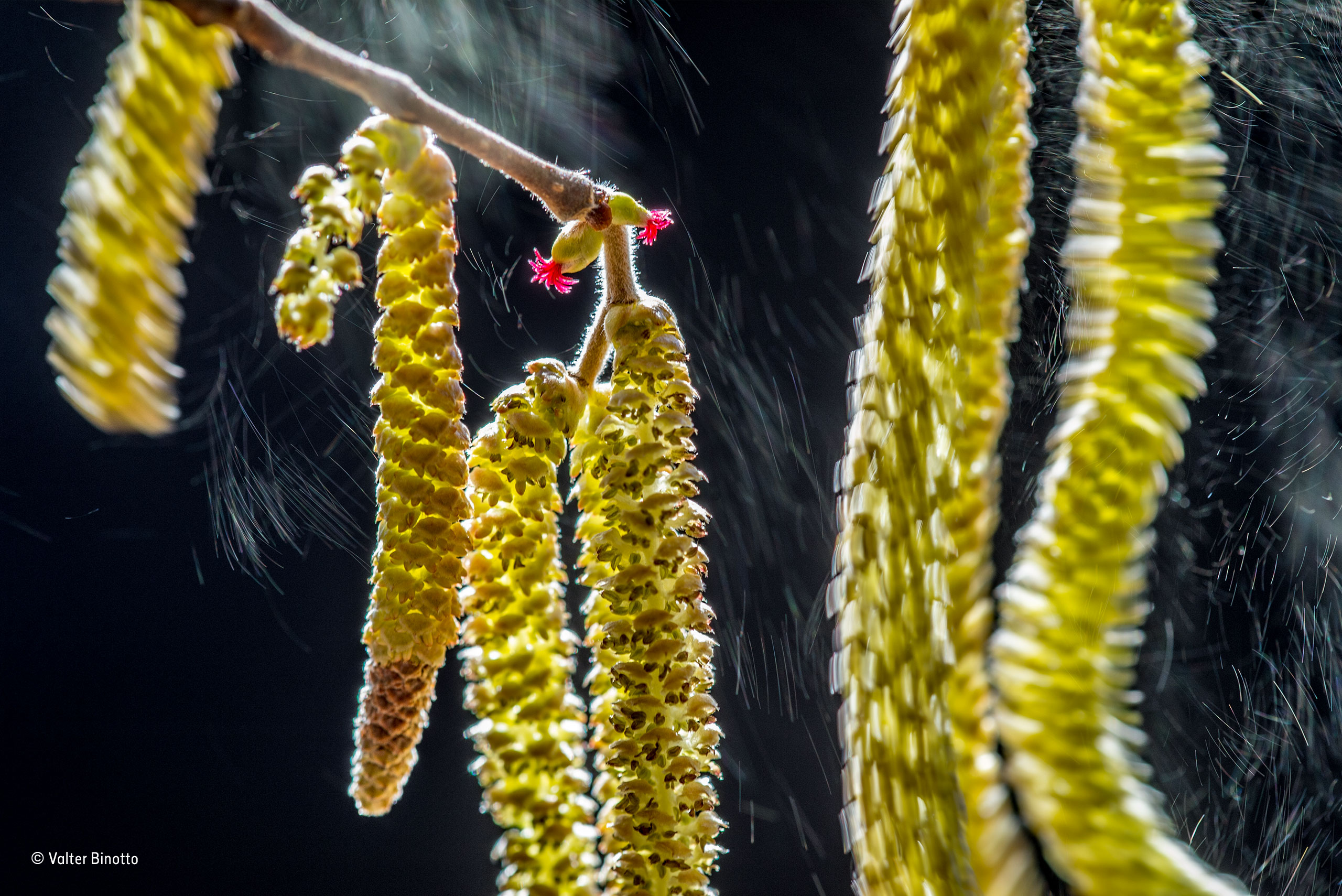 This gloriously detailed close-up of a hazel tree’s flowers showcases the incredible details of both the male and female flowers, the latter of which is a small bud-like structure with a red-tufted stigma. Each catkin, as these long structures are called, release vast amounts of pollen early in the year to be carried away by the wind, but new research suggest bees play an important role in pollen transfer too.

Credit: Valter Binotto, from India/Wildlife Photographer of the Year 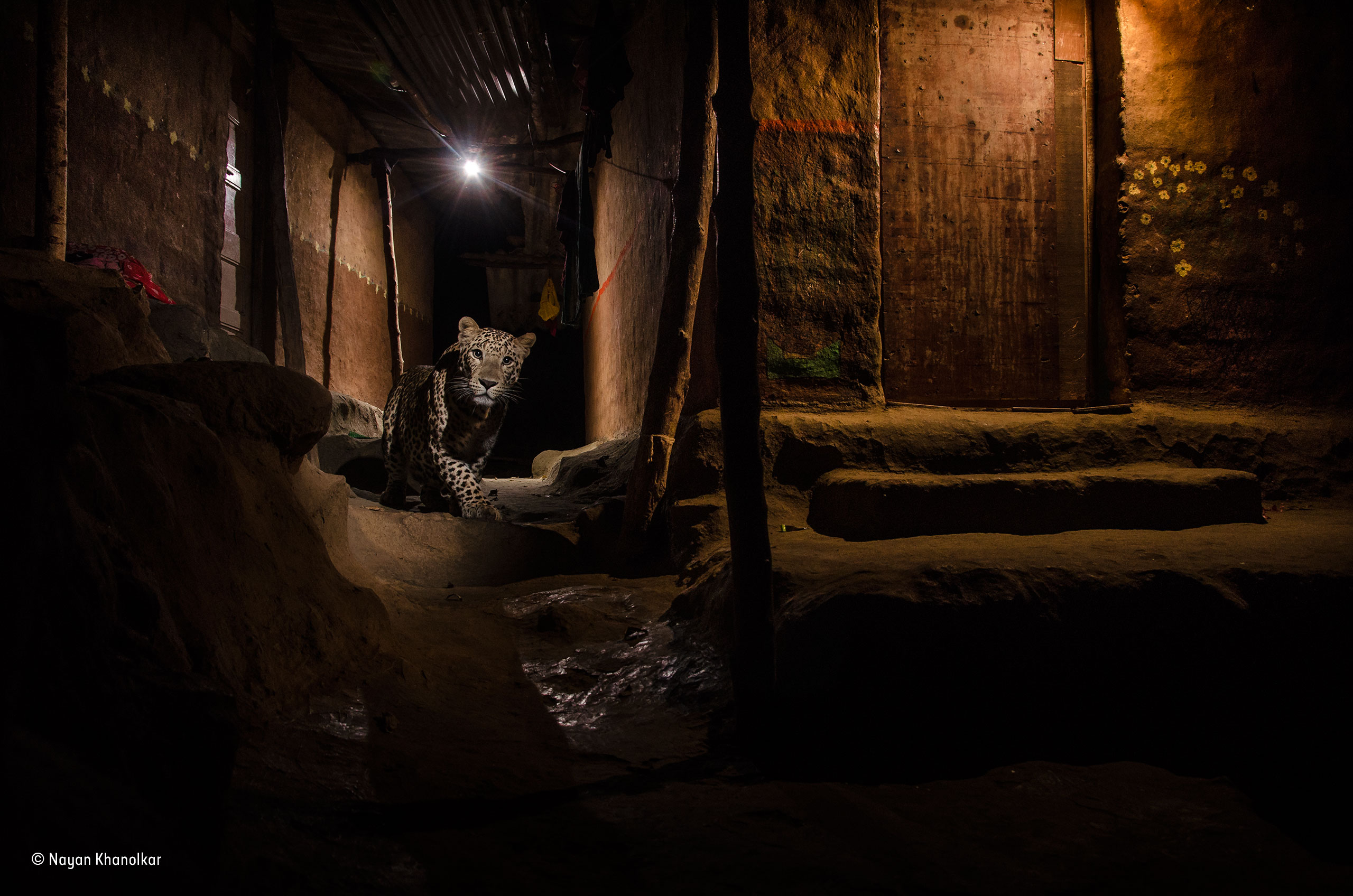 A leopard slips silently by in the alleyways of a suburb of Mumbai. Despite a few occasional attacks on humans, these cats are widely accepted as part of day-to-day life here, as they stalk the streets in search of food – mostly stray dogs.

Credit: Nayan Khanolkar, from India/Wildlife Photographer of the Year

6 – Requiem for an Owl (Winner, Black and White) 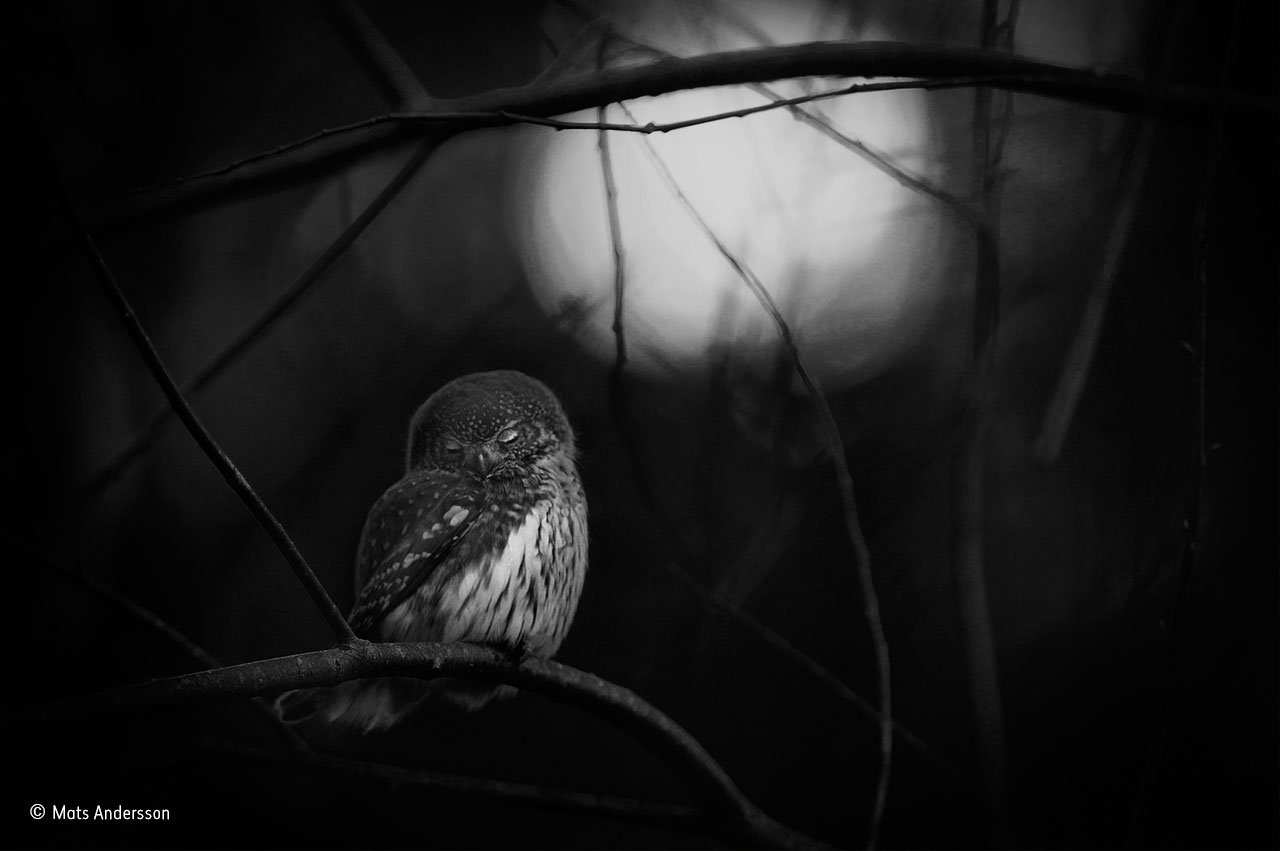 This photographer’s forest in Bashult, Southern Sweden was found to contain an adorable pairing of Eurasian pygmy owls, each of which was barely 19 centimeters (7.5 inches) tall. One night, he noticed that one was lying dead on the ground, with its companion looking on forlorn, lit by the first light of dawn.

Shortly after this photograph was taken, the surviving owl was killed too, likely by another larger bird not wishing to share its territory with others.

Credit: Mats Andersson, from Sweden/Wildlife Photographer of the Year 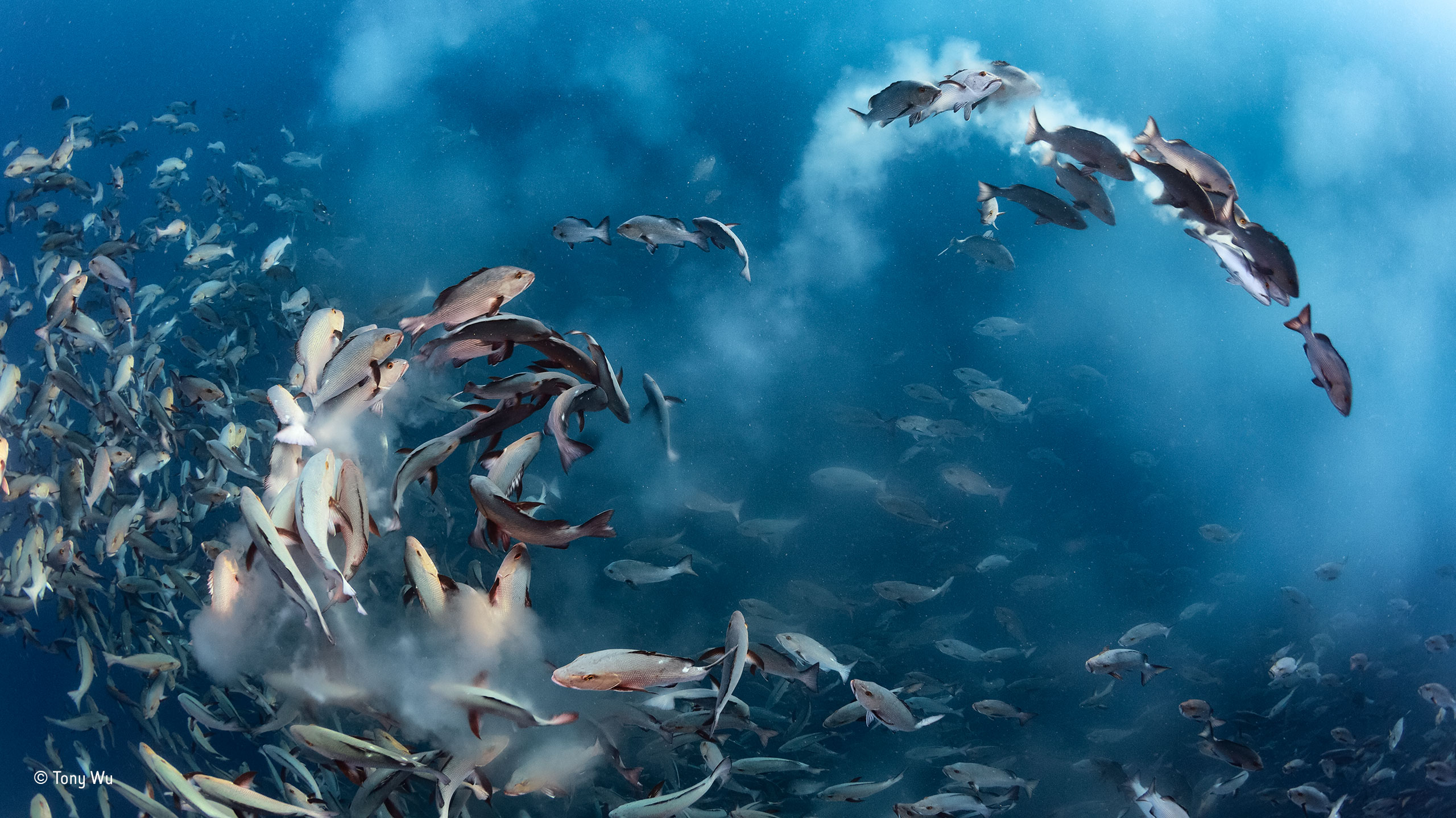 Thousands of two-spot red snappers gather to spawn around the Western Pacific isle of Palau for several days each month, in tandem with each full Moon. The maelstrom of mating is fast and furious, with predators also joining the fray and hoping to capture a tasty meal.

On one extremely lucky occasion, after many failed attempts, the photographer captured a dynamic arc of spawning fish amid clouds of eggs under the sinewy morning light.

Credit: Tony Wu, from USA/Wildlife Photographer of the Year 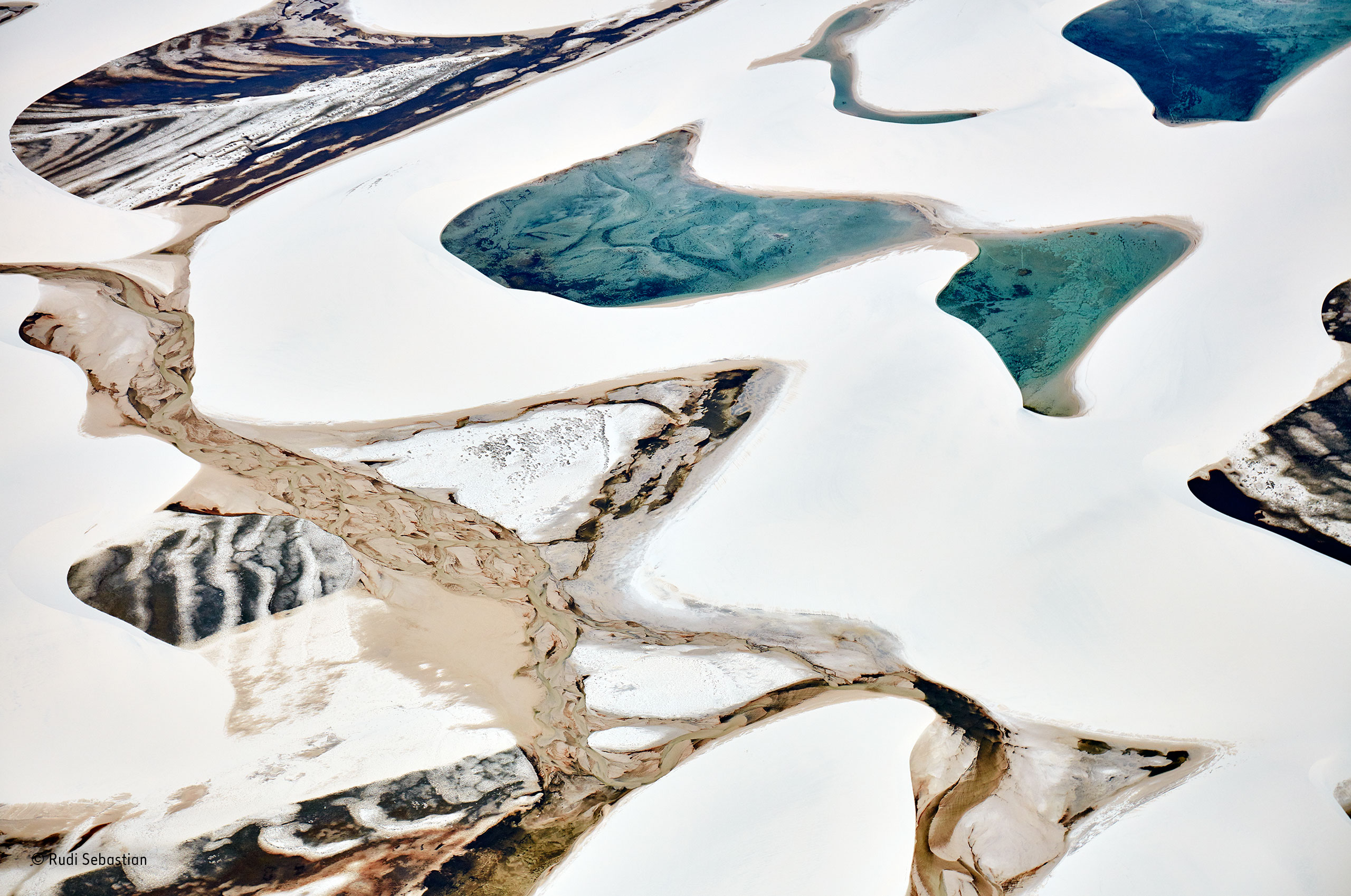 The white sand of Brazil’s Lençóis Maranhenses National Park acts like a blank canvas to the incoming rain, which sculpts out the most vibrant and ephemeral lagoons painted by colorful bacteria. Planning two years in advance for the perfect moment to shoot, this photographer flew over the incredible scene and, leaning outside, shot directly downwards.

Credit: Rudi Sebastian, from Germany/Wildlife Photographer of the Year 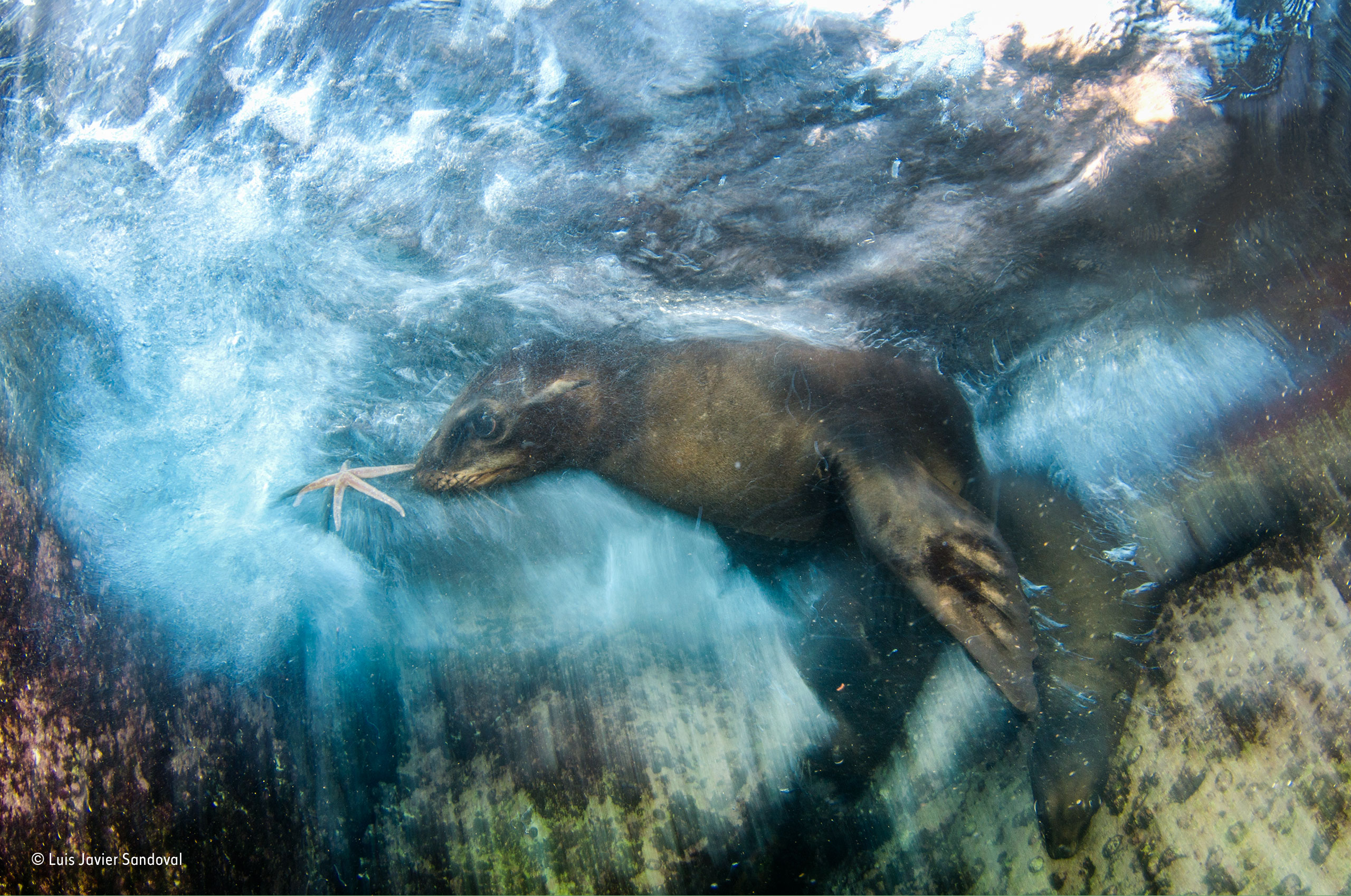 Curious young Californian sea lions come over to say "hi" in the waters off the island of Espíritu Santo. One of the pups grabbed a starfish and started using it as a frisbee, passing it back and forth, honing its hunting techniques.

Credit: Luis Sandoval, from Mexico/Wildlife Photographer of the Year 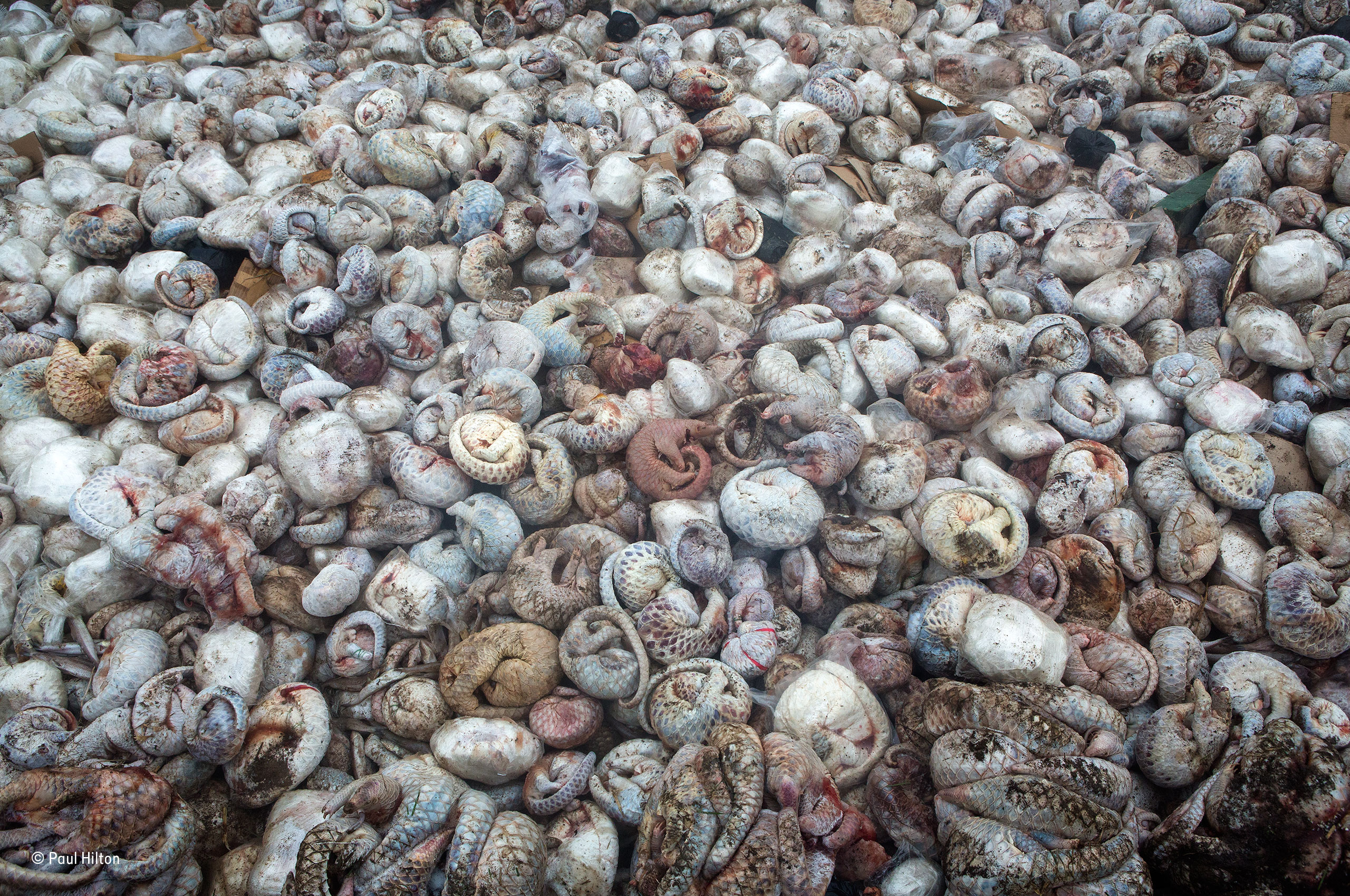 The horrifying scene of 4,000 defrosting pangolins – the world’s most trafficked mammal – shocked this particular photojournalist. These Sunda pangolins were on their way to China and Vietnam in order to be harvested for use in traditional medicine when a joint operation between the World Conservation Society and the Indonesian authorities seized them.

Found in a shipping container behind a layer of frozen fish, 96 live pangolins were also recovered, all of which were released back into their rainforest home. Pangolins were recently granted the most advanced level of protection by 182 nations, but as the photographer himself said, “Wildlife crime is big business” that will “stop only when the demand stops.”

Credit: Paul Hilton, from UK & Australia/Wildlife Photographer of the Year