For humans, injuries to the spinal cord are often fatal and, at the very least, paralyzing. Scientists have been working on many different approaches to help with these conditions, and they might have found an unlikely ally in the zebrafish.

This popular aquarium pet has the remarkable ability to regenerate its spinal cord following an injury, and scientists have discovered how. The international team of researchers led by Duke University in North Carolina discovered that 12 specific genes became particularly active following the injury.

Among these, they found that the level of connective tissue growth factor, or CTGF, rose in the glial cells – a set of supporting cells that form the bridge between severed ends in the first two weeks after injury. This finding was published in Science.

“We were surprised that it was expressed in only a fraction of glial cells after the injury," said lead author Mayssa Mokalled, a postdoctoral fellow at Duke University, in a statement. "We thought that these glial cells and this gene must be important.

When the scientists removed the CTGF from those cells, the fish failed to regenerate their spinal cord. The zebrafish would normally take about eight weeks to regenerate enough nerve cells to completely reverse their paralysis. 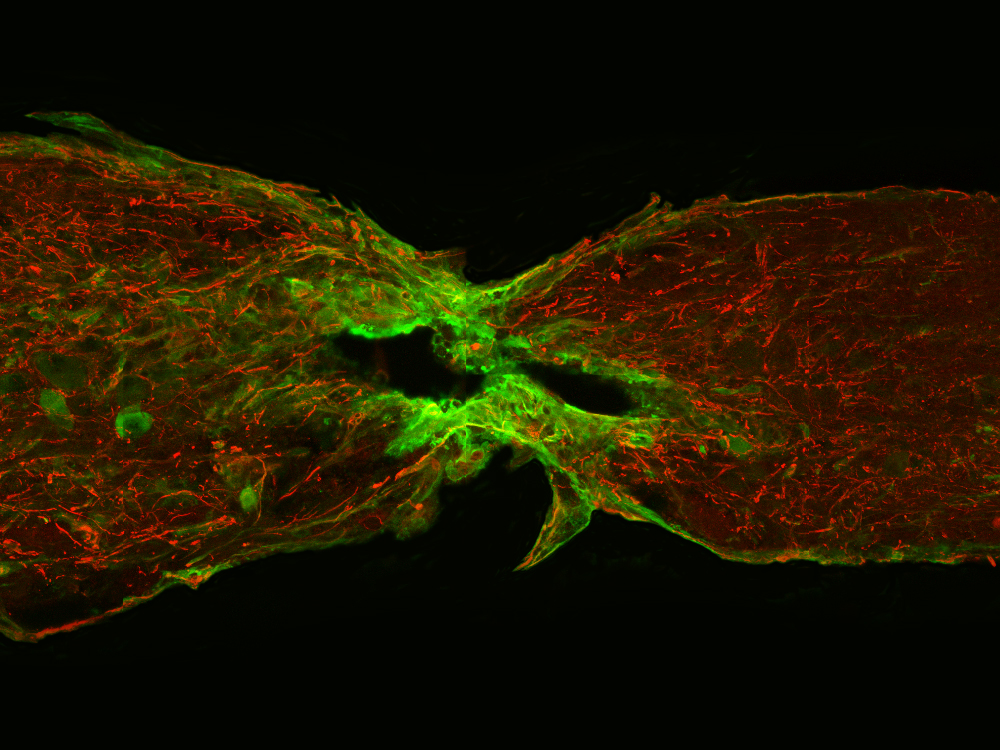 Severed tissue of a zebrafish spinal cord reforming. The fluorescent green proteins show where the CTGF gene is being activated. M. Mokalled and K. Poss

“This is one of nature’s most remarkable feats of regeneration,” said the study’s senior investigator Kenneth Poss, a professor of cell biology and director of the Regeneration Next initiative at Duke. “Given the limited number of successful therapies available today for repairing lost tissues, we need to look to animals like zebrafish for new clues about how to stimulate regeneration.”

Humans and zebrafish share a lot of the same protein-coding genes, including the CTGF. The human CTGF is 90 percent similar to the zebrafish one, and when the human CTGF was injected in the zebrafish, it made the regeneration four times faster.

Although this is a promising finding, it is a preliminary study. CTGF appears to be working with other proteins secreted by the glial cells.

“I don’t think CTGF is the complete answer, but it’s a great thing to have in hand to inform new ways to think about the real challenge of trying to improve regeneration,” Poss added.

The team will continue to study the zebrafish, but will also look at how the CTGF is used by mammals like mice. These might provide new clues on how to better employ CTGF.