Scientists have largely agreed that the war on drugs has been nothing short of a monumental failure, and while the catastrophic consequences of this irrational policy are felt by people of all colors and creeds, a new report reveals how US legislations are particularly damaging to the black community. Pulling together data from a huge number of studies, the researchers find that the nation’s approach to narcotics increases African Americans’ risk of contracting HIV.

Appearing in the International Journal of Drug Policy, the study introduces a model by which the virus is able to proliferate among African Americans via two main pathways: disproportionate incarceration of blacks for drug-related offenses and harsher sentences for blacks than whites.

These factors have been produced by laws like the Anti-Drug Abuse Act, which placed African American communities under extreme surveillance, as well as federal guidelines that instruct judges to hand out 18 times more prison sentences for offenses relating to crack cocaine – a drug commonly associated with black communities – than powder cocaine, which is more common among whites.

As a consequence, more than half of all blacks in US prisons are serving time for drug-related crimes, and the overall incarceration rate for narcotics offenses is more than 10 times higher for African Americans (256.2 per 100,000) than for whites (25.3 per 100,000) – despite the fact drug use and distribution rates are equal for both groups. 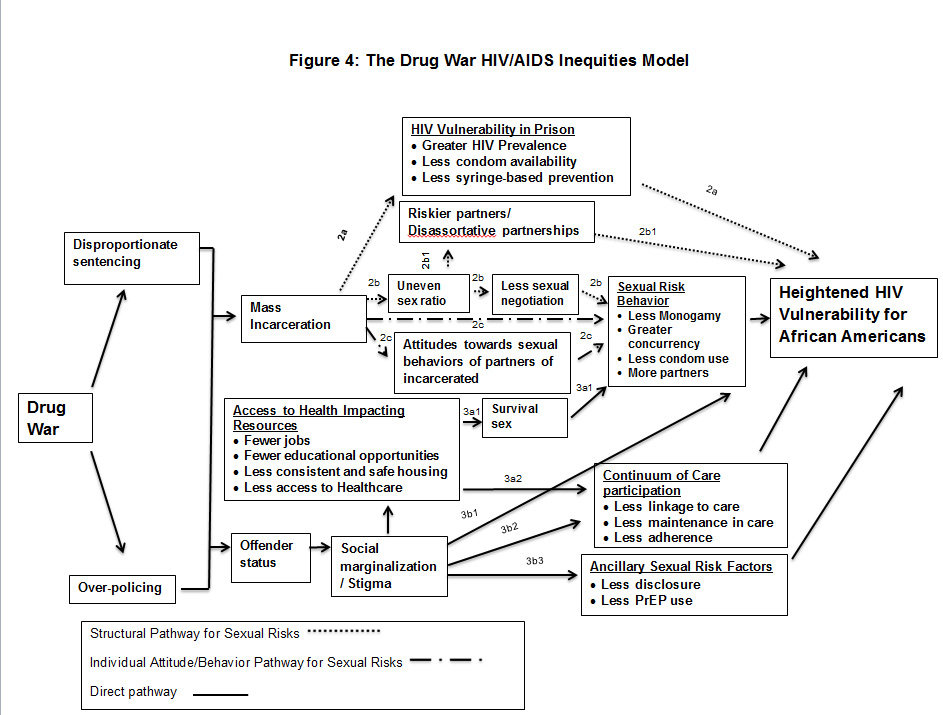 Increased incarceration and sentencing bias against blacks both contribute to the spread of HIV. International Journal of Drug Policy

Research shows that these higher incarceration rates encourage the spread of HIV among black prisoners, as a result of decreased access to clean needles and condoms. The wider African American community is also massively affected, as the astronomical number of incarcerated black males creates a huge gender imbalance. This disrupts marriages and romantic relationships, thereby destroying the protective effect of monogamy against the spread of sexually transmitted diseases.

The stigma of incarceration amplifies this effect, as many prisoners struggle to attain employment once they are released. As a result, they are unable to escape their poverty, and suffer from inferior education and healthcare, both of which are vital to stemming the spread of HIV.

A prison sentence thereby becomes a life sentence, as those labelled as criminals are forced to bear the social and economic consequences of their incarceration for the rest of their lives. This, say the study authors, massively increases their chances of contracting HIV via desperate behaviors like “survival sex”, whereby intercourse sometimes provides opportunities for financial gain.

The findings of this report will no doubt add further clout to the ever-more vociferous calls for politicians to implement evidence-based drug policies, doing away with the ideologically driven insanity of the war on drugs.