More than 300,000 years ago a 20-kilometer-long (12 miles) stretch of Australia's continental shelf collapsed, creating a tsunami estimated to have been 27 meters (93 feet) high. We can only imagine the long since eroded effects on the nearby coastline, but the underwater legacy can be seen in what looks like a gigantic version of one of Australia's most famous landmarks.

In the course of studying the continental shelf off what is now the Great Barrier Reef, marine geologists have seen evidence that great chunks of the outermost parts of the shelf have sometimes given way, producing tsunamis with the potential to wreck havoc on unprotected coastlines.

Two years ago, one such study revealed evidence of seven such collapses close together that would have produced waves 2-3 meters (7-10 feet) high between 14,000 and 20,000 years ago. The most recent finding has put that to shame, with an event that would have been 10 times as high.

The date of the most recent collapse is unknown. However, it must have been at least 302,000 years ago, since corals that old have been found atop the debris left behind. 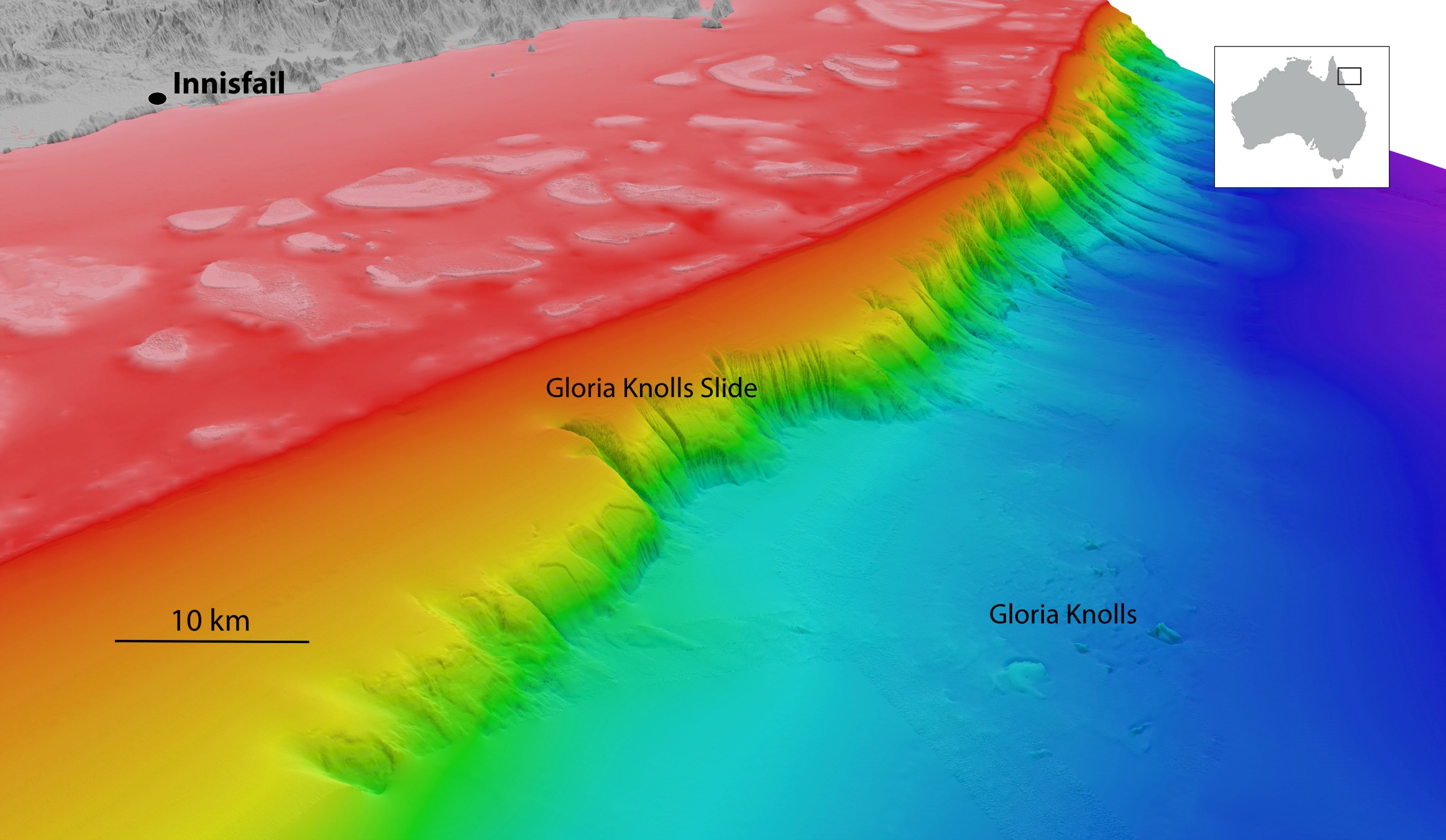 The fact that the Knolls are so far away from the cliff face demonstrates that the collapse was sudden and catastrophic. Colors represent ocean depth. deepreef.org.au

Dr Jody Webster of the University of Sydney compared the discovery to a detective story in a statement. While studying the sea floor at a depth of 1,350 meters (4,450 feet) Webster and colleagues noticed eight bumps they called the Gloria knolls up to 100 meters (330 feet) high, and 70 smaller mounds on an otherwise flat area. In Marine Geology they describe the origins of the material back to a cliff that looks remarkably like the continent's iconic Uluru.

The scale of the bite taken from the cliffs indicates 32 cubic kilometers (8 cubic miles) of continental shelf collapsed. Dr Rob Beaman of James Cook University told IFLScience the fact that some knolls were 30 kilometers (20 miles) from the cliff edge demonstrates it all came down in one big collapse. The event would have been one of the largest known, but a small fraction of the known record, when as much as 30 times the material collapsed off Norway.

Underwater landslides can be lethal, but the research team considers a repetition of an event like this unlikely in the near future. Should it occur, the damage would be enormous. Studies on smaller waves indicated that the Great Barrier Reef dampens tsunamis by around 50 percent – enough to pull the teeth from previous discoveries, but of limited comfort with something this size.

Beaman told IFLScience the layers of mud and sand on the margins of the Great Barrier Reef allow surfaces to slide easily, but they would still need a large initial trigger, which at such depths almost certainly has to have been an earthquake.