There are two colossal blobs the size of entire continents hiding deep within Earth’s mantle, and researchers are almost completely baffled as to what they are or where they came from. According to the authors of a new review study in Nature Geoscience, they could one day pose a great threat to us in the form of a terrifying volcanic eruption.

These blobs, known technically as “thermochemical piles”, are each so voluminous that, according to LiveScience, over 100 Mount Everests would fit inside each one, and together they make up 3 percent of Earth's volume. One is hiding beneath Africa, whereas the other resides under the Pacific Ocean. They don’t appear to be moving up from the 2,880-kilometer-deep (1,800 miles) boundary between the partly-molten, partly-solid mantle and the liquid outer core, but that doesn’t mean that they won’t suddenly move in the future.

In fact, the ongoing break-up and sinking of tectonic plates “can continuously add to existing thermochemical piles,” the authors note. So not only are they huge, but there’s a chance they’re hungry – consuming more tectonic plates and growing in size.

This means that scientists can tell what parts of the mantle – the mobile mush that makes up 84 percent of the volume of Earth – contain fragmented tectonic plates, and which feature upwellings of superheated, far less solid plumes. Inferences about the age of the rocks, the speed in which they are churning around, and even their chemical compositions can also be gained from seismic waves.

A key finding from decades of geophysical research is that the mantle is quite a chaotic place, and these blobs are additional proof of this. But what on Earth could they possibly be?

There’s very little known about the home of the blobs – the core-mantle boundary (CMB) – but it’s likely that this thermal crypt is often the final resting place of large segments of snapped off tectonic plates that have slipped underneath less dense tectonic plates in a process known as subduction. If a tectonic plate fragment impacts the CMB, it might push vast amounts of molten material up to the surface as a plume.

Alternatively, it might just stay down there and slowly decompose and dissolve. As the authors of the study suggest, it is possible that this second scenario is what created the gigantic blobs.

If, however, they did begin to rise, the implications are troubling. Their vast size suggests that they could each form a “superplume”, one that would breach the crust and create massive eruptions that would last for millions upon millions of years – and not a single geophysicist on Earth knows when this process may begin to happen. 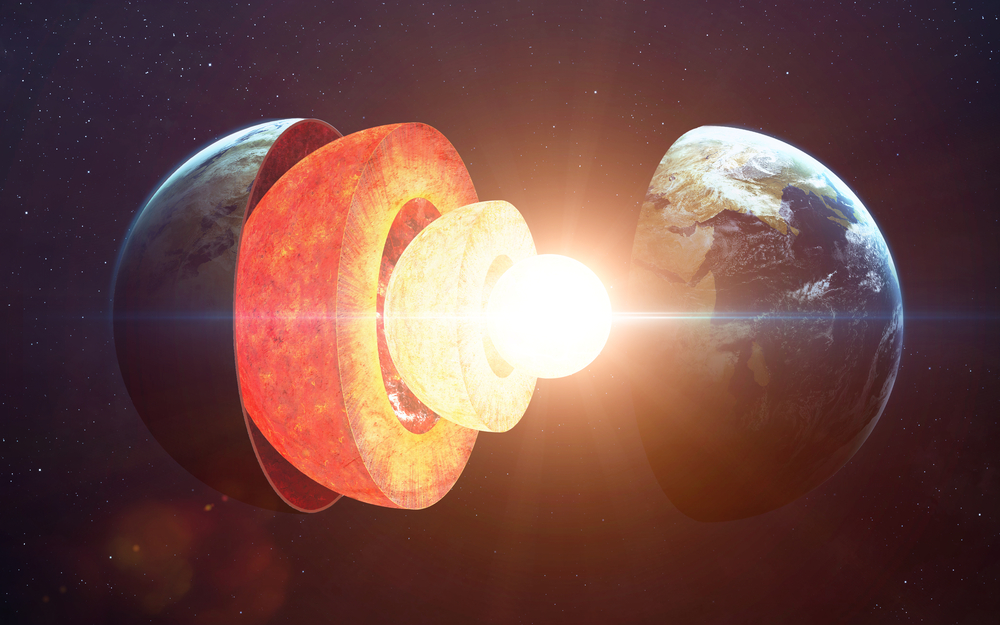 You could argue that the mantle, the large red-colored layer depicted here, is more mysterious to scientists than deep space. Vadim Sadovski/Shutterstock