The Amazon rainforest is 5.5 million square kilometers (2.12 million square miles) in size, so it’s understandable that there’s so much hiding within its foresty walls that we have yet to discover. Just recently, an unusual type of reef was found concealed at the mouth of the Amazon river, much to the surprise and delight of biologists.

Now, a strange, novel partnership between two humble creatures has been found within the darkest depths of the rainforest. Writing in the Journal of the Lepidopterists’ Society, the two researchers claiming credit for this discovery note that this is the first documented case of adult butterflies coexisting with ants.

Many butterfly species are known to have a symbiotic relationship between their caterpillars and their ants, with the former using a series of biochemical drugs to turn the latter into “zombie bodyguards,” in order to stop opportunistic predators like spiders gobbling them up. The ants get to feast on floral sugar droplets in return, but the caterpillar definitely has far more control in this somewhat abusive relationship. 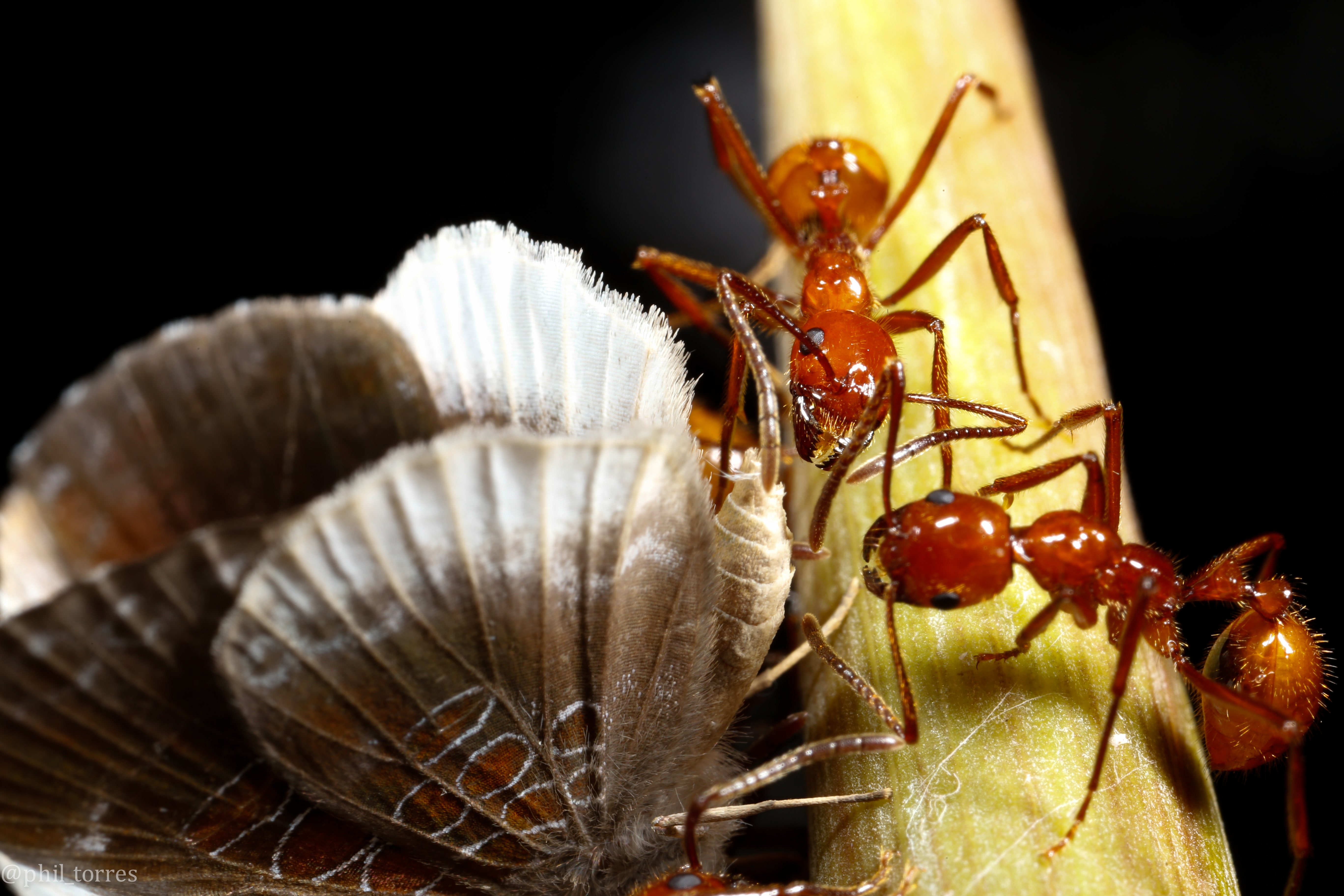 That's right. Do my bidding, my crimson minions. Phil Torres

This new study points out that this particular tropical butterfly makes its relationship with its co-opted ants even more one-sided. Not only are the ants used as bodyguards to protect the flying, flapping insect from predators, but they actually seem to get nothing at all out of it, except for the constant threat of being eaten. These butterflies are effectively their forceful overlords.

“When they are caterpillars, the relationship with ants is somewhat mutual,” Aaron Pomerantz, an integrative biologist at the University of Florida and one of the study’s co-authors, told IFLScience. “However, we found that the adult butterflies don't appear to give the ants anything in return and even steal [their sugar droplets].”

This type of behavior is known as “kleptoparasitism,” which literally means thieving parasite. Remarkably, this means that whether it’s a larvae or a fully-grown winged beast, the butterfly Adelotypa annulifera is able to force any ant it wishes into a life of submission.

As observed in other species, this butterfly is able to use specialized organs to produce both nutritional resources for the ants, as well as semiochemicals – chemicals that the ants receive as “command messages.” These Machiavellian marvels are also known to be able to acoustically communicate with the ants, effectively meaning that they have several ways in which they can literally brainwash them into doing their bidding. 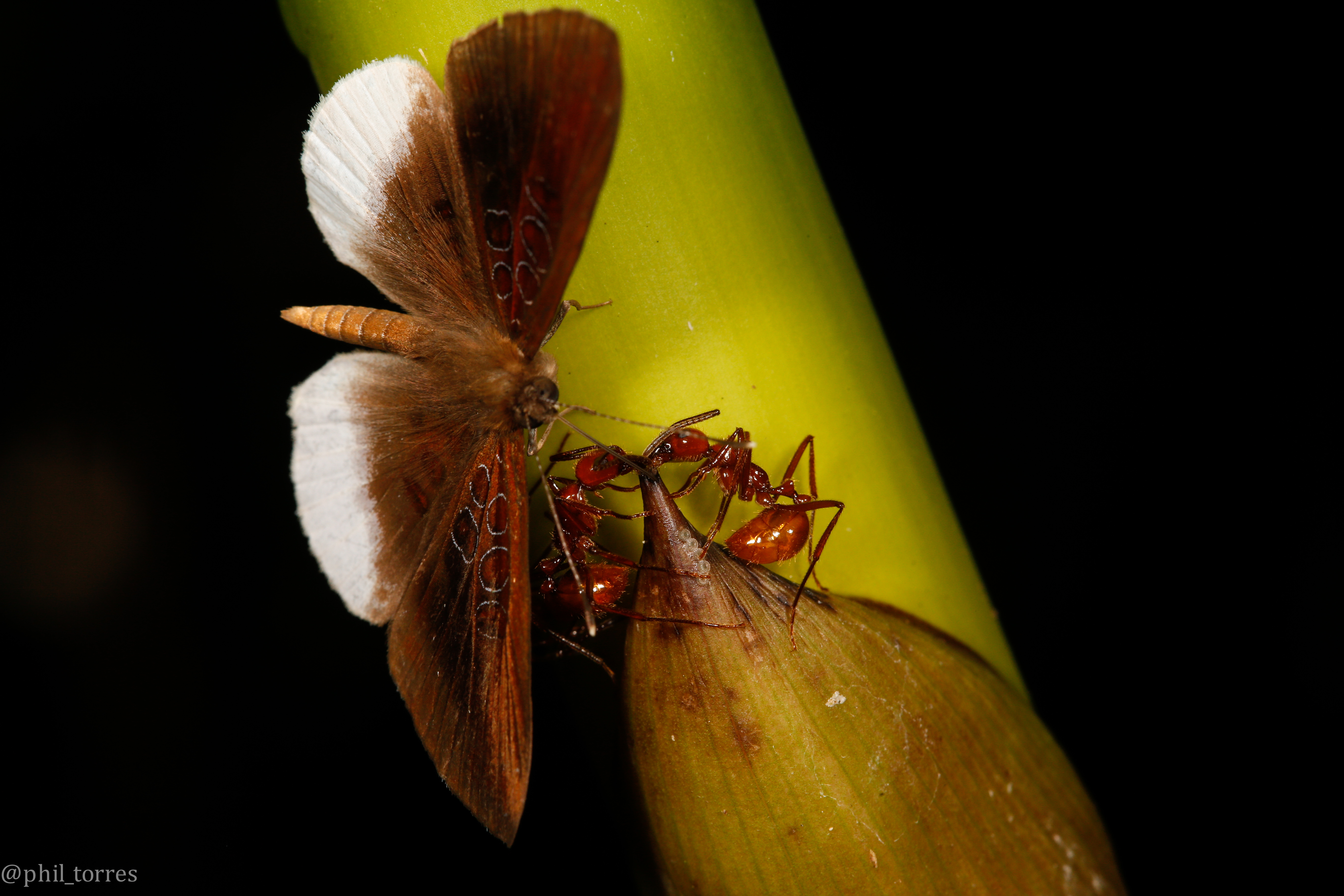 This butterfly often steals nutritious sap from the ants, who can be seen here feeding from the bamboo reservoir. Phil Torres

Incredibly, this isn’t the only trick that A. annulifera has up its sleeve: The red markings on its wings look a lot like the body shape of the red ants they typically associate with. This makes it the first butterfly known to science with the shape of a completely different insect in its wings, and the researchers think that it’s another predator prevention strategy.

“The idea is: if a butterfly looks like red ants (which bite and sting) then a predator such as a bird may be less likely to attack it,” Pomerantz added. This butterfly, then is the only known example of one that co-exists, mimics, and steals from ants. What a clever, conniving little mischief-maker.

Co-author Phil Torres, a conservation biologist at Rice University, along with Aaron Pomerantz, explains the new discovery. The Jungle Diaries via YouTube