A Cretaceous dinosaur fossil so well preserved we can determine its skin coloring has led to the most realistic reconstruction yet of one of these extinct beasts. It has also given us insight into the environment in which this particular species lived.

When he was a graduate student, Dr Jakob Vinther, now of the University of Bristol, realized that structures on the skins of exceptionally preserved fossils once carried melanin pigments. Earlier this year this idea was used to reconstruct the colors of a 10-million-year-old snake.

Vinther is even more ambitious, tackling a species that has not only been dead for over 120 million years, but lacks modern relatives filling similar ecological niches. In Current Biology, he has reported on pigment-containing “melanosomes” on the skin of a remarkably preserved Psittacosaurus held in Frankfurt's Sekenberg Museum of Natural History. 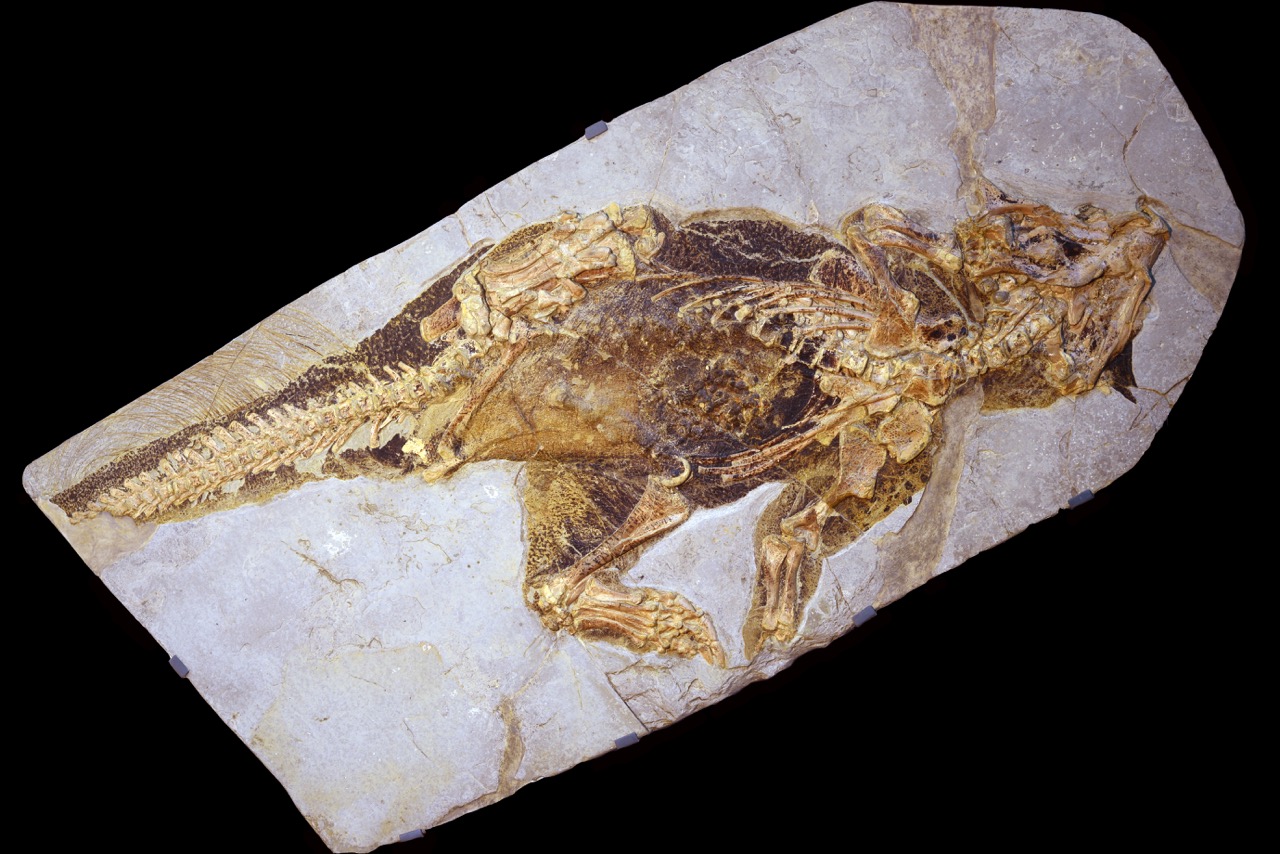 The Psittacosaurus's skin contains more melanosomes, which indicates a darker color, on top than below. This is a common pattern in animals today – think orcas or penguins when horizontal – for the camouflage it provides. The combination works because sunlight comes from above, making evenly colored objects brighter on top. By reversing this, animals confuse the eyes of predators or prey.

Not all countershading is the same, however. Where sunlight is mostly direct, the most effective form shifts sharply from dark to light – like those orcas again – but diffused light favors a more gradual transition. 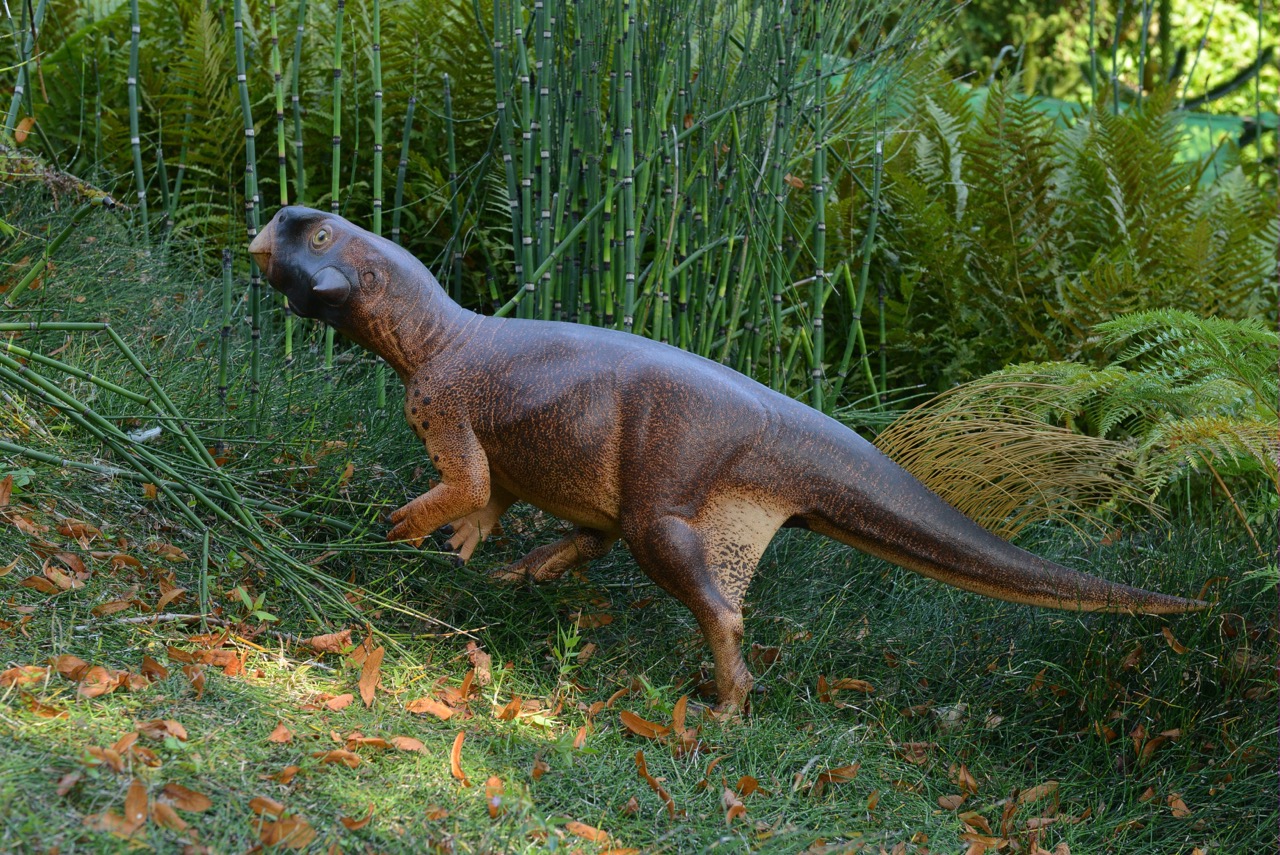 A model of Psittacosaurus in its native habitat. Robert Nicholls

The Psittacosaurus's preservation is the product of calcium phosphate absorbed into its skin from surrounding rocks after death. Vinther lit up the fluorescent calcium phosphate with a laser to reveal the color patterns.

Some parts survived better than others, so mapping the colors became a matter of filling in the gaps. As the images show, the coloring was complex, with the chest darker than the underbelly or tail. It is thought the camouflage served to evade large theropod predators.

“By reconstructing a life-size 3D model, we were able to not only see how the patterns of shading changed over the body, but also that it matched the sort of camouflage which would work best in a forested environment,” said co-author Professor Innes Cuthill in a statement. The prediction was confirmed by placing the 3D model of Psittacosaurus among some plant survivors from the Cretaceous to learn where it was least visible. 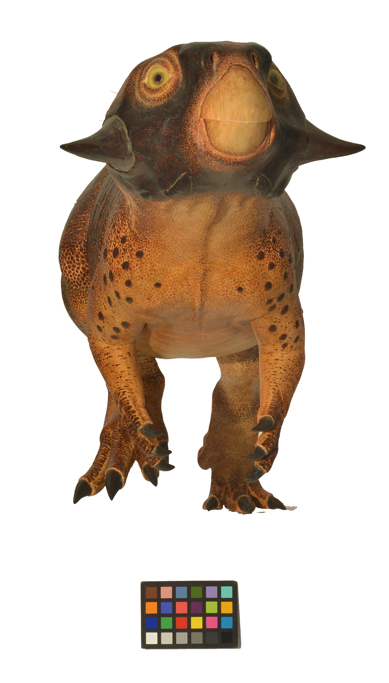 Psittacosaurus from the front. Robert Nicholls

The heavily pigmented face has yet to be explained, but the dark coloring around the cloaca (used for both reproduction and defecation) is thought to be a product of melanin's anti-microbial properties.

Although Psittacosaurus had scales, it has been found in early Cretaceous deposits from China that often contain feathered dinosaurs.

The nine known species of Psittacosaurus aren't among the more famous dinosaurs, but with more than 400 known specimens they're a well-studied genera and are suspected to have been relatively intelligent. Although related to the ever-popular Triceratops, the connection was not close enough for the latest research to tell us much about the three-horned dinosaur's lifestyle.