The winners were announced in October with Dutch photographer Marsel van Oosten scooping the top spot for his shot of a pair of golden snub-nosed monkeys (“The Golden Couple”) gazing wistfully into the distance.

But now it is time for the people to have their say. Online voting for the LUMIX People’s Choice Award opened Tuesday and will stay open until February 5, 2019.

The public can vote for one of 25 finalist images chosen from more than 45,000 submissions from 95 countries. The winner will get its moment to hang in the exhibition alongside the 100 images already picked by judges and the top five will also be displayed online.

Here are a few of our favorites along with their captions from the competition. 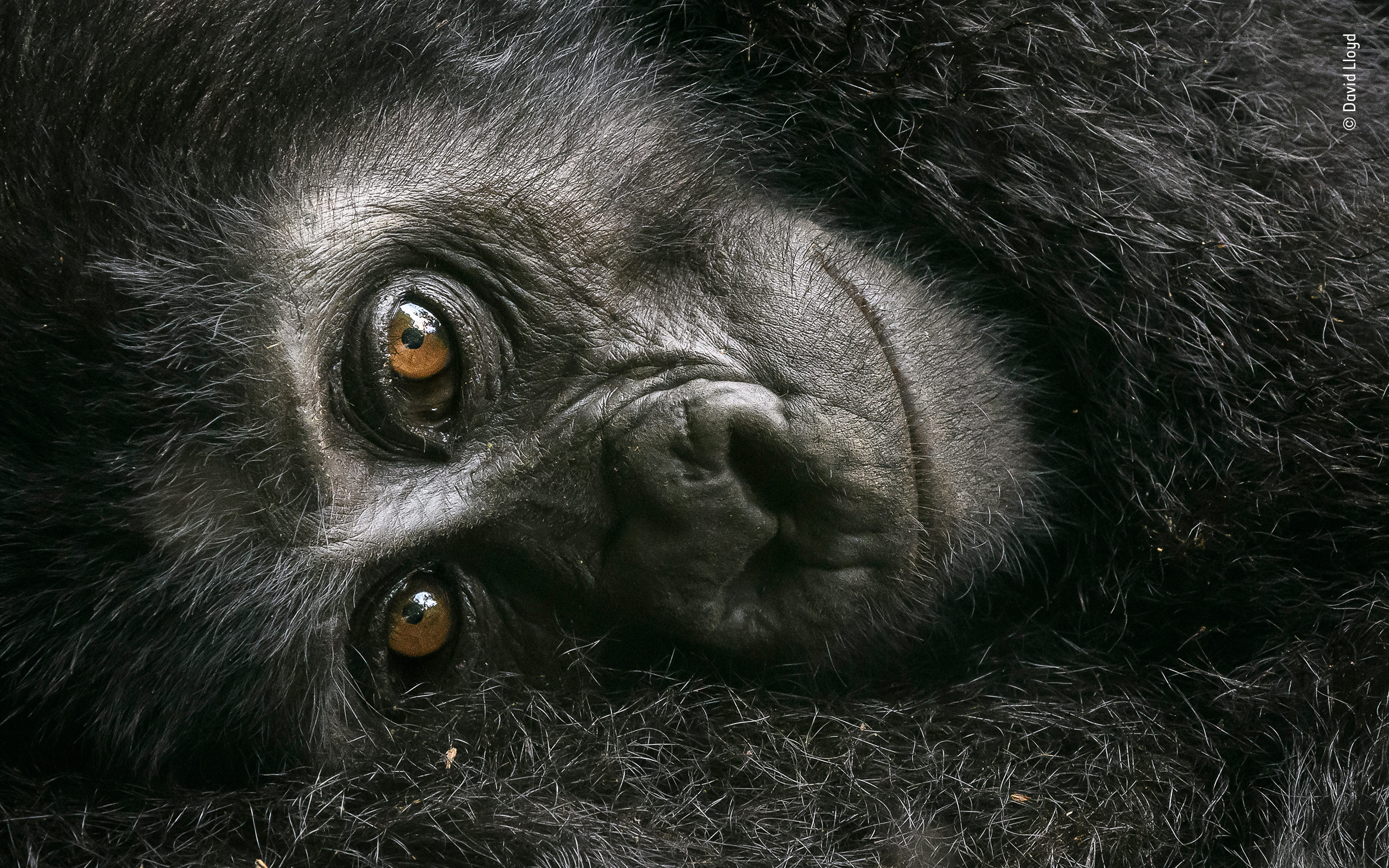 The baby gorilla clung to its mother whilst keeping a curious eye on David. He had been trekking in South Bwindi, Uganda, when he came across the whole family. Following them, they then stopped in a small clearing to relax and groom each other.

"Under the Snow" by Audren Morel (France) 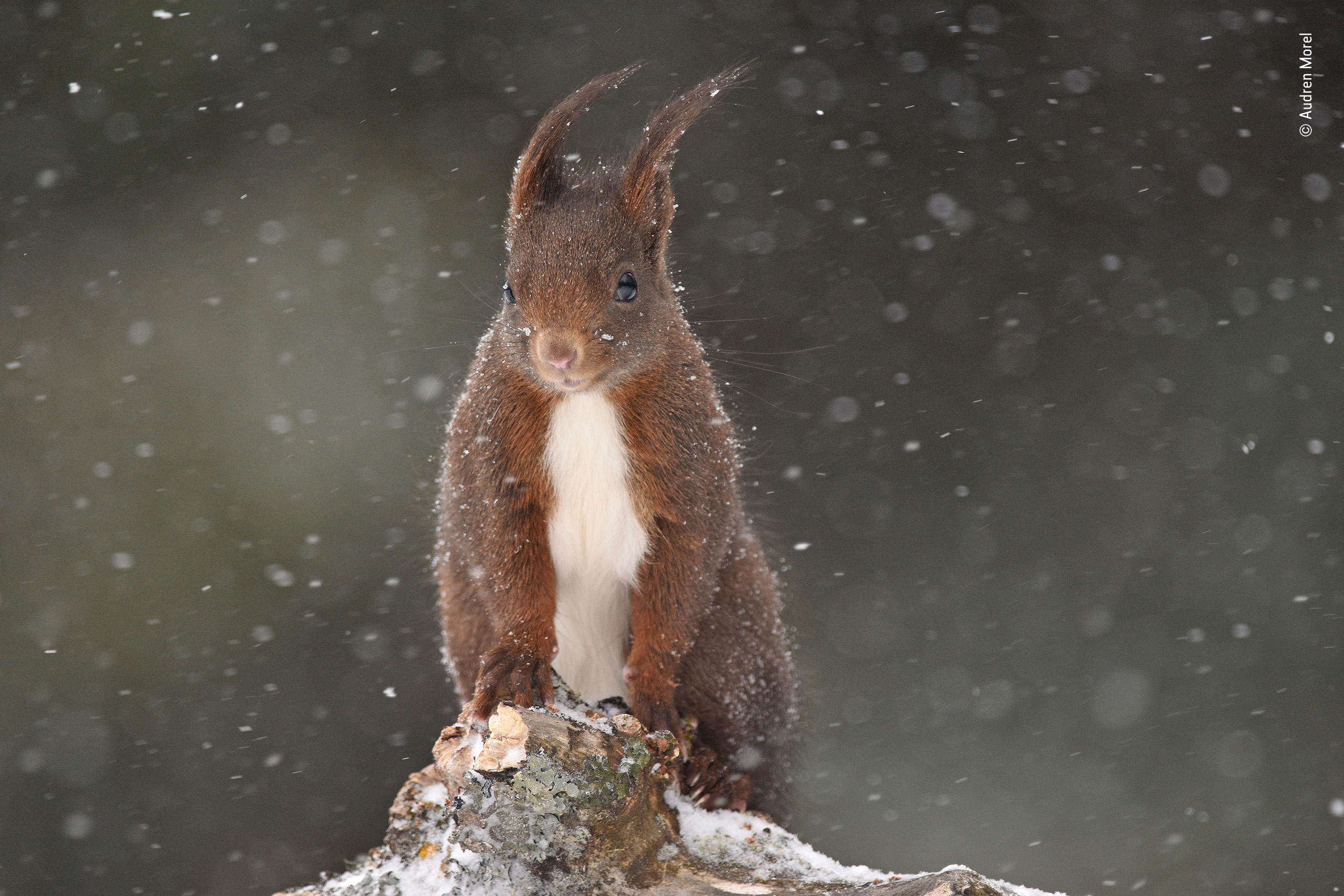 Unafraid of the snowy blizzard, this squirrel came to visit Audren as he was taking photographs of birds in the small Jura village of Les Fourgs, France. Impressed by the squirrel’s endurance, he made it the subject of the shoot. 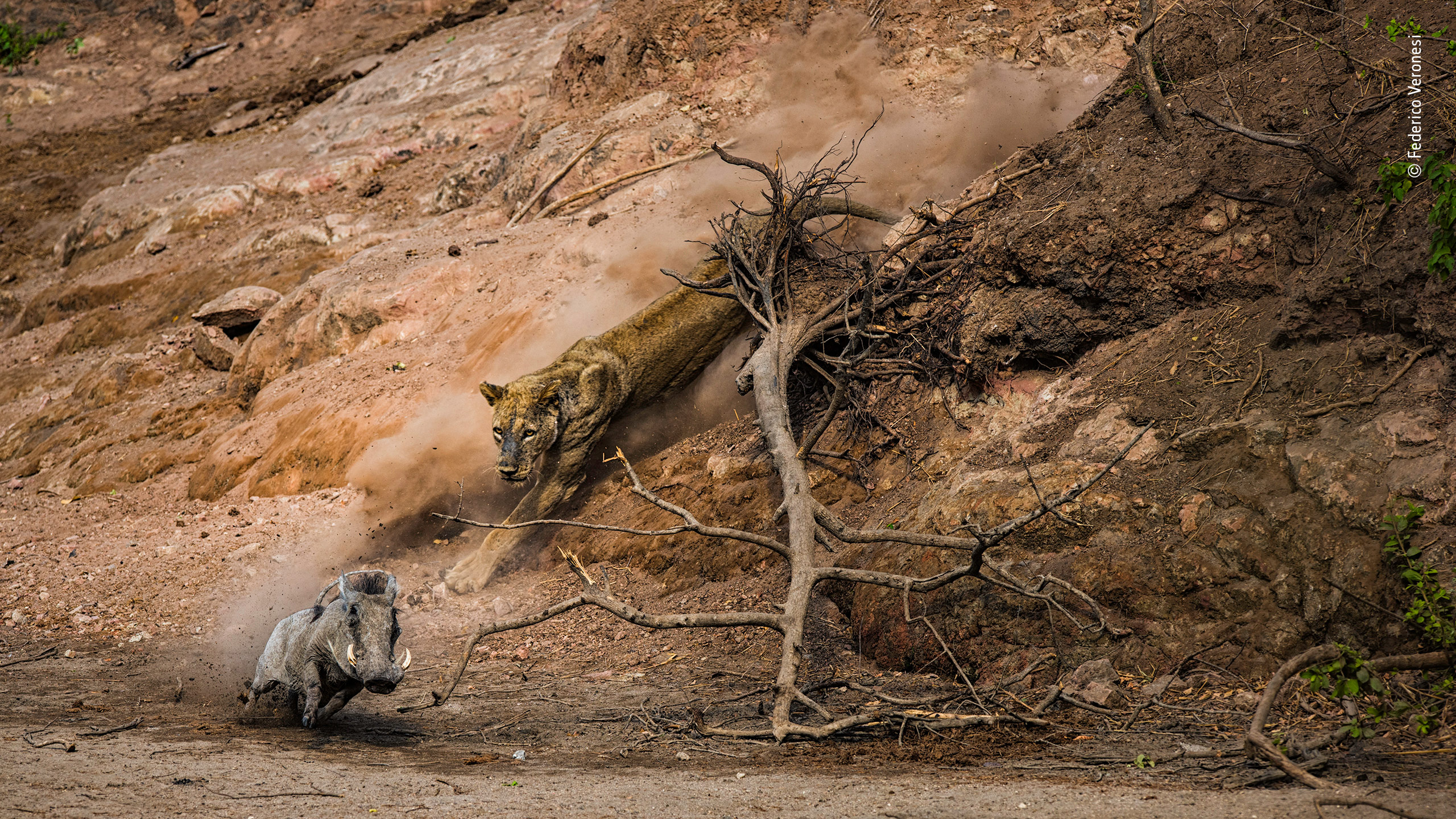 On a hot morning at the Chitake Springs, in Mana Pools National Park, Zimbabwe, Federico watched as an old lioness descended from the top of the riverbank. She’d been lying in wait to ambush any passing animals visiting a nearby waterhole further along the riverbed. 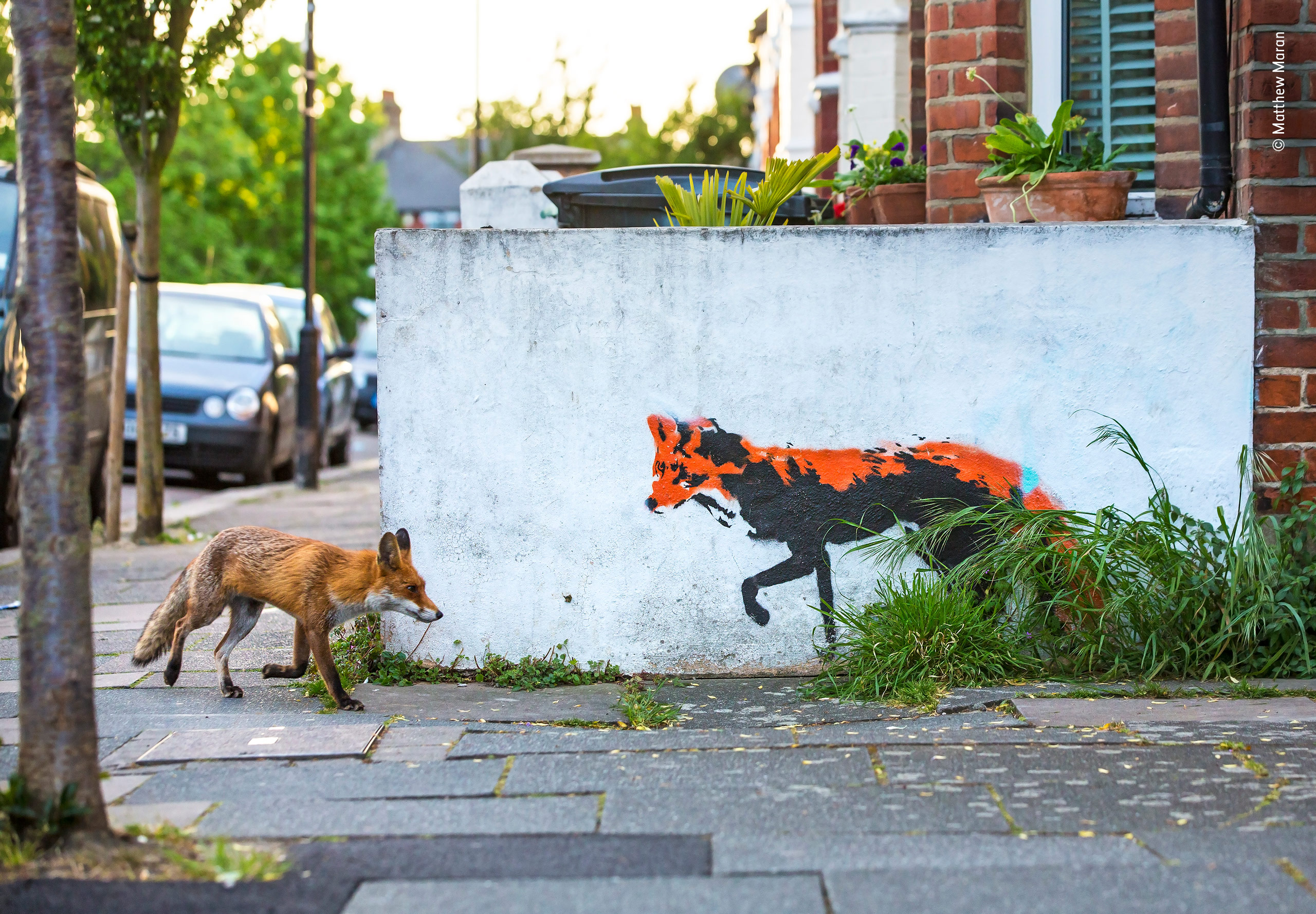 Matthew has been photographing foxes close to his home in north London for over a year and ever since spotting this street art had dreamt of capturing this image. After countless hours and many failed attempts, his persistence paid off. 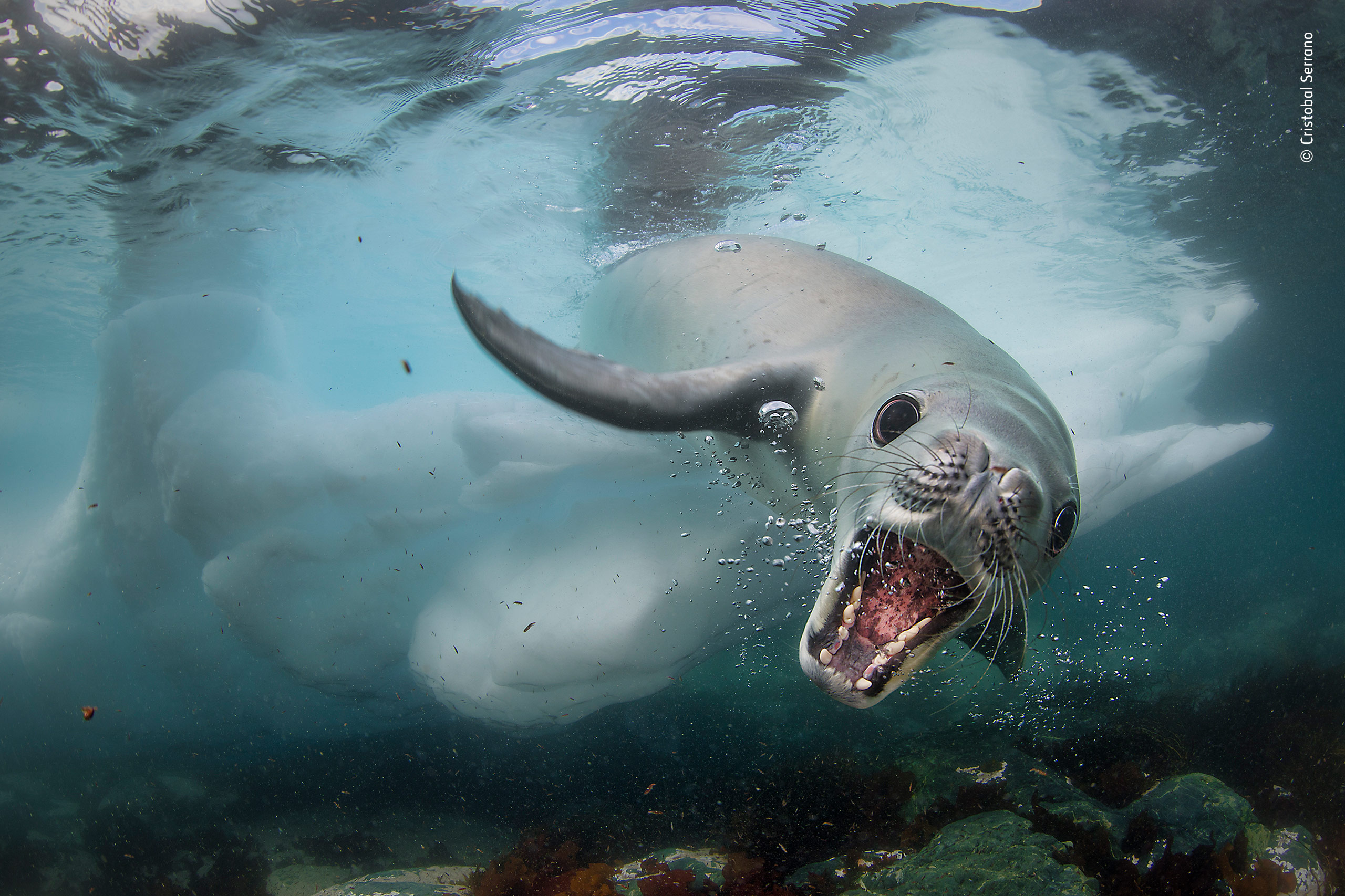 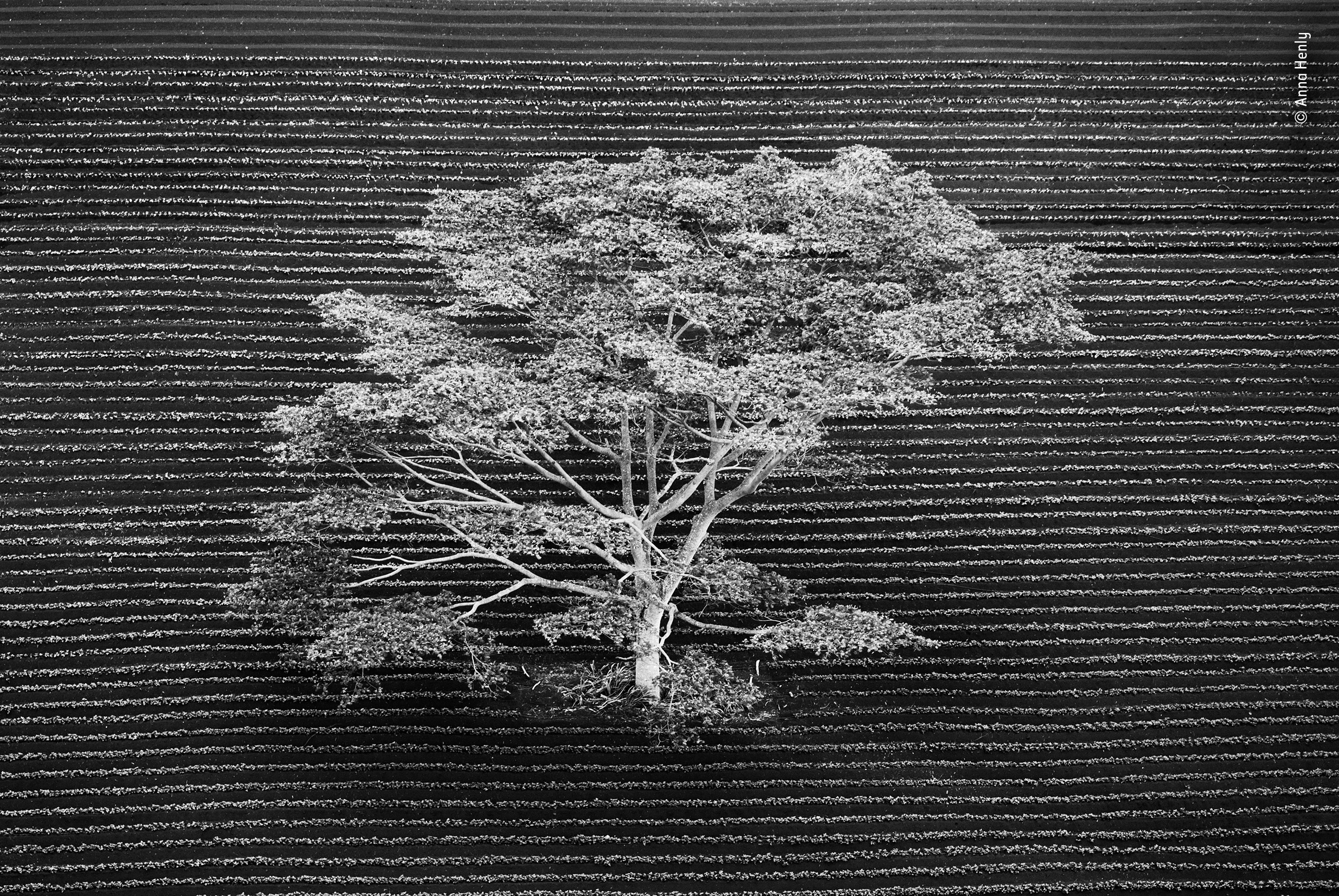 Snapped from a helicopter, this isolated tree stands in a cultivated field on the edge of a tropical forest on Kauai, Hawaii. The manmade straight lines of the plowed furrows are interrupted beautifully by nature’s more unruly wild pattern of tree branches.

"A Polar Bear's Struggle" by Justin Hofman (US) 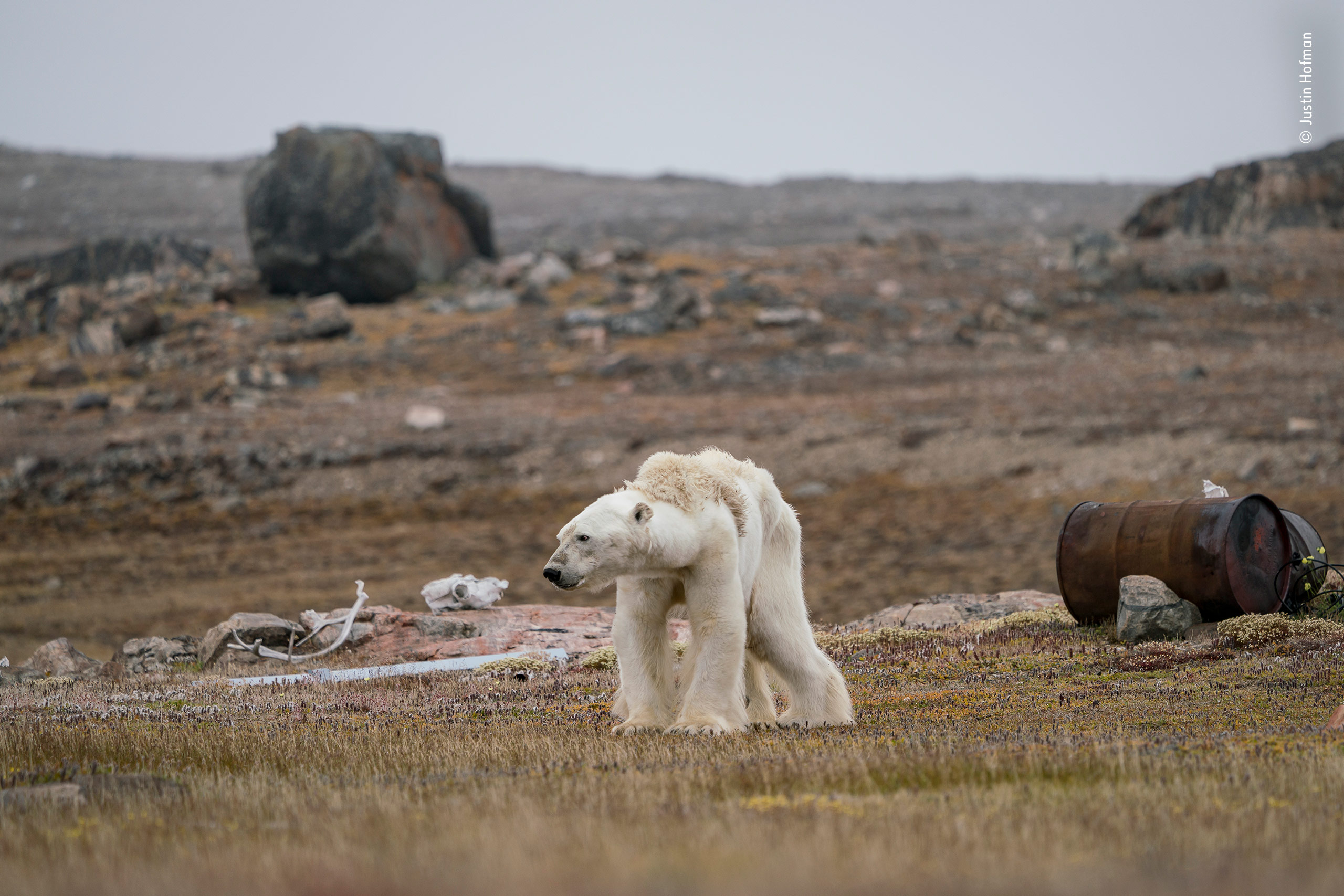 Justin’s whole body pained as he watched this starving polar bear at an abandoned hunter's camp in the Canadian Arctic slowly heave itself up to standing. With little, and thinning, ice to move around on, the bear is unable to search for food.

(Justin became a finalist in last year's competition with his striking – but heartbreaking – shot of a seahorse hitching a ride on a discarded Q-tip.) 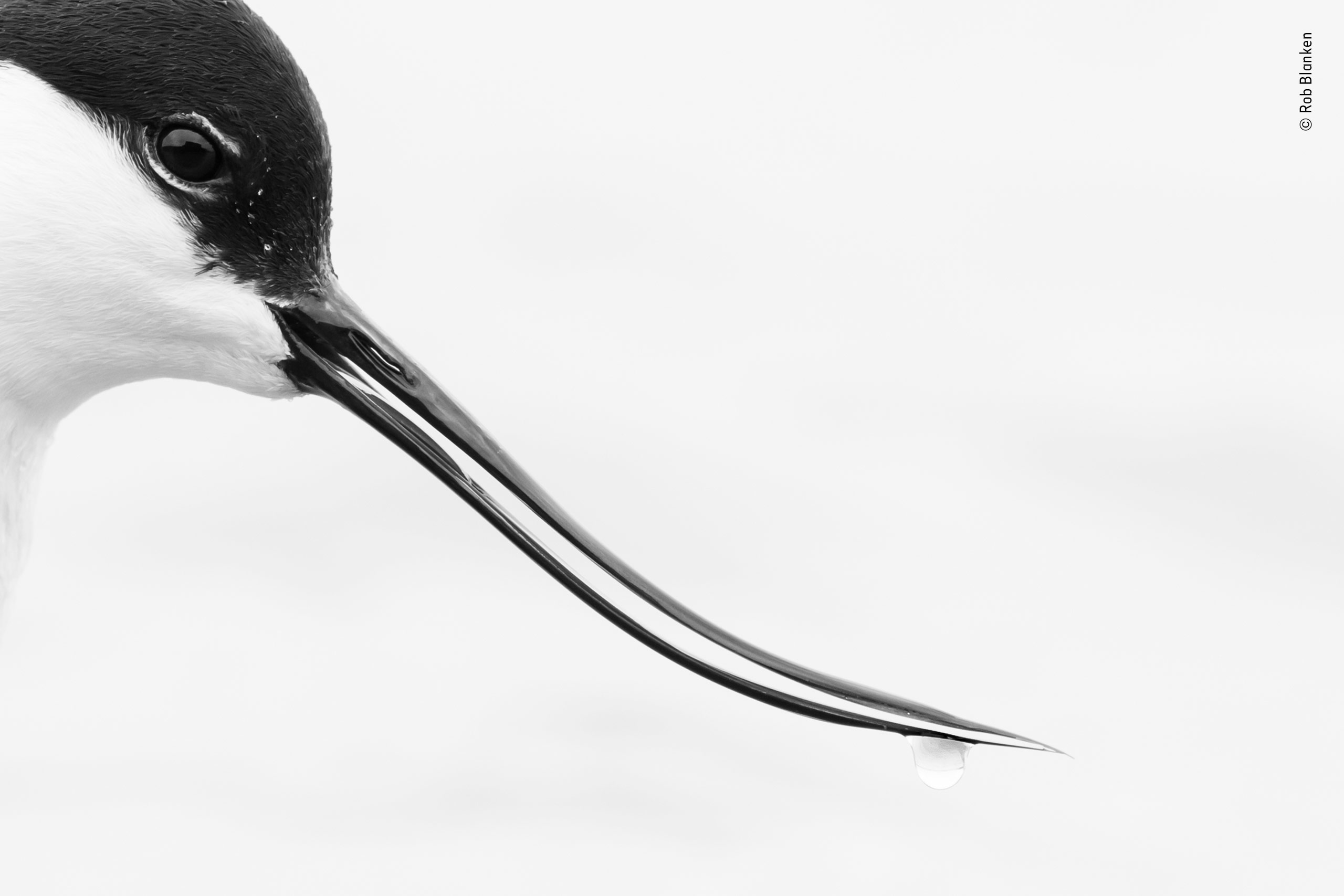 The pied avocet has a unique and delicate bill, which it sweeps like a scythe, as it sifts for food in shallow brackish water. This stunning portrait was taken from a hide in the northern province of Friesland in The Netherlands. 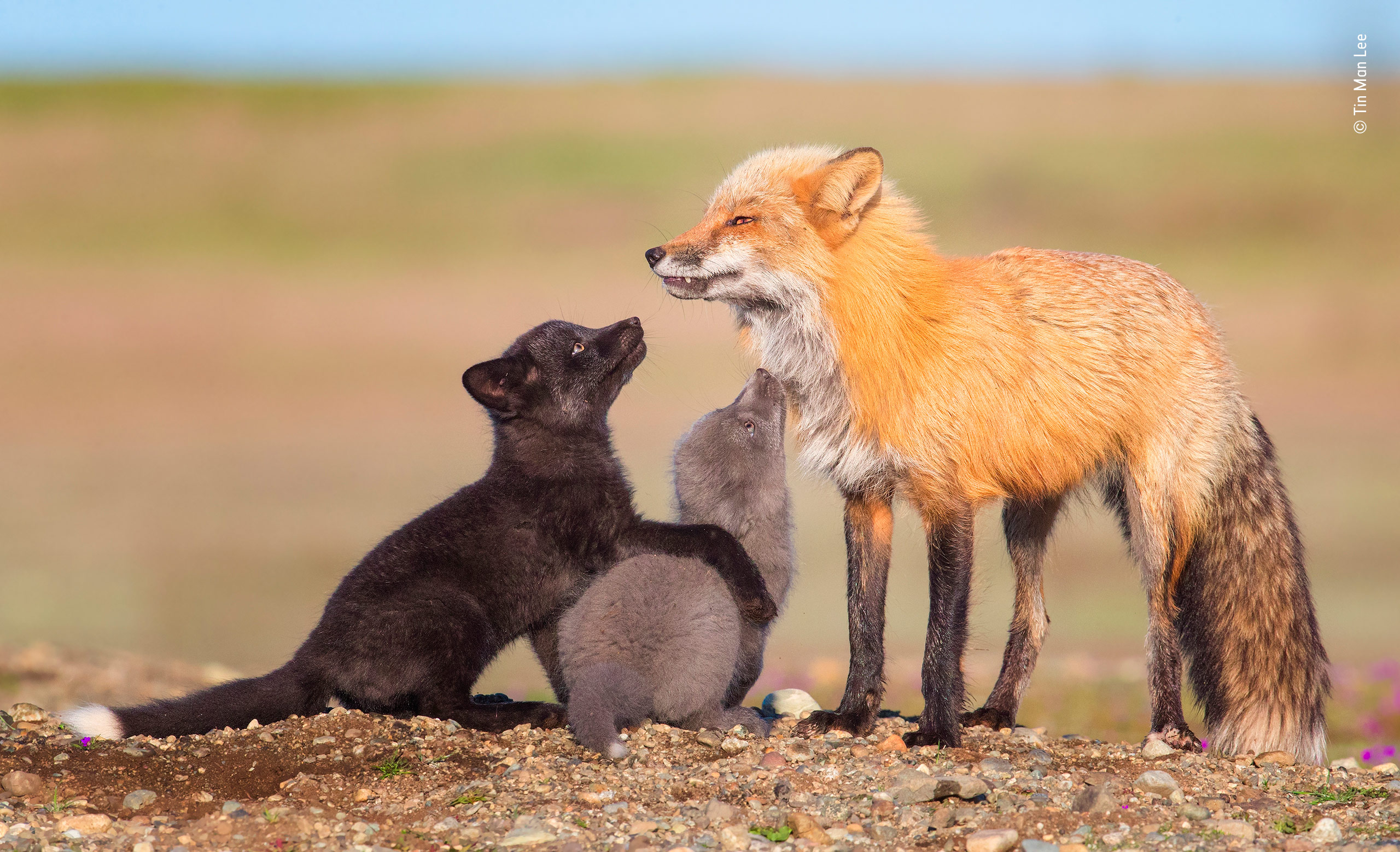 Tin was fortunate enough to be told about a fox den in Washington State, North America, which was home to a family of red, black and silver foxes. After days of waiting for good weather, he was finally rewarded with this touching moment. 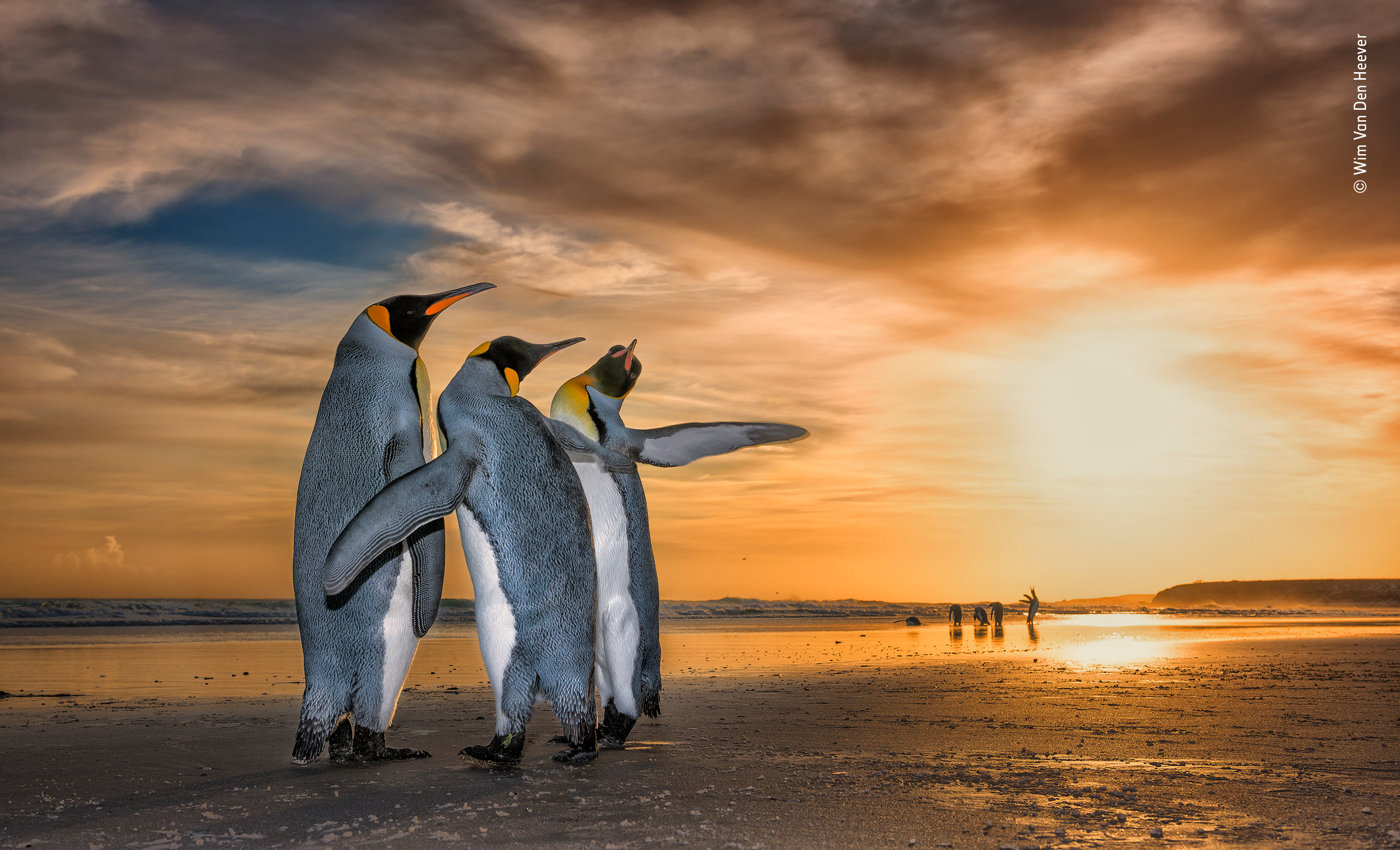 Wim came across these king penguins on a beach in the Falkland Islands just as the sun was rising. They were caught up in a fascinating mating behavior – the two males were constantly moving around the female using their flippers to fend the other off.