Today is a monumental day in the fight against climate change. Thanks to the European Union’s recent vote to ratify the Paris agreement, it now has enough participants required to come into force, but there is a 30-day waiting time for the agreement to kick into gear.

As announced by the UN, this means that the most comprehensive attempt yet at saving the world from the nightmares of unmitigated climate change will begin to take effect on November 4.

“This is a momentous occasion,” UN Secretary-General Ban Ki-moon declared in a statement. “What once seemed unthinkable, is now unstoppable.

“Strong international support for the Paris Agreement entering into force is a testament to the urgency for action, and reflects the consensus of governments that robust global cooperation, grounded in national action, is essential to meet the climate challenge.”

Obama, speaking in the Rose Garden, welcomes the news on October 5. Associated Press via YouTube

Just this September, the US and China, who alone produce 38 percent of the world’s carbon emissions, ratified the agreement in a day many thought would never arrive. This boosted the confidence of other sizeable nations in the pioneering pact, and shortly afterward, India and the EU followed suit.

And this week, Canada’s parliament voted overwhelmingly to enter into the climate change agreement, as did New Zealand and Nepal.

Speaking from the White House, President Obama said: “Today is a historic day in the fight to protect our planet for future generations. This gives us the best possible shot to save the one planet we got.

“With optimism and faith and hope, we are proving it is possible.”

There is, without a doubt, more to be done on the pact. Very few countries have seriously begun to reduce their carbon footprint, and the Paris agreement will need to be strengthened over time if there is any hope of preventing the 2°C (3.6°F) warming limit from being breached. The US is already on track to marginally miss its 2025 carbon-cutting targets.

Our atmosphere is suffocating in carbon dioxide, having just breached its own ignominious, historic threshold of 400 parts per million. Even with our oceans absorbing a staggering 90 percent of our excess heat brought about by emissions, the world is warming ten times faster than would naturally be expected.

Without a massive step towards renewable and nuclear energy, along with vast international cooperation and plenty of economic and technological support for less-developed nations, the world is certain to breach the 2°C limit by 2050. Nevertheless, this is the first good, solid start that humanity has ever had in turning back the (literal) tide.

It hasn’t gone unnoticed that the pact will enter into force three days before the US presidential election. Clinton will work to enforce it, whereas Trump famously declared that global warming is a Chinese hoax. Worse, he has promised to veto the agreement, much to the pleasure of his supporters and many Republican lawmakers in Congress.

However, its earlier-than-expected enforcement means that any opposition to it may have been routed. According to the Wall Street Journal, once the deal goes into force, a nation must wait three years before opting to withdraw, and wait an additional year to actually make leaving official.

So on the off-chance Trump does get elected, he will likely face a resurgent Democratic opposition in Congress working to prevent him from vetoing the pact – along with the fact that most of the American public want their country to take a leading role in combatting climate change. 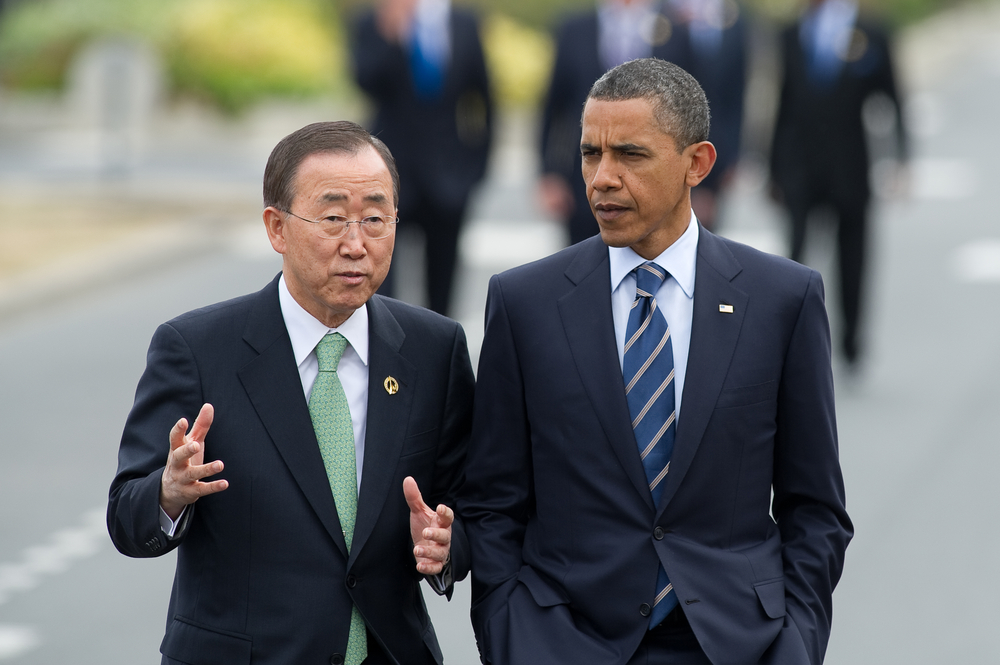 Obama and UN Secretary-General Ban Ki-moon were keen to get the agreement enacted before their terms in office ended. Frederic Legrand – COMEO/Shutterstock