Today is World AIDS Day and with 35 million people around the world being HIV-positive, it is important to dispel the many myths that surround the subject.

How Is HIV Transmitted?

HIV doesn’t survive outside the body so you can’t get it from touching or hugging someone, from sharing forks, glasses, or even sharing a toothbrush. HIV doesn’t spread through coughing, sneezing or spitting and it is not found in urine or feces.

The odds of contracting HIV through oral sex or kissing are extremely low. It's only risky if the people kissing both have large open sores in their mouth or bleeding gums. There has never been a documented case of infection from saliva.

More importantly, thanks to the advances in medical treatment of HIV, people who have an undetectable viral load have literally a zero percent chance of passing on the virus. 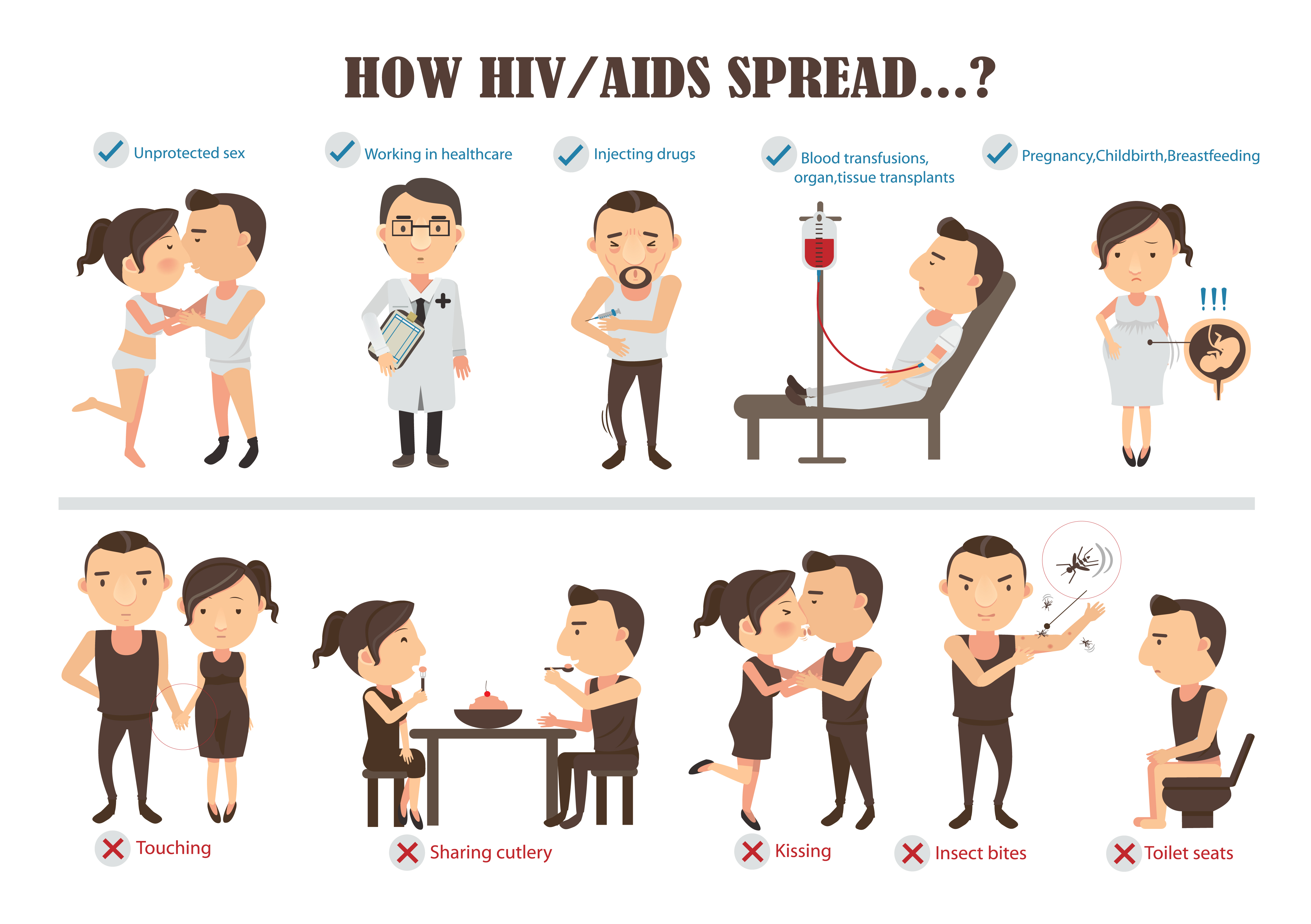 AIDS Is Not HIV And Neither Are A Death Sentence

HIV stands for Human immunodeficiency virus, which infects and attacks the immune system. If it is not treated, and the number of white blood cells falls below 200 per microliter, you will then be diagnosed as having Acquired Immunodeficiency Syndrome (AIDS), the last stage of HIV.

Being HIV+ or having AIDS has not been a death sentence for many years, though. There are over thirty different medications approved by the US government and there are treatments to regain white blood cells.

Although one person has been cured, there’s still no cure for HIV and people who believe that the US government or Big Pharma are keeping it a secret are actually making thing worse for the people who have the virus.

HIV is related to a similar virus found in monkeys, called the Simian immunodeficiency virus (SIV), which is believed to have mutated into HIV in the early 20th century.

Bushmeat hunters and vendors in sub-Saharan Africa commonly acquire SIV and it is suspected that European colonialism in Africa is responsible for the spread of the virus (and not, to debunk another myth, by a guy having sex with a monkey). The expansion of African cities due to Western interest might have played a significant role in the spread of STIs including HIV.

It’s The Ignorance That Kills

There are many ways to stop the spread of HIV. Pregnant women can stop passing the virus onto their offspring by taking treatment drugs called antiretroviral therapy. Blood and organs that are being donated are always screened for HIV. When it comes down to sex, good old fashioned condoms are incredibly effective and so is PrEP, the pre-exposure prophylaxis, which requires you to take a single pill a day to be protected. In case of some at-risk behaviors, people can even take PEP, post-exposure prophylaxis, which prevents the infection taking hold.

So if there are so many ways to prevent the spread, how come there are around 50,000 new infections every year? The main cause is ignorance. People are not aware that they are engaging in risky behavior, they don't know about regular testing, and they are not aware that HIV is manageable.

HIV affects many minority groups. Forty six percent of newly-infected people in the US are African-American and 63 percent are men who have sex with men. The reason why HIV affects marginalized sections of the population more are not to be found in the words of preachers and politicians who claim that it’s a punishment but in the societal factors of poverty, education, access to healthcare, racism, and homophobia that bar groups and individuals from getting help.

Ignorance is not just on the people who get infected but also on the rest of society. If people are not taught the basics regarding HIV, how can they understand it? For example, a member of the Northern Irish parliament recently stated that he had no idea that heterosexual people could contract HIV.

“In the United Kingdom, we haven't talked about it in a public information campaign for 27 years," Tom Hayes, Trustee of Saving Lives UK, told IFLScience. "1989 was the last government campaign, while countries like Canada do it almost annually. It is very worrying to see that general public knowledge goes from incredibly limited to non-existent.”

Finally, there are people who willingly spread false information regarding the condition, its cause and how to treat it. Their agenda is to make a quick buck by peddling easily disproven conspiracy theories claiming that HIV doesn’t exist or that homeopathy can cure it.

Although HIV is a manageable disease, people who live with it are often stigmatized and struggle not with the virus but with other people's misconceptions. So please continue to stay informed, support the research and help fight the stigma.