This year, we’ve been knocking it out of the park when it comes to climate change records. Every single month this year has set global temperature records, with August most recently being crowned the hottest ever August on record. Arctic sea ice extent has also been bottoming out too, with some months setting all-time lows, and others coming pretty close.

The National Snow and Ice Data Center (NSIDC) in Colorado has released its latest figures, and – surprise surprise – it is the very opposite of good news. Last Saturday, Arctic sea ice reached its summer low point, the second lowest level based on satellite records. In fact, this year’s extent is roughly 2.56 million square kilometers (990,000 square miles) below the 1979 to 2000 average – a loss that equals the area of both Alaska and Texas combined.

Although this year’s sea ice extent is 10,000 square kilometers (3,900 square miles) below that recorded in 2007, the two values are so close that both 2007 and 2016 are essentially tied for second place behind 2012. It may seem like good news that this year didn’t take the ignominious top spot, but as always in the case of climate change-related data, it’s the trend you need to pay attention to rather than the individual records.

“We have reinforced the overall downward trend. There is no evidence of recovery here,” NSIDC director Mark Serreze told the Associated Press. “We've always known that the Arctic is going to be the early warning system for climate change. What we've seen this year is reinforcing that.”

It’s been an unusual few decades for the Arctic. As NASA points out, there hasn’t been a record high monthly sea ice extent since 1986. In the last 37 years, there have been a distressing 75 new record monthly lows.

Even this year has been fairly bizarre. The sea ice extent has been continuously bottoming out, despite the fact there were plenty of storm fronts covering it that usually keep it cloudy and cooler. The sea ice melted away anyway, and not just the seasonal, transient ice – some of the oldest ice in the region has dissolved away as ocean sea surface temperatures steadily rise. 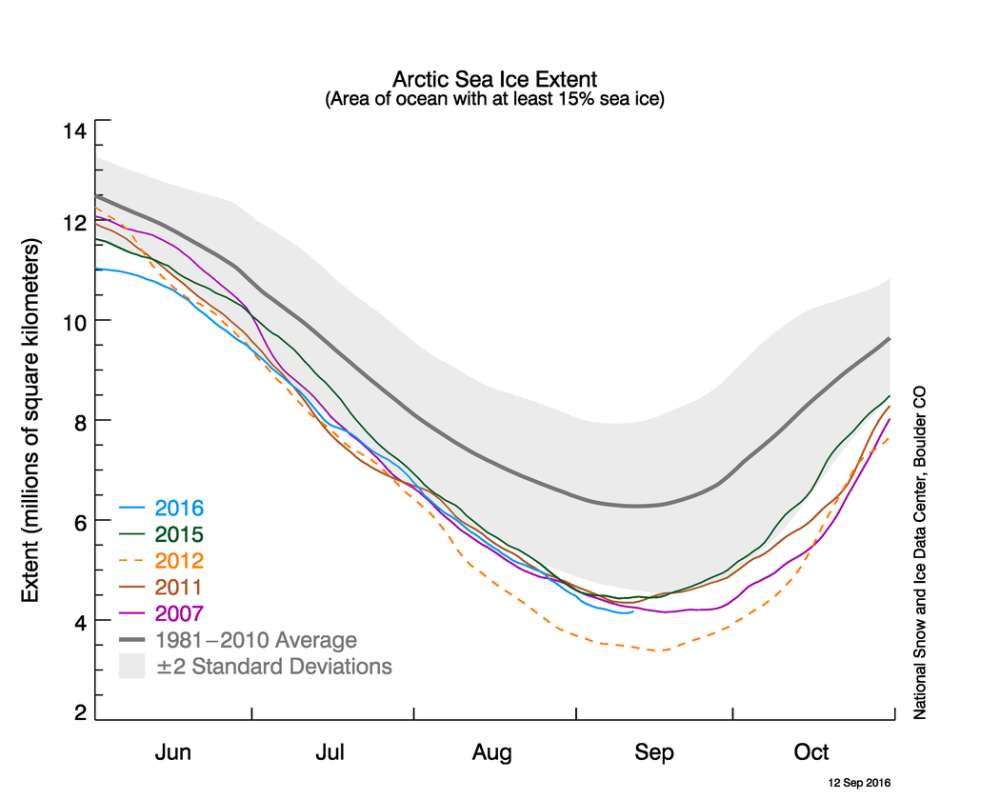 For now, 2012 is the "winner" of the lowest ever summer sea ice extent awards. NSIDC

The NSIDC is somewhat convinced that by the summer of 2030, all of the summer Arctic sea ice will have disappeared. When you take a look at the most up-to-date data, it’s not difficult to see why such grand claims are being made.

The world is warming 10 times faster than what would naturally be expected after a glacial maximum. Without the oceans absorbing so much of our carbon dioxide emissions, it would actually be warming 360 times faster – and this particular carbon sink is beginning to get full.

The Arctic, however, is warming twice as fast as the rest of the planet due to a phenomenon named Arctic Amplification.

Right now, it acts as Earth’s reflective global warming shield, bouncing back plenty of incoming solar radiation into space. As Arctic sea ice fades away, less is reflected and more of it is absorbed by the seawater, which stores heat energy for a considerably long period of time. This warmer water melts more ice, which allows more of the sea to absorb incoming radiation.

This cycle reinforces itself, which means that the Arctic ice is disappearing at an accelerated pace, year-on-year, and the region warms faster and faster as a result. With no summer sea ice left by 2030, the world will have lost its climate change shield. Clearly, it’s not just the polar bears that will suffer – it’s everyone, and everything.