Oh, volcanoes, you deliciously deadly things. There are so many ways that these mountains of fire can kill you – pyroclastic flow, superfast mud flows, ash fallout, lava bombs, you name it. They’re creative, indiscriminate and not to be messed with.

Speaking of which, have you ever wondered what it’s like to take a tumble into some lava? Thanks to a mixture of scientific experiments and a few unfortunate individuals themselves, we know the answer.

As long as the lava flow is suitably thick, you die as you sink into the molten rock and the heat overwhelms your organs. If they haven’t shut down due to stress, then the lava will pour in and physically eat away at them. Fascinatingly, there is a lot more nuance to it than that, but those are the basics.

Firstly, it’s worth pointing out that there are various varieties of lava. Some are hotter, others are cooler, and some are stickier. The lava’s properties will determine how fast or slow your untimely demise will be.

Generally speaking, most lava is around 1,000°C (1,832°F), and it’s incredibly sticky, or “viscous”. It’s more like a very gloopy oil than water, so when you fall into it, it’ll stick to you like glue. As the average lava is 3-4 times as dense as you, you’ll sink slowly too; in fact, you might just float atop its surface depending on how much you struggle.

So, upon hopping in for your deadly bath, you’ll get stuck at the surface as the lava begins to give you full thickness burns. This injury is the type that not only destroys the upper layer of your skin (epidermis), but quickly destroys your nerve endings and severs your blood vessels within your underlying dermis. Your subcutaneous fat will also boil off, so in effect, you’ll be seared like a beef steak. 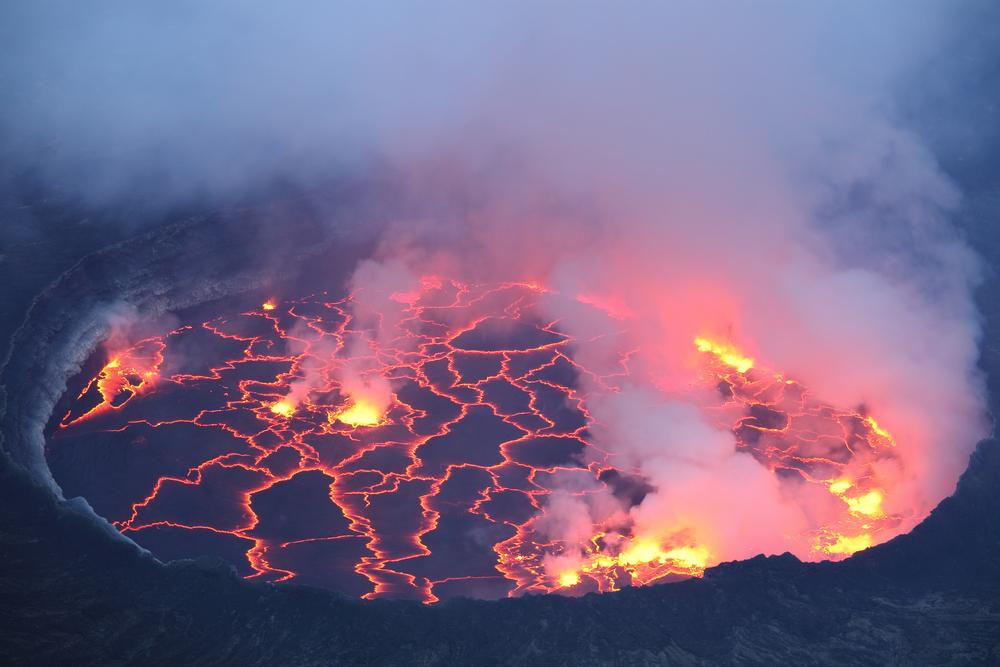 Nyiragongo's lava lake with a crust adorning its surface. Photovolcanica.com/Shutterstock

Your skin won’t have a chance to be turned into a dehydrated form of leather – unless you manage to get back out, of course. Your poor skeleton won’t be able to withstand the extreme temperatures, and it’ll melt away too until there’s literally nothing left.

Don’t fret, though. Thanks to the mixture of highly toxic, acidic, and hot gases inside a lava lake, you’ll likely asphyxiate, pass out and die before the lava properly gets to melt your abdomen away.

Some of the coolest lava on Earth can be found at Ol Doinyo Lengai, a strange volcano in Tanzania that sits atop the East African Rift, the line along which the continent is tearing itself apart. At temperatures never exceeding 510°C (950°F), there is a chance you will fall in and survive, just as a local Maasai tribesman did a few years back.

The problem is that this lava is so fluid – up to 10 times more fluid that water, according to some accounts – that it would literally chase you downslope if you were trying to run away from it.

It’s nothing compared to the fastest lava in the world though, which can be found at Nyiragongo, a stratovolcano in the Democratic Republic of Congo. During a 1977 draining of its lava lake, 1,200°C (2,192°F) streams of hell were moving out of the volcano’s fissures at 60 kilometers (37 miles) per hour. Good luck outpacing that one.

Actually, if spectacular pyrotechnics are your thing, then lava lakes are right up your street.

A bag of rubbish being thrown into Erte Ale's lava lake back in 2002. It does not go quietly. Photovolcanica via YouTube

There’s often a cooled crust at the top, so if someone tumbles into one of these natural crème brûlée, they’ll smash through it. This will upset the lake, causing it to explosively release a lot of gas and setting off a series of fiery outbursts all around the new visitor splashing around in the center.