A study of 19 fossilized dinosaurs have found that one species had teeth when young, but lost them in adulthood. The species involved was related to modern birds, and may help unravel the origins of the beak.

Dr Shuo Wang of the Capital Normal University in China has been examining a collection of theropod dinosaurs with the marvelous name Limusaurus inextricabilis.

Wang began studying juvenile L. inextricabilis fossils 15 years ago. When he first came upon adult specimens, he didn't recognize them as the same species. “Initially, we believed that we found two different ceratosaurian dinosaurs from the Wucaiwan Area, one toothed and the other toothless, and we even started to describe them separately,” he said in a statement.

In the course of detailed examination, however, Wang and his colleagues noticed that, teeth aside, these animals looked remarkably similar. Another 77 developmental differences have been identified between the adults and their young, Wang reports in Current Biology, but they nevertheless come from a single species that did not grow new teeth after losing their childhood ones.

Unfortunately for the L. inextricabilis, their habitat in northwestern China in the Upper Jurassic contained muddy traps in which animals of all ages became stuck. Wang has found L. inextricabilis specimens in three deposits, two from roughly the same time and the other from somewhat later. He has found fossils at six stages of development, from hatchlings and juveniles to subadults and adults. The paper describes this as “one of the best-documented growth series for an extinct theropod species.”

As useful as humans find teeth, some living species lose them as a natural part of growing up, not including cases where tooth decay or gum disease affects an unfortunate individual. However, this is both the first fossil record of a species that lost its teeth in adulthood and the first case we know of in a reptile. Moreover, modern species that lose their teeth in this way, such as the platypus, don't usually have a fully formed set to start with, whereas L. inextricabilis had at least 21 full teeth at age one.

The authors believe the young L. inextricabilis must have consumed a different diet to their elders, most likely being omnivorous, before evolving to a purely plant-based diet as adults. Isotopic analysis of adult specimens produce similar results to other herbivores, but the younger animals are much more varied, suggesting the youngsters' diets were dissimilar, perhaps changing with the seasons.

It's still not clear why the adult L. inextricabilis found teeth an evolutionary drawback. The absence of dentition in birds is usually attributed to the need for flying creatures to minimize their baggage allowance, but L. inextricabilis was a ground-dweller. Nevertheless, further study may help explain why hens' teeth today are in such short supply.

Other changes we have observed with age include the development of a shallower head, longer finger bones, and stones in the digestive system to grind up unchewed food. 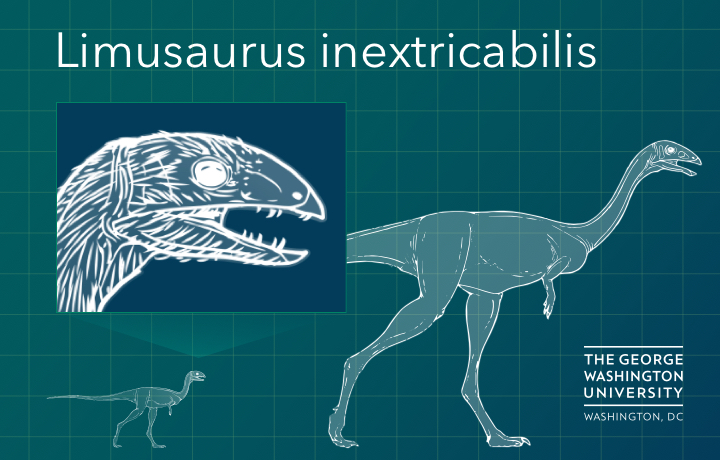 A comparison of Limusaurus inextricabilis' mouthparts when a juvenile and an adult. George Washington University