We all know sex sells, but what about sex cells? Unlike plants and primitive animals, mammals have germlines, specific cells formed during gestation that are distinct from the other cells in the body. The reason for this has been debated, but a new study describes it as necessary to protect mitochondria from the build-up of mutations.

In vertebrate animals, and many invertebrates, the germlines form the eggs and sperm that will make future generations. Plants and simpler animals, such as sponges, produce their sex cells later in their development from the cells that make up other tissues in the body.

"There have been many theories about why mammals have a specialized germline when plants and other ancient animals don't. Some suggest it was due to complexity of tissues or a selfish conflict between cells. The distinction between sex cells and normal body tissues seems to be necessary for the evolution of very complex specialized tissues like brain,” said Arunas Radzvilavicius, a PhD student at University College London, in a statement.

In PLOS Biology, Radzvilavicius sets out an alternative theory: The reason we need a germline is to provide future generations with the best mitochondria.

Mitochondria are often described as the cells' power stations, producing the molecules that act as energy sources within cells.

Rates of mitochondrial mutation vary significantly between different life forms. In plants, for example, these rates are low. When tissue cells divide, some receive a larger dose of mutant mitochondria than others. When, as is usually the case, the mutation is harmful, natural selection weeds these out.

Mobile animals, particularly mammals, have much higher metabolic rates, forcing our cells to undergo far more rapid division. This provides more opportunity for genetic errors in our mitochondria. If we formed our sex cells out of tissue cells, the malfunctioning mitochondria would cripple most offspring. By preserving the sex cells in a dedicated germline, with cells that divide far less often, most animals have found a way to reduce the mutations we pass on.

Without the germline, we might still have sex – after all, many plants reproduce sexually – but things would work very differently. Since it is the female line that passes on the mitrochondria, what is important is that egg cells, not sperm, are protected from cell division cycles. Consequently, the production of sperm can continue throughout life.

Destructive as mutations usually are, they are also the raw material for evolution. Without them, species would never evolve, so it doesn't do to prevent them entirely. Mammals produce large numbers of egg cells, only some of which develop into actual eggs, and there is presumably a sorting process where unviable mutations are weeded out, while at least some beneficial ones survive.

Radzvilavicius' theory is, of course, hard to prove, but the paper presents mathematical modeling of the benefits and costs of having a germline at different rates of cell division. Radzvilavicius and his co-authors think the germlines date back to the Cambrian explosion, when oxygen levels became high enough to allow complex animals to form and hunt each other. This required more energy and put more strain on their mitochondria, leading to an increased rate of mutation.

The system is still far from perfect. Even in humans, damaging mitochondrial mutations are common, which is why three-parent babies have recently been legalized in the UK, allowing the replacement of mitochondria in eggs from women whose children would otherwise inherit mitochondrial diseases. 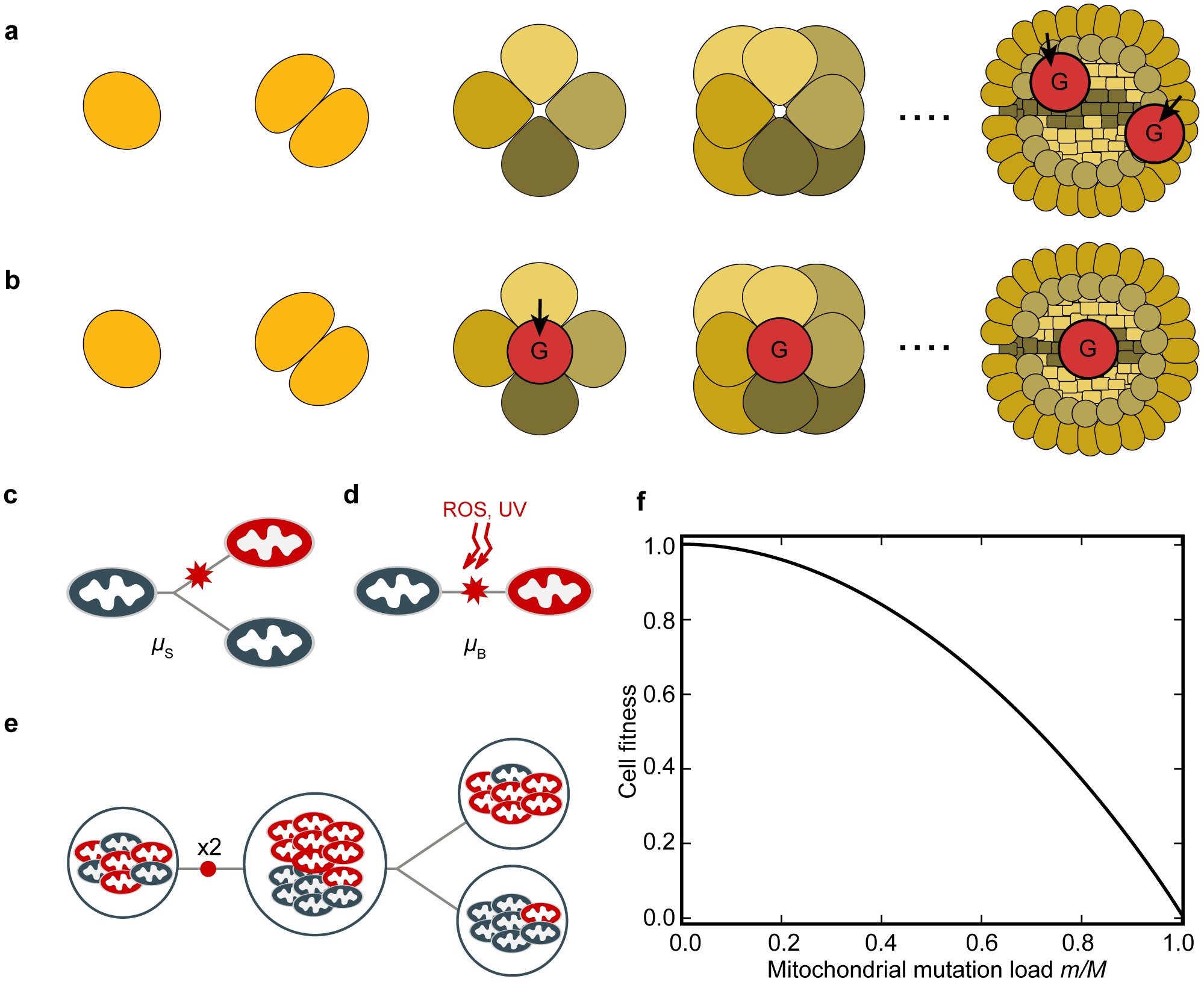 The lifecycle of multicellular organisms. a) Differentiation of cells, with subsequent formation of sex cells or gametes (G) in plants or simple animals. b) The same process in animals like vertebrates, where the sex cells differentiate far earlier. (c) Copying errors (?S) during replication of mitochondrial DNA. (d) Mutations caused by background damage (?B) (e) Mitochondrial mutants (red) at cell division get sorted so that some daughter cells are high in mutations. (f) Cell fitness declines with the accumulation of mitochondrial mutations in a concave function, leading to mitochondrial diseases at high mutation loads. Radzvilavicius et a./PLOS Biology.