A new study in the journal Science Advances has confirmed that there was not a pause or even a slowdown in global warming at the start of the 21st century. Having successfully replicated the results of an earlier, key research paper, the team hope to put a long-standing controversy to rest.

Ah, the “pause” in global warming – the misconception that won’t die. According to climate change deniers, global average temperatures remained relatively constant between 1998 and 2013, which apparently showcases that climate change as a whole is something of a hoax. Of course, this is pure fantasy.

The respected Intergovernmental Panel on Climate Change (IPCC) reported back in 2013 that, compared to the last 60 years, the mercury had been rising slower than expected. They clearly explained in their assessments that the world was still warming, though. So one could describe the period of 1998 to 2013 as more of a “slowdown”, really.

However, back in 2015, the National Oceanic and Atmospheric Administration (NOAA) found a problem with the data sets being used. In the early 1990s, most sea surface temperatures were recorded using ship intake valves, but nowadays, more technically precise buoys are used.

Taking the buoys, ships, satellite data and more into account, it became quite clear that the global temperature increase between 1998 and 2013 had not slowed down, but kept pace with what earlier trend lines had shown. The problem in earlier studies appears to have come from the way the ship data was subjectively given too much importance. 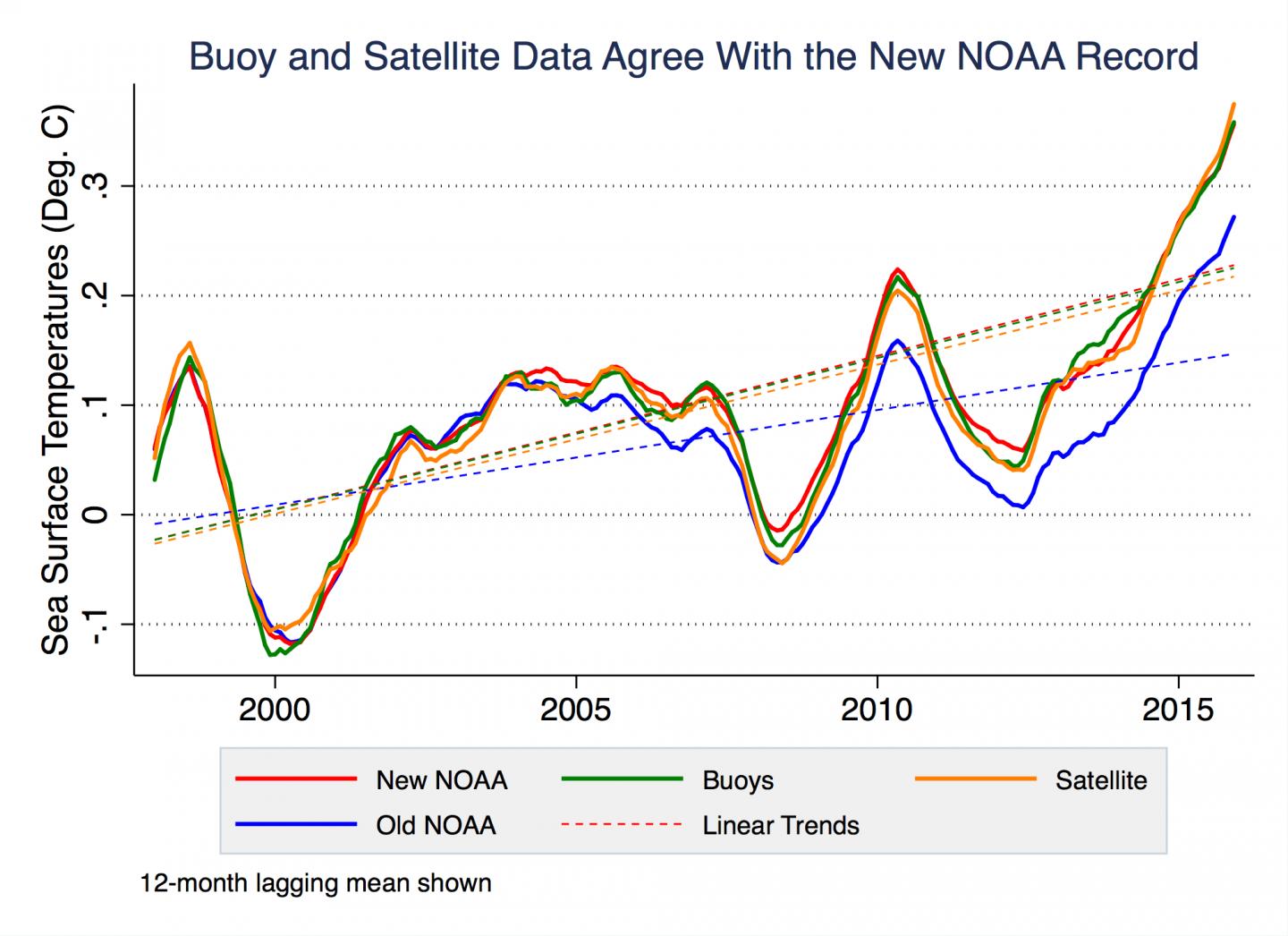 The new analysis confirms that temperatures have increased steadily since 1998, and no slowdown happened. Hausfather et al./Science Advances/UC Berkeley

The authors of the new paper reveal that they were spurred on to confirm the results of the NOAA study – and another corroborating data set from Japanese researchers – due to the political interference that came about soon after the 2015 study was published.

The US House of Representatives is full of climate change-denying politicians, always desperate to take any scientific study out of context in order to “disprove” climate change. After seeing the NOAA study, which definitively shot the climate change slowdown theory out of the water, they cried foul and demanded the scientists hand over their emails and data via a subpoena.

The scientists refused, believing quite rightly that other scientists, not politicians, should investigate their controversial new data set. Responding to the call, the new independent research team did just that, this time by assessing the ship, buoy, and satellite data separately rather than meshing them together.

Explaining the results of the new study. Zeke Hausfather via YouTube

“The bottom line is that NOAA got it right,” lead author Zeke Hausfather, a climate researcher at the University of California at Berkeley, told Scientific American.

“The scientific question of how fast the Earth has been warming over the past two decades can be answered by replication from the scientific community, not by a political investigation."