In what is thought to be the single biggest Arctic research expedition ever, a team of scientists is planning on getting a research vessel purposely trapped in sea ice and letting it drift over the North Pole. The plan is to study the Arctic in vast detail, in order to better understand what exactly is driving the dramatic climatic changes seen in the region over recent years.

The 120-meter (400 foot) research vessel, the Polarstern, will hopefully set sail in the summer of 2019, and then spend the next year on its 2,414-kilometer (1,500 miles) trip, as it moves with the drifting sea ice across the Arctic. Involving over 50 institutions from 14 different countries, researchers will set up camps and mount expeditions from the ship out onto the sea ice to take measurements that have never been possible before.

“The decline of Arctic sea ice is much faster than the climate models can reproduce and we need better climate models to make better predictions for the future,” said MOSAiC expedition co-leader Professor Markus Rex, at the annual meeting of the American Association for the Advancement of Sciences (AAAS) where the plan was unveiled. “There is a potential that in a few decades the Arctic will be ice-free in summer. That would be a different world and we need to know about that in advance; we need to know is that going to happen or will that not happen?” 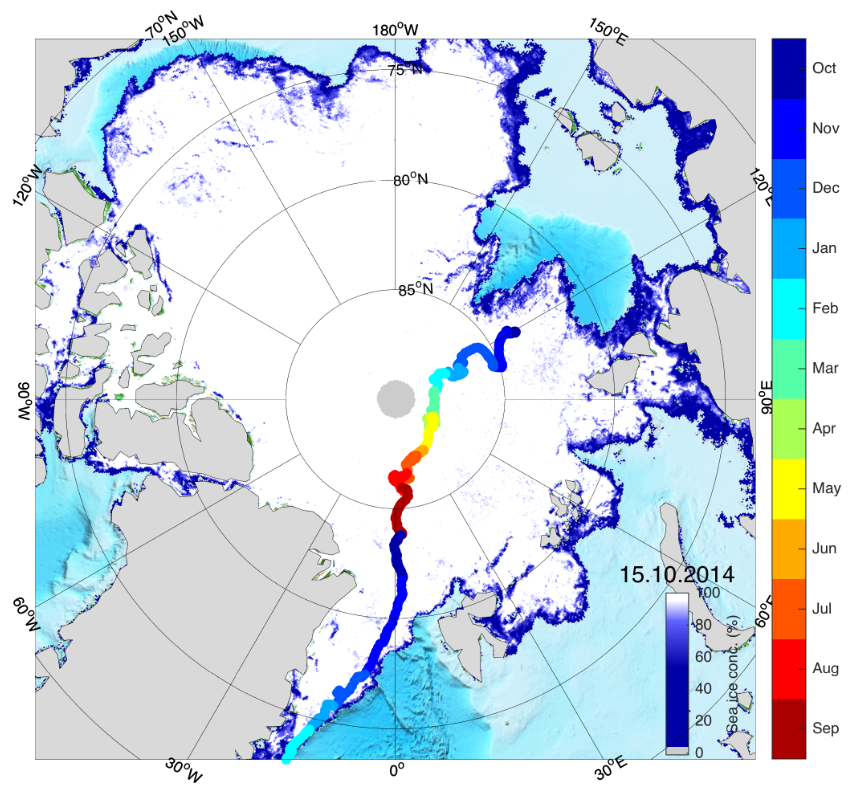 The expected route of the ship. MOSAiC

The undertaking will be treading in the footsteps of the famous expedition of the Fram, which the Norwegian explorer Fridtjof Nansen carried out in 1893. Nansen was attempting to become the first person to reach the North Pole using an audacious plan of getting the Fram stuck in ice and letting it be pulled there naturally. Unfortunately, Nansen had to abandon the ship mid-way, and ski to safety, but the Fram did eventually make it across the polar cap intact.

According to Professor Rex, there is actually very little danger in the mission. While the ship, and the groups sent out onto the ice, will have armed guards to protect against any errant polar bears, the ship itself is perfectly equipped for the extreme conditions. The hull is designed in such a way that as the ice closes in it will be strong enough to withstand most of the pressure, and if it does get too high the vessel will simply be lifted up by the ice.

The German expedition is expected to cost €63 million ($67 million) and will involve partner institutions from the UK, Russia, the United States, and China, who will be using state of the art technology get a full picture of the polar ice cap.