A new species of gecko has been discovered that doesn’t quite have a new way of escaping predators, it just does it better than anybody else.

The ability to drop their tail to escape a predator’s claws or maws is a common trait among lizards. The genus Geckolepis, also known as fish-scale geckos, has gone a step further, developing scales that tear away easily, allowing it to shrug out of its foe’s grasp and scarper to freedom.

Now, the newly discovered Geckolepis megalepis has been revealed to have the largest and most easily shed scales of all, making it the undisputed winner of the "lizard who can get naked the fastest" award.

The fish-scale geckos' skin is particularly adapted for tearing easily. The scales are attached by a narrow region that also tears easily, with the skin under the scales a pre-formed splitting zone, all of which makes them expert escape artists. And while some lizards take a long time to regenerate their missing body parts, these geckos can grow back their scales in a matter of weeks, without scarring. 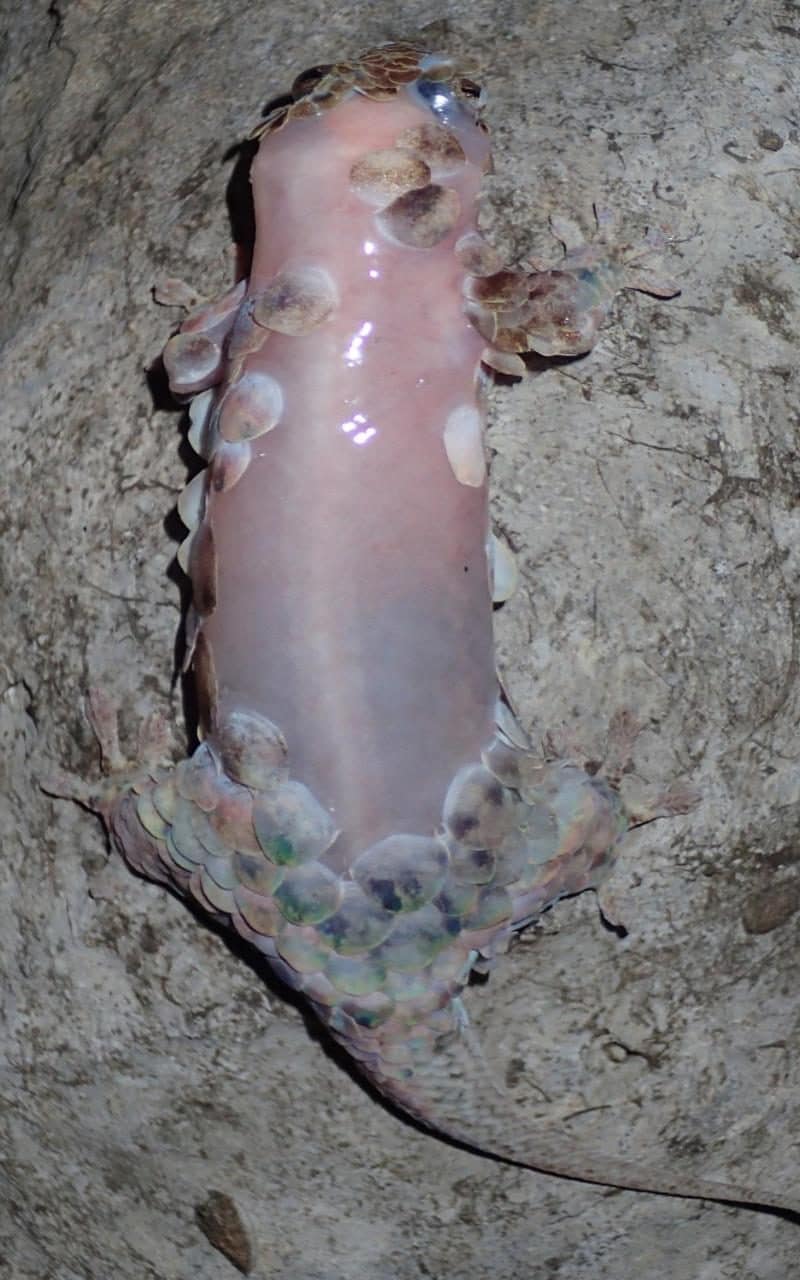 "Don't look at me, I'm naked!" Not only do fish-scale geckos shed their scales, but also much of their skin underneath. F Glaw

What makes G. megalepis stand out though is the size of its scales, the largest found amongst these types of geckos. The scientists hypothesize in PeerJ that the larger scales tear more easily than smaller scales because of the greater surface area relative to the attachment area, as well as the larger friction surface.

"What's really remarkable though is that these scales – which are really dense and may even be bony, and must be quite energetically costly to produce – and the skin beneath them tear away with such ease, and can be regenerated quickly and without a scar," said lead author Mark D. Scherz of the Ludwig Maximilian University of Munich.

Because fish-scale geckos can shed their scales actively and at the slightest touch, they have proven rather difficult for scientists to study. Previously, researchers have attempted using cotton wool to avoid touching them, so they don’t lose all of their skin. Researchers for this study lured them into bags in an attempt to not touch them at all.

Once they had some of the crafty creatures to study, they then encountered more problems with identifying and describing them. One of the main ways reptiles can be told apart is by their scale patterns, but these geckos lose their scales so easily that the patterns are often lost by the time they become adults.

However, attempting to study these slippery characters is worth it as the researchers think that the geckos’ mechanism for regeneration, along with studying how salamanders drop their limbs and lizards their tails, could have applications for human medicine.