Apparently, Americans have a hard time separating fact from opinion. This is according to a poll recently conducted by the Pew Research Center, which found that, on average, the public can correctly identify a fact and an opinion six times out of ten.

Respondents were presented with 12 statements and asked to categorize them as either "fact" or "opinion".

Just a quick recap – A fact is something that is demonstrably true, which means it can be proven correct or incorrect with evidence. An opinion is neither wrong nor right because it is a personal judgment, value or belief. You (and most of the world) might think Pantone 448 C is an awful color, for example. But Sheila down the road might disagree and she is not wrong.

The 5,035 adults involved in the study were not given these definitions. The purpose of the activity was to see if they could work it out themselves. Instead, the respondents were asked to identify statements such as "President Barack Obama was born in the United States" and "Abortion should be legal in most cases" as factual ("whether you think it's accurate or not") or opinion ("whether you agree with it or not"). There were five facts, five opinions, and two statements that were a little more ambiguous. An example of a "murky" statement could be, “Applying additional scrutiny to Muslim Americans would not reduce terrorism in the U.S.” (That is, by the way, an opinion.)

Just 26 percent of respondents achieved a perfect score on the factual set and only 36 percent correctly identified all five opinions. The average respondent was able to accurately classify three out of five statements in each category, which as the researchers point out "is only a little better than random guesses.” Roughly a quarter got all or most wrong, which sounds rather worrying but that is just my opinion.

Take the test on the next page!

Perhaps not-so-surprisingly, the researchers noticed that political bias had a major influence on a person's categorization. People were more likely to call something a "fact" if it aligned with their worldview and was something they considered to be "true". (Supporting a previous study that found scientific knowledge has a limited effect on Republican beliefs.)

There is, however, a small sliver of a silver lining. The researchers found that being politically aware and digitally savvy close to doubles a person's likelihood of identifying the statements correctly. Thirty-six percent of respondents with high levels of political awareness identified all five fact statements and 44 percent of those with high levels of digital competency got all five opinion statements correct. This was the case irrespective of a person's educational status.

"At this point, the U.S. does not seem to have become completely detached from what is factual and what is not," write the study authors. "But with the vast majority of Americans getting at least some news online, the gaps in ability across population groups to sort news quickly and correctly raises caution." 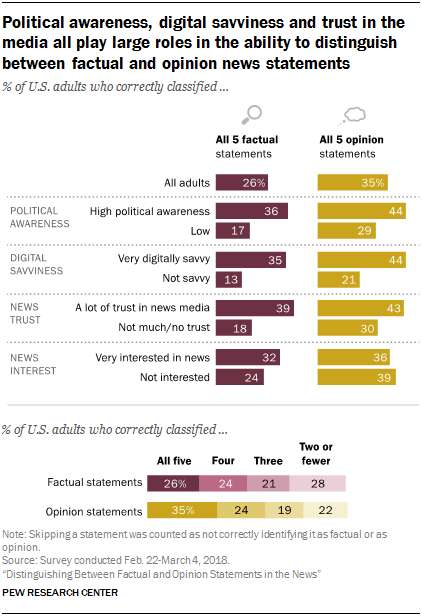 Think you’re savvier than the average American? Find out for yourself here.