The world's most famous hominin fossil has provided us with an answer to one of the big questions about our evolution: When did our ancestors come down from the trees? It seems the shift was underway (but incomplete) 3.18 million years ago, when the individual known as Lucy died.

Lucy was an Australopithecus afarensis, discovered in 1974 near Hadar, Ethiopia. She became famous as the first member of her species where we have more than a single bone, and has been the subject of intense study ever since. Despite decades of research, advances in technology are bringing to light new findings about Lucy and her species. The latest indicates that she was less of a tree dweller than chimpanzees, but not yet fully adapted to walking on the ground.

Professor Christopher Ruff of Johns Hopkins University scanned Lucy's remaining bones using X-ray microtomography, allowing for the creation of 3D models of her humerus (upper arm bone) and femur (upper leg bone) that are more accurate than anything we have had before.

Humans have much stronger leg bones than arms, reflecting the fact that we mostly get around on two legs. Chimpanzees, on the other hand, are far more evenly balanced, since they need strong arms to climb trees.

The midsection, or diaphysis, of long bones is shaped by the mechanical strains it experiences. This is not a matter of evolutionary legacy, but depends on the lifestyle of the individual whose bone is being measured. Fossil evidence from some of our more recent ancestors, such as Homo erectus, show their legs bones were within the ranges of modern humans, but similar studies have not been done on australopithecenes. 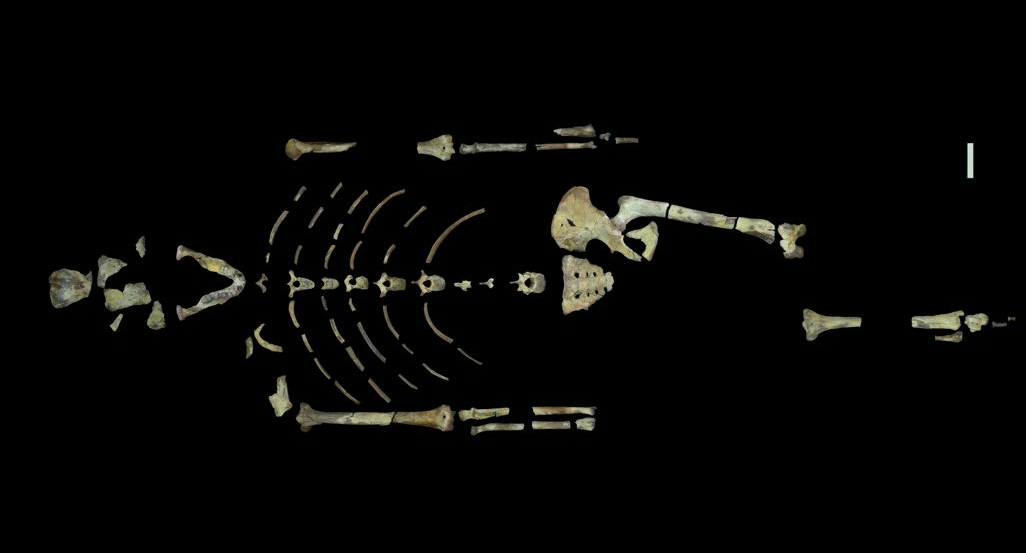 We don't have all of Lucy's bones, but the collection is unusually complete. John Kappelman/University of Texas at Austin

In PLOS One, Ruff reveals that the ratio between Lucy's arm and leg bones suggest a greater loading on lower limbs than is seen in apes, but arms with more strength than in modern humans or Homo erectus.

Anthropologists previously observed that Lucy's arms were long for her size, as would be expected for a species that spent at least some of its time climbing trees, but this was not considered conclusive. Evolution can be slow, and if long arms were not a threat to the survival of our first bipedal ancestors, they might have retained them long after they ceased to spend much time up in the trees.

Ruff's work, however, provides a firmer foundation for the suspicion that Lucy climbed much more than modern humans, either for food or safety from predators. The conclusion that Lucy spent plenty of time in the trees, but was no longer as good a climber as chimpanzees, is consistent with the discovery earlier this year that Lucy appears to have died by falling, her arms stretched in front of her in a vain attempt to break her fall.

Ruff also found that Lucy was probably much stronger, relative to her small body size, than modern humans – a characteristic shared with chimpanzees – possibly because she wasn't redirecting so much of her food intake to support a large and energy-hungry brain.

Many of Lucy's bones have been lost, so comparisons cannot be made between her legs, but Ruff also observed her right humerus was 10-15 percent stronger than the equivalent bone on her left arm, suggesting she was right-handed.