Japan has lifted all its tsunami warnings after a 6.9M earthquake, which struck off the country’s eastern seaboard at 06:00 am local time, did not ultimately cause major damage to the region. Occurring at a shallow depth of 11.3 kilometers (7 miles) just off the coast off the city of Namie, warnings of a 3-meter-high (roughly 10-foot) wave were fortunately unfounded.

The tremors – originally registering as a 7.4M – reached Fukushima, where one of the cooling systems at the troubled nuclear power plant briefly shut down. At the time of writing, everything has been restored to working order, and the highest wave crest was seen at the port of Sendia, where it reached 1.4 meters (4.6 feet). There have been no casualties.

When the earthquake struck, many around the world held their breath. Although not as energetic as the 9.0M quake that devastated the region with its accompanying tsunami back in 2011, the powerful 6.9M event and the tsunami warning that followed was enough to cause immediate concern. Thousands along the coast were evacuated, but luckily, this time was a close escape.

The two earthquakes are connected, however.

Japan is one of the most seismically active countries in the world, accounting for around 20 percent of all events registering as a 6.0M or more. It sits atop the destruction of the Pacific Plate, which is sliding beneath the continental Okhotsk Plate at a rate of around 9 centimeters (3.5 inches) per year. This destruction is responsible for many of the archipelago’s volcanoes and earthquakes.

When the Pacific Plate gets stuck during its so-called “subduction”, it builds up stress. Sometimes this stress can accumulate to unfathomable degrees, which, when slipping, unleashes vast amounts of energy.

This was the mechanism behind the March 2011 Tohoku disaster, which released centuries of pent up stress in mere minutes. In fact, that specific quake unleashed about twice the surface energy of the 2004 Indian Ocean earthquake, and about as much as the largest nuclear weapon ever detonated.

Based on the limited data available so far, this recent 6.9M quake is based on the same mechanism, but this time, less movement overall was observed and less energy was released. It can technically be seen as an aftershock of the 2011 event, and another sizable, if smaller, quake is likely to take place within the next few weeks. 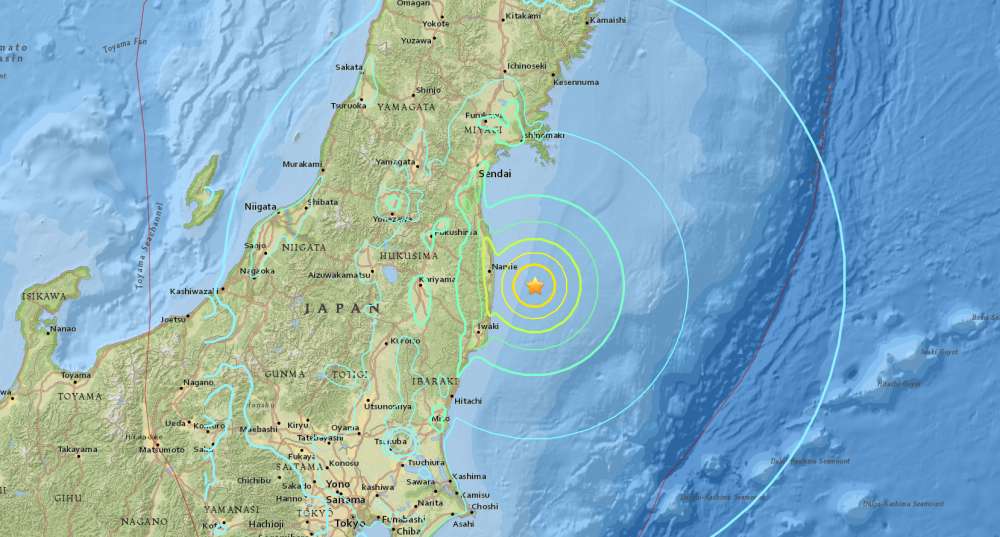 The epicenter of the 6.9M earthquake that struck on November 22. USGS

The Japan Trench is, generally speaking, a thrust fault, which means that one large block slides down over another. In this case, when the Pacific Plate jutted forwards, it was able to move a huge volume of water forwards, which generated a tsunami.

A tsunami can be compared to pushing a Slinky at one end, where the water moves forward in one direction without moving up and down and disturbing the surface of the water. It isn’t noticeable until it reaches the coast, where all that moving water piles up on itself and rises upwards over the land.

A gif showing the acceleration of the ground the moment the earthquake struck.

Although frightening, it’s very lucky that this recent quake didn’t do any more damage. It’s worth noting, though, that the 2011 ancestor was almost 1,000 times more powerful. Sadly, due to the inexorable march of the Pacific Plate westwards, stress will keep building up, and one day another 9.0M quake will occur in the region.

It’s very difficult to say when, but a general rule of thumb is that these powerful quakes take several lifetimes to store up enough energy in order to occur. So there will not be a repeat of the 2011 event in our lives, at least not in Japan.