Even very ill winds can blow quite a bit of good. Hurricanes in the United States have been found to draw extraordinary amounts of carbon dioxide out of the atmosphere, albeit temporarily.

The link between cyclonic storms, known as hurricanes in the Atlantic, and high temperatures has proven to be one of the harder aspects of climate change to unravel. The warmer surface waters that global warming is creating fuels more powerful storms. On the other hand, wind shear – differences between wind direction at different altitudes – disrupts hurricane formation, and climate models predict this to increase. The overall impact is still greatly debated, but the most popular theory is that warmer temperatures will bring fewer hurricanes, but some will be of unprecedented power.

The reverse question of what impact hurricanes will have on climate change has been largely ignored as irrelevant. However, a paper in the Journal of Geophysical Research: Biogeosciences has challenged this, showing that forests in the American south become much more productive after hurricanes, and their growth has a substantial impact on atmospheric carbon dioxide.

Flooding is often the most serious effect from cyclones, and it is no secret that after the worst of the storm has passed, the heavy rains they bring can provide relief for drought-stricken regions. In 2013, Professor Ana Barros of Duke University showed that these events are vital to maintaining the region's hydrology, often helping sustain water supplies long after they have passed.

Now, Barros and her doctoral student Lauren Lowman have looked at how all this extra water affects forest growth.

"It's easy to make general statements about how much of an impact something like additional rainfall can have on the environment," Lowman said in a statement. "But we really wanted to quantify the amount of carbon uptake that you can relate to tropical cyclones."

The years 2004 and 2005 were big ones for North Atlantic hurricanes, allowing a comparison of how this affected the forests of the southeastern U.S. with the subsequent calmer years. Lowman and Barros found hurricanes drove a 9 percent increase in growth in wet years and 4 to 8 percent in dry years. 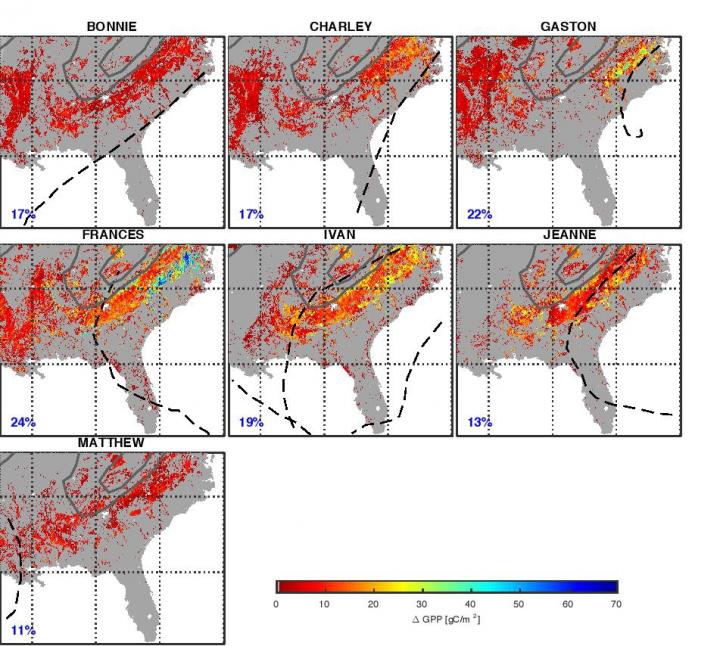 The paths of hurricanes in 2004 (in grey) and the changes they produced in the productivity of forests. Lauren Lowman, Duke University

These might sound like small changes affecting only one region of the U.S., but they actually mean that hurricanes cause the drawdown of far more carbon than is released annually by all the cars in the vast American driving fleet. Sadly, this is only a temporary effect. The trees that grow after the rains eventually rot or burn in wildfires, and most, if not all, of the carbon is released again. Nevertheless, for as long as the growth lasts, atmospheric carbon levels fall, turning down the heat a little.

"If droughts do become worse and we don't have these regular tropical cyclones, the impact will be very negative. And regardless of climate change, our results are yet one more very good reason to protect these vast forests," said Barros.

It's not only boxing hurricanes, it seems, that can be the champions of the world.