If you're one of those people living in a cold climate who thinks a bit of global warming doesn't sound too bad, you might want to think again. A study of the likely effects on Atlantic Ocean currents has resolved previous contradictory research in a way that is very bad news for the future of the UK, Ireland, Iceland, and Greenland. While the rest of the world warms, these countries, already not renowned for balmy temperatures, could find themselves much colder than they already are.

London is at the same latitude as southern Labrador and Sakhalin. The major reason it has a different (and to most people, preferable) climate is the powerful current pushing waters from the tropical Atlantic to warm northern Europe. Popularly known as the Gulf Stream, this warm flow is part of what scientists call the Atlantic Meridional Overturning Circulation (AMOC).

It wasn't always like this. Climatic records show that many times in the past, most notably 12,000 years ago, the AMOC weakened or stopped entirely, causing temperatures in the north Atlantic and northern Europe to plunge.

For 20 years, climate scientists have been debating the risk of such an event happening again. The research even inspired a blockbuster disaster film, however most climate models suggested the weakening would be mild. Now, a paper in Science Advances argues that these models are missing a key component. Once this is included, the authors conclude, Britain's long-term future looks far bleaker. 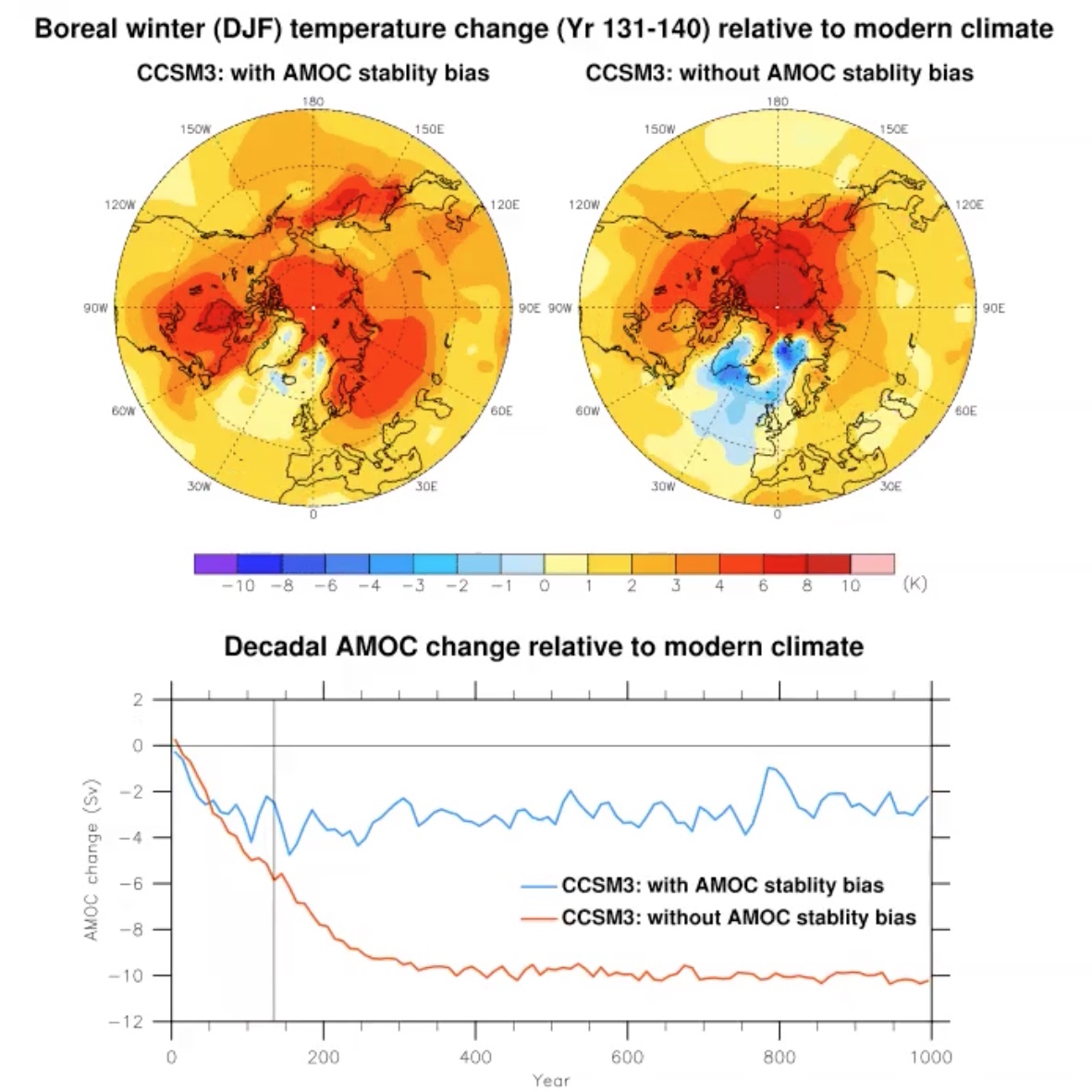 Allowing for the effects of freshwater flowing from the Arctic to the Atlantic suggests North America will warm less than expected, but that Britain and Iceland will actually cool while the world as a whole warms. Liu et al/Scientific American

The problem, according to a team led by Dr Wei Liu of the University of California, San Diego, is that previous models ignored freshwater flowing between the Atlantic and Arctic Oceans. Both oceans are naturally salty, but the melting of the polar ice caps introduces cold freshwater and some of this can travel from the Arctic to the Atlantic. Once this is included, the AMOC can run amok, changing dramatically in response to circumstances.

Liu's work explains how the AMOC turned off so often in the past, something previous models struggled with. The impact of this freshwater flow won't be immediate. For the first 50 years after a sudden doubling of carbon dioxide, AMOC strength is similar with and without allowing for the flow, Liu reports, but after that the differences become noticeable.

If Liu's model is right, then global warming will lead to the AMOC weakening relatively steadily for almost 300 years, before stabilizing at a much lower level. Even while the world as a whole warms, Iceland is likely to be a barely habitable 10°C (18°F) colder. Britain could cool approximately 3°C (5°F) in winter. Even the low countries and northern parts of France and Germany may find things rather unpleasant.

Even if there is no flaw in Liu's modeling, this is not inevitable. Radical cuts in greenhouse emissions could minimize the effect. However, if the world refuses to take action, Churchill may have been very premature in diagnosing Britain's “darkest hour”.