Many birds today are famous for their beautiful plumage, whose iridescence is often used to attract a mate. A new study in the journal Palaeontology has revealed that the very same seductive sparkle existed in at least one type of bird living hundreds of millions of years ago.

Excavated in northeastern China, a juvenile critter – no more than 8 centimeters (3.1 inches) in length – was found with its feathers immaculately preserved. They were long and streamlined, and spread out from its back and tail, leading researchers to think that it may have displayed them in the way a peacock does.

In addition, intricate structures, those used by modern birds to warp the passage of light to produce reflective and colorful patterns, were also spotted within the feathers. This combination of evidence suggests that this bird used these feathers not only to aid flight, but – like plenty of birds today – they were also used to show off to an eligible singleton.

This particular 120-million-year-old airborne dinosaur was part of the extinct enantiornithines group. Almost all of them had clawed fingers on their wings and many still had teeth within their “beaks”, but externally they resembled modern birds.

“Many enantiornithine birds possessed ornate feathers,” lead author Dr Jennifer Peteya, a palaeontologist at the University of Akron, told BBC News. “This new specimen shows that some enantiornithines also had iridescent feathers and, unlike most modern birds, these flashy ornaments developed before the animal was fully grown.”

As this study underscores, birds were, and are, one of the most diverse and rapidly evolving groups of organisms on the planet. Among other things, feathers provide perfect examples of this quick pace of diversification.

Not originally designed for flight, many experts assign their appearance to that of sexual selection, something that this new study appears to agree with. It’s also thought that feathers were a way for dinosaurs (flying or grounded) to regulate their internal body temperatures. 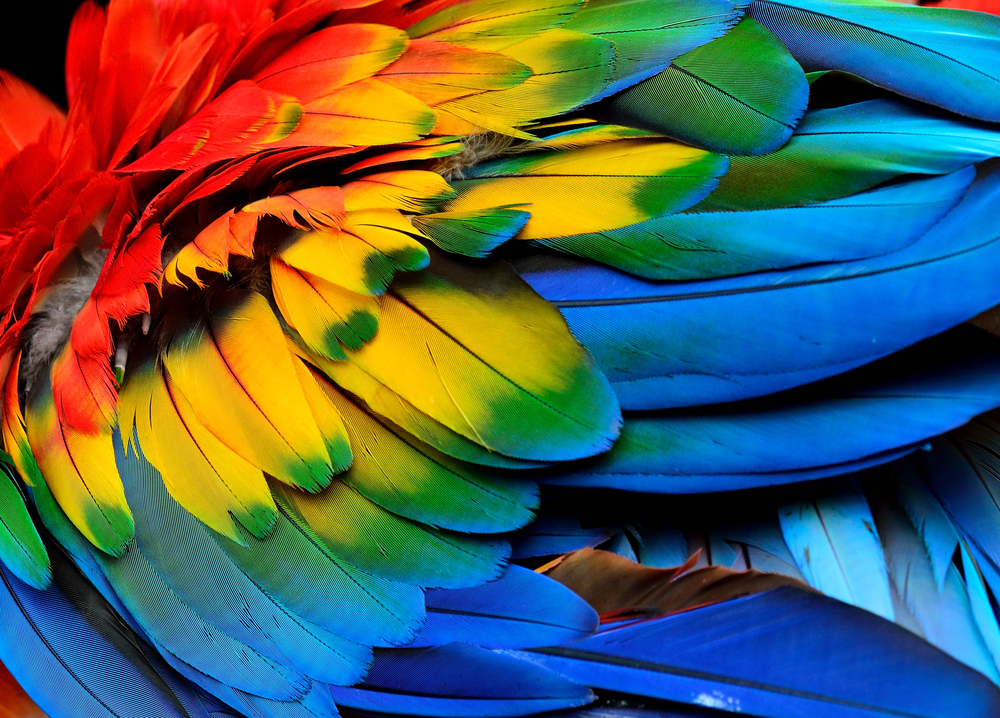 Plenty of birds use colorful feathers to attract mates, including Scarlet macaws, whose typical plumage is pictured here. Super Prin/Shutterstock

The first bird-like dinosaurs appeared during the Late Jurassic, around 150 million years ago. Feathers, hollow bone structures, killing claws, and perhaps even the ability to fly – charactertistics of many modern birds – appeared in Cretaceous dinosaurs shortly afterwards.

These groups include Deinonychus, quick-footed predators, and the ostrich-like oviraptorosaurs like the recently-discovered Tongtianlong. Along with the enantiornitheans, these groups died out during the mass extinction event at the end-Cretaceous around 66 million years ago – along with the likes of the terrestrial dinosaurs and the pterosaurs.

Of course, other groups leading to modern birds made it through, as did their iridescent plumage. So whether the genes influencing sparkly feathers were passed down directly, or whether they evolved independently many times, it seems that certain fashion trends are essentially timeless.