Having close friends nearby helps chimpanzees manage their stress levels, even in highly dangerous situations like a fight to the death with members of a rival community. So say researchers from the Max Planck Institute, who measured stress hormone levels in the urine of chimpanzees that had recently engaged in a range of different social activities.

In primates, stress levels are largely coordinated by the interaction between the hypothalamus, the pituitary gland and the adrenal glands – otherwise known as the HPA axis. As well as regulating levels of a stress hormone called cortisol, the HPA axis helps to control digestion, immune response, fertility, cognition and several other key processes.

Maintaining a well-balanced HPA axis therefore has major implications for overall health, and it has long been assumed that social interactions play a significant role in achieving this.

In search of a concrete link between friendship and the HPA axis, scientists closely monitored wild chimps in Uganda during episodes of intergroup conflict, grooming, and rest. They also noted whether or not the animals’ close bond partners were present during these episodes, and then collected urine samples in order to measure levels of urinary glucocorticoids (uGC). 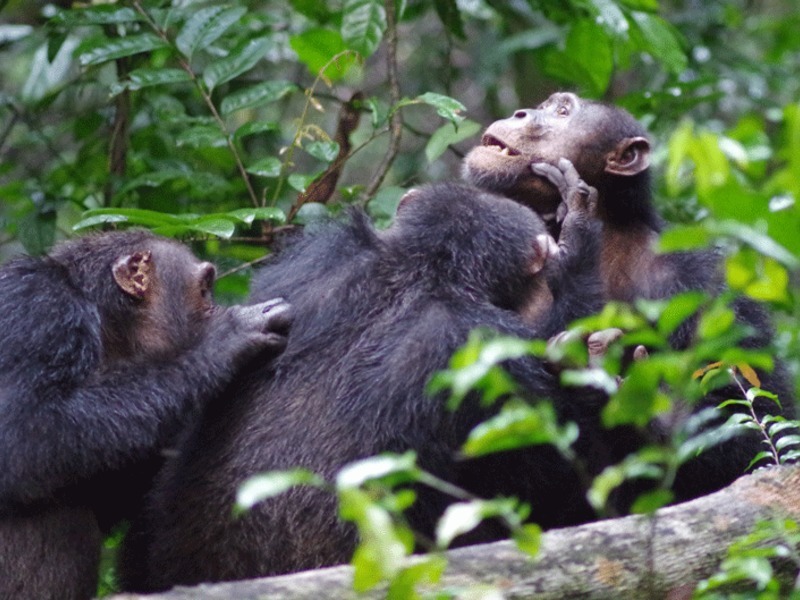 “We found that within each event, the animals’ urinary glucocorticoid levels were lower when engaging with bond partners rather than other individuals, whether during stressful intergroup encounters, everyday affiliative grooming, or resting”, explains study co-author Catherine Crockford in a statement.

Surprisingly, the team found that when chimps engaged in fights with outsiders, levels of this stress hormone skyrocket only if they were unaccompanied by their close allies, but were not elevated at all when they were backed up by their bond partners. They suggest that the support provided by these friends helps to eliminate stress, even during potentially fatal conflicts.

In light of this evidence, the study authors propose that friendship is hugely important to the management of the HPA axis in chimps, and is therefore likely to be vital to the animals’ overall health. Given the close evolutionary relationship between humans and chimpanzees, they also say it’s highly likely that the same is true for people.