Researchers have uncovered the remains of a giant otter in China that when alive would have been comparable to the size of a wolf. The fossils belong to a new species of ancient otter, known as Siamogale melilutra, that lived in freshwater lakes around 6 million years ago.

Evidence of the giant otters had been discovered before, but only in the form of a few scattered teeth found in Thailand. This latest find of a complete cranium, mandible, teeth, and other skeletal bits and bobs vastly expands what was previously known about the animals, and gives further indications to the massive size of the species.

Currently, the largest living otter species – the giant otters of the Amazon River – reach up to around 1.8 meters (6 feet) and weigh in at roughly 32 kilograms (70 pounds), but this ancient otter from China would have come in at almost twice its size. The researchers estimate that S. melilutra would have weighed around 50 kilograms (110 pounds), with a skull dwarfing that of its modern cousin. This makes the ancient animal one of the largest known species of otter ever to have existed. 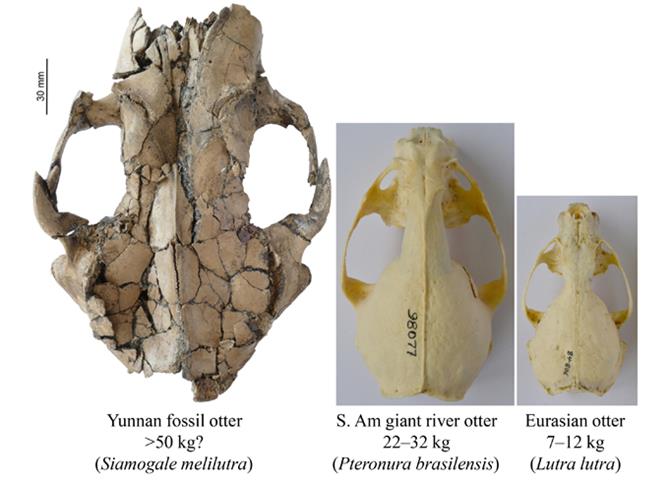 The skull of S. melilutra is almost twice the size of the largest living speices of otter, P. brasilensis. X. Wang et al. 2016

The creature has been named S. melilutra – a compound of “meles”, which refers to badgers, and “lutra”, which denotes otters – due to its mixture of otter- and badger-like skull and teeth. The cheek teeth are of interest because they are what is known as bunodont, which means they have rounded cusps. This suggests that the giant otters had cranial and dental adaptations to feed primarily on large shellfish and molluscs, fossils of which are also abundant in the same layer of rock that the skull was found.

“Multiple otter lineages have low-crowned bunodont teeth, leading us to ask the question if this was inherited from a common ancestor or if this was convergent evolution based on common dietary behaviors across different species,” explains Dr Xiaoming Wang, who co-authored the paper published in the Journal of Systematic Palaeontology, in a statement. "Our phylogenetic analysis suggests that bunodont dentition independently appeared at least three times over the evolutionary history of otters.”

The researchers were also able to reconstruct the environment in which the otters lived, describing it as a “swampy, shallow lake with quite dense vegetation," presumably not unlike the forests in which modern giant otters live today. /