Once upon a time in North Korea – long before it was a bizarre, secretive, militarized state – there was a game-changing volcanic eruption. The paroxysm of Mount Paektu was one of the largest in human history, unleashing 100 cubic kilometers (24 cubic miles) of volcanic debris across the region and releasing as much energy as 100 million “Little Boy” atomic bombs.

Curiously, though, the date of this eruption has been difficult to pin down, despite the fact that there’s plenty of geological evidence that it clearly happened. Now, thanks to a fossilized tree ring, we know that this particular catastrophic explosion took place within the winter of the year 946.

The event, which covered much of the region in thick, impenetrable ash, has often been referred to as the Millennium Eruption, as that’s when researchers have estimated it took place. However, despite plenty of international research being conducted on the volcano on the Korean/Chinese border, a precise date has long eluded experts.

When Mount Paektu blew its top, however, it also happened to knock over millions of nearby trees. Many were either carbonized or obliterated. However, as reported in the remarkable study in Quaternary Science Reviews, one particular tree happened to fall in exactly the right place so that researchers from the University of Cambridge could analyze it a thousand years in the future.

This larch tree, buried within the volcanic layer of the mountain and fossilized, was radiocarbon dated to being around from at least the year 775, definitely before the eruption took place.

Thankfully, its tree rings were found to be intact, and researchers literally just counted them to work out the date of its sudden death – the year 946. The result was confirmed using volcanic debris trapped within a Greenland ice core. 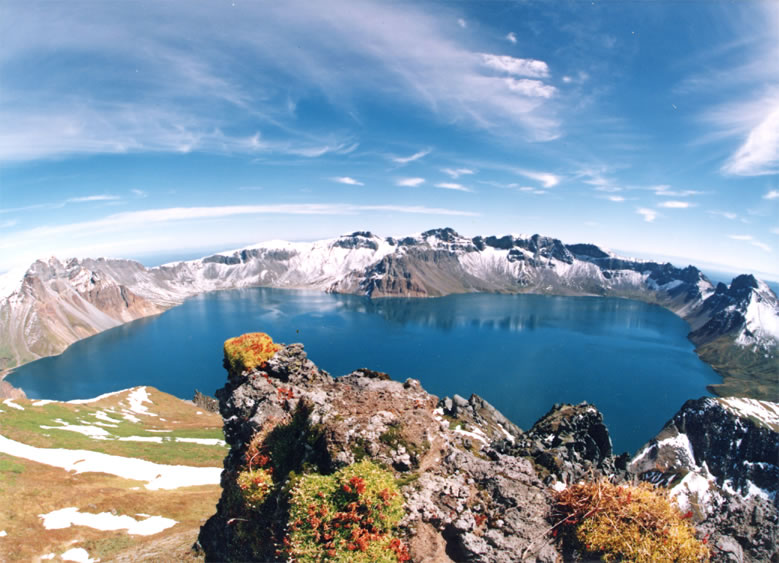 Rather wonderfully, as reported by the Guardian, the date matches up with a mystical tale kept in records within a temple in Japan, far from the source of the eruption itself.

On November 3 of the year 946, monks present at the temple noted strange “white ash falling like snow.” Another holy site nearby noted that “the sky rumbled and cried out,” scaring people so much that prisoners were freed in an attempt to appease the gods’ apparent anger.

Although a good deal has come to light about the Millennium Eruption in the last decade or so, there’s a lot still left unknown about the volcano itself. In fact, the reason North Korea is even allowing researchers from the UK and elsewhere to investigate Mount Paektu is because any future eruption would devastate much of the country.

Worryingly, a recent study suggested that the detonation of a hydrogen bomb – enough to generate a M7.0 quake – might provoke the volcano to erupt once more.