A team of scientists, lawyers, philosophers, and entrepreneurs have joined forces in the hopes of establishing the world’s first independent “space nation”.

The project plans to launch their first of many satellites as early as Autumn 2017. In theory, the nation will have no territorial land mass, but instead will consist of a network of orbiting satellites with their own laws, governance, and regulatory bodies.

Dubbed Asgardia, after the mythological city of the skies ruled by Norse god Odin, they hope to seek official status as a country from the United Nations. Whether they will (or even can) obtain this status remains to be seen.

The plans were announced on October 12 at a live-streamed press conference in Paris. Project leader Dr Igor Ashurbeyli seemed very aware the plans could be dismissed as “crazy,” but amid some cynical questioning from journalists, he outlined the concept behind the mission.

“The essence of Asgardia is peace in space, and the prevention of Earth’s conflicts being transferred into space,” Dr Ashurbeyli said at the press conference.

“Asgardia is also unique from a philosophical aspect – to serve entire humanity and each and everyone, regardless of his or her personal welfare and the prosperity of the country where they happened to be born.”

If established, they imagine Asgardia could be used as a platform for the exploration of our Solar System and even deep space. They also revealed loose plans to build a “shield against cosmic hazards”, such as meteorites and space junk. They did add, though, it would otherwise not interfere with the business of Earth-bound nations, and vice versa.

So far, the project has been funded solely through the private funds of those working on the project. However, they have plans to crowdfund and approach investors to strengthen their coffers. Initially, they will accept 100,000 people to become members of the would-be nation of Asgardia. You can even apply to become a citizen on the project’s website, which has a ".space" domain name, of course.

“As low-earth orbit becomes more accessible, what’s often called the 'democratization' of space, a pathway is opening up to new ideas and approaches from a rich diversity of participants,” Professor David Alexander, Director of the Rice Space Institute at Rice University in Texas, told the press conference.

“The mission of Asgardia to create opportunities for broader access to space, enabling non-traditional space nations to realise their scientific aspirations, is exciting.” 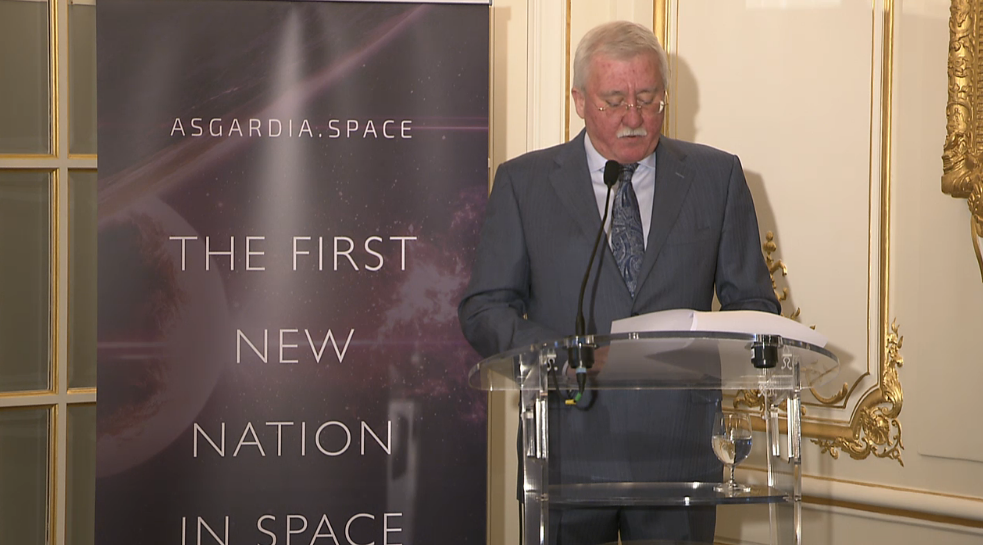 Such an ambitious plan has many hurdles to overcome and is surrounded by many "if and buts". For one, it seems overly optimistic they will be able to obtain nation status from the UN, let alone by 2017. It was also questioned that the project will require an Earthly nation state to host its satellite launches, although they did explain they would require the help of other country's space agencies in the short term.

Furthermore, the legality and politics of the project is meaningless if they don't have the money, technological capability, or practical means of actually getting to space.

“Is it madness? Call it what you will, and time will tell,” said Dr Ashurbeyli.