Ex-Australian Prime Minister Tony Abbott is currently in London cozying up with like-minded climate skeptics at the prominent thinktank Global Warming Policy Foundation, this week. A handful of media outlets, including The Guardian and ABC News, claim they were denied attendance to the event, but fortunately, Abbott’s team put the whole speech transcript on his website for the world to enjoy – and what a beauty it is.

During his speech, Abbott consistently denied human-driven climate change, but then also said climate change was a positive thing, claiming it is "probably doing good; or at least, more good than harm."

He explained that "far more people die in cold snaps than in heat waves so a gradual lift in global temperatures... might even be beneficial."

He also likened policies to address climate change to “primitive people once killing goats to appease the volcano gods," accusing them of "sacrificing our industries and our living standards to the climate gods to little more effect.” Watch out Donald, Tony is out-sound-biting you right now.

Another gem from the confusing speech was his assertion that “environmentalism has managed to combine a post-socialist instinct for big government with a post-Christian nostalgia for making sacrifices for a good cause.”

The vast bulk of the speech, however, was geared towards throwing doubt on settled climate science, comparing anyone opposing it to being subject to “the Inquisition” and the “thought-police” of George Orwell’s 1984.

“Almost as bad is the claim that ‘99 percent of scientists believe’ as if scientific truth is determined by votes rather than facts,” he said, both missing the point and wrongly using the word "believe".

His view on climate change was most clearly highlighted in his concluding note: “Looking at the climate record over millions of years, one day it will probably come; whatever we do today won’t stop it, and when it comes, it will have little to do with the carbon dioxide emissions of mankind.” 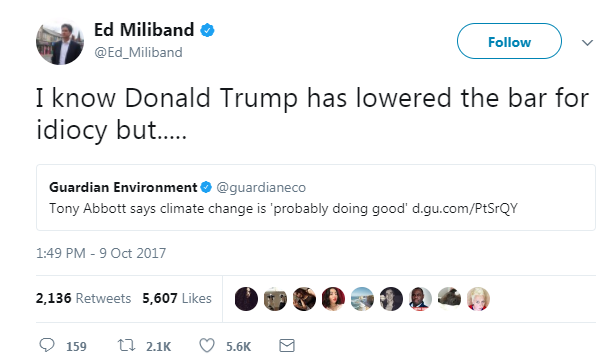 Abbott's comments have gone down a storm in the UK where the speech was given. Ed Miliband, former UK Labour Party leader and now rather hilarious political commentator, tweeted about it, saying: “I know Donald Trump has lowered the bar for idiocy but.....”

According to Tanya Plibersek, deputy Australian Labour leader, the comments “left the realm of the merely destructive and entered the realm of the loopy." She told Sky News: " This is just weird stuff from the former prime minister.”

The former leader from down under is certainly no stranger to pronouncing his views on climate change. Back in 2009, while he was in office as PM, he famously declared that climate change was “absolute crap.” However, in 2014, he said he takes climate change “very seriously” and he regards himself “as a conservationist,” a view that seems less pronounced now that he's not prime minister.

Feathers May Have Been Key To Dinosaurs' Rise To Dominance
animals