If you live anywhere along the San Andreas Fault, then you live knowing that a fuse beneath your feet has long been lit, and a colossal seismic bomb is imminently due to detonate. With each day that passes, the risk of a powerful rupture – the “big one” – increases, and a recent assessment by a real-estate analytics firm has given its grim prediction of the cost of the devastation.

Speaking to the Wall Street Journal, CoreLogic Inc. said that if an 805-kilometer (500-mile) stretch of the fault ruptured in an 8.3M event, 3.5 million homes would be seriously damaged, at a cost of $289 billion, which is roughly 1.7 percent of the total value of the US economy.

If the northern section alone were to rupture, 1.6 million houses would be damaged, costing $161 billion. A southern rupture would threaten 2.3 million homes and cost $137 billion.

This is frightening enough, but it’s worth emphasizing that their analysis assumed there’s a distinct probability that pretty much the entire fault line is primed to rupture. For decades, scientists were unsure whether this was possible, but a 2014 study appears to validate these claims.

The analysis, led by the United States Geological Survey (USGS), notes that the entire San Andreas Fault is twice as likely to rupture and cause a 6.7M quake in the next 30 years than others nearby. In fact, they concluded that there is a 95-99 percent chance that this will come to pass.

In terms of earthquakes registering as a 7.5M, the chances are lower, but still horrifically high.

With respect to Los Angeles, there is a one-in-three chance of one taking place in the next 30 years. San Francisco’s chances are lower at one-in-five, but the Greater California region has a one-in-two chance. These values appear to be based on individual sections of the fault rupturing.

However, the more powerful the quake along one section, the more likely the rest of the fault will rupture along with it. Make no mistake, the big one is coming – in one form or another. 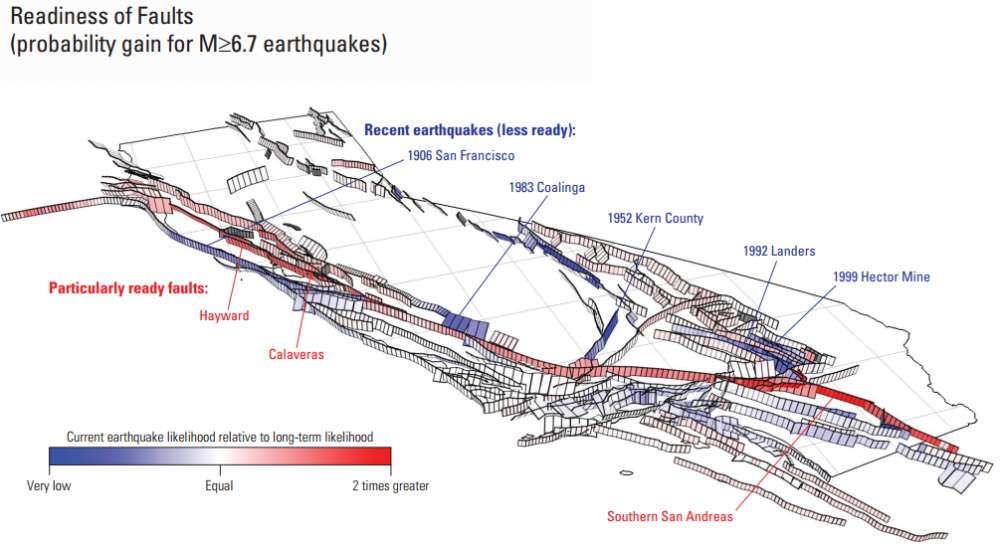 The readiness of faults to rupture. Note that almost the entire San Andreas Fault is twice as likely as others to rupture in the next 30 years, causing at least a 6.7M quake. USGS

Right now, most analyses focus on the segregation of the fault network into northern and southern sections. The last time the southern section ruptured was back in 1857, when a 360-kilometer-long (224-mile-long) section jutted forwards at a shallow depth. This registered as a 7.9M event, and it lasted for three minutes.

Not all of it ruptured, however. One section near the Salton Sea hasn’t experienced a massive event since the late 17th century, although it has recently been exhibiting some unexpected seismic activity.

The northern section last had a major rupture back in 1906, where a far less populated San Francisco took the brunt of the tremors, and 3,000 people lost their lives.

According to the USGS study, the Pacific Plate is trending northwards besides the North American Plate at a rate of around 5.1 centimeters (2 inches) per year. This migration is uneven, however, and evidence clearly shows that plate movement has not significantly occurred along at least a third of the boundary for around 150 years, perhaps longer.

When this stress is eventually released, it could trigger not just one section, but the entire fault to fracture. If the entire fault line – all 1,300 kilometers (800 miles) of it – were to rupture to the tune of an 8.0-9.0M event, it would devastate large swaths of San Francisco and Los Angeles and tens of other huge cities and towns. Such an event would kill thousands and displace millions.

Sadly, this is not just a hypothetical situation. This cataclysm is real, and it is on its way. 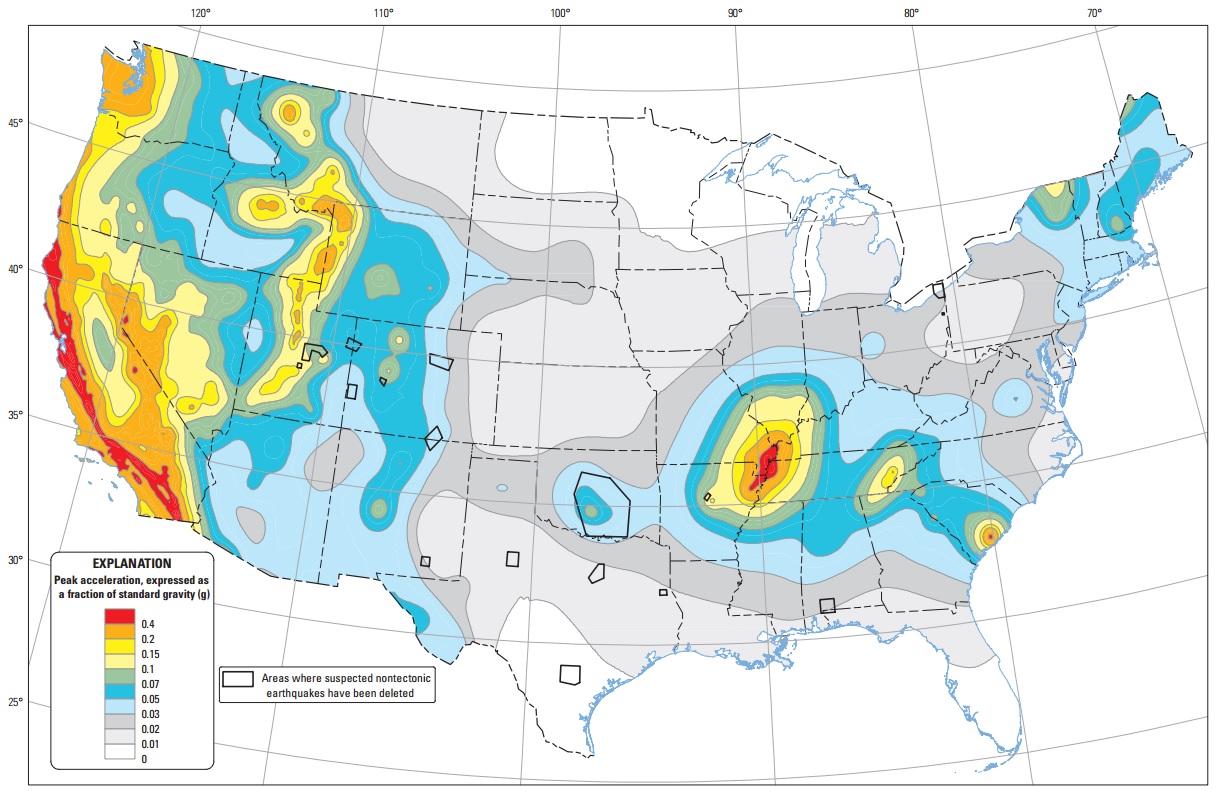 A probabilistic hazard map of the contiguous US. The redder the region, the more likely it is in the next 10 years to accelerate as a fraction of gravity due to seismic activity. The higher the fraction, the worse the damage. USGS