There is a disturbing situation developing among wild hamsters in northeastern France. Their numbers are plummeting, and researchers think they may have finally figured out why: Deranged female hamsters are feasting on their own young.

“Females stored their pups with their hoards of maize before eating them,” the researchers reported in their grisly study published in Proceedings of the Royal Society B. “[The] pups were still alive at that time.”

The dramatic and gruesome shift in their behavior is thought to be a result of the changes in agriculture. Experiments found that the deranged habits manifested when the rodents were fed diets high in maize, which is grown in vast monocultures across much of northeastern France.

The hamsters (Cricetus cricetus) are native to Europe and the Near East, but have been faring particularly badly in the West, especially France. Various explanations have been suggested for this, mainly revolving around the shifts in agriculture that have replaced the grasslands with expansive fields. Pesticides have also been suggested as leading to their decline, or mechanized plowing destroying their burrows. But it might be more to do with what farmers are growing, rather than how they’re doing it. 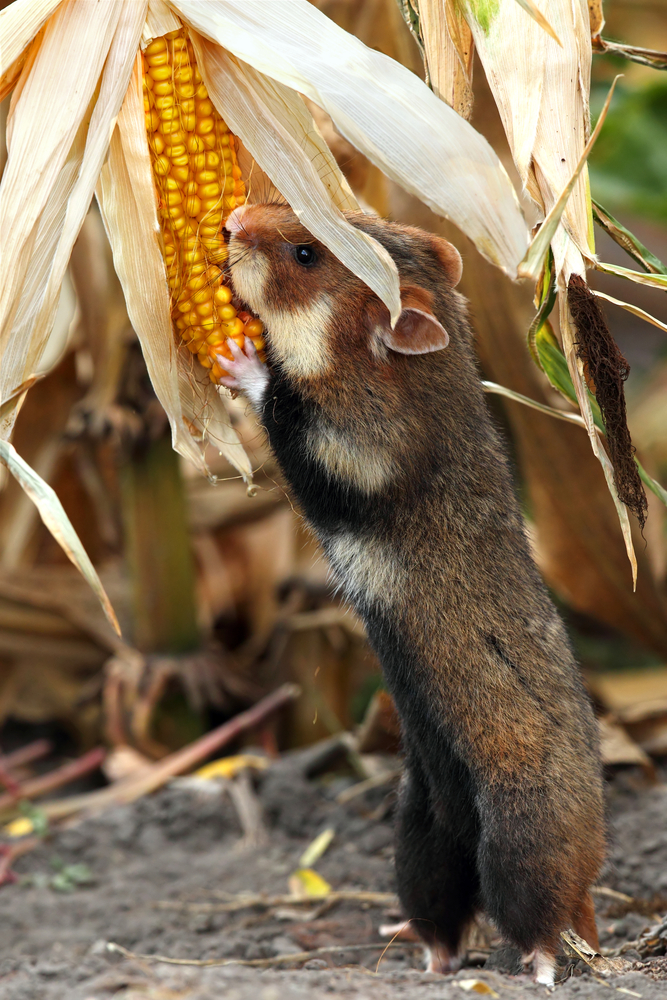 Tests in the labs found that hamsters fed on a varied diet of mixed grains of wheat and clover or worms, and those fed on corn-based diets gave birth to exactly the same number of pups. But there was a stark difference to the number of these pups that survived. On the varied diet, around four-fifths of babies were weaned, whereas, for those pups whose mothers were fed corn diets, only 5 percent survived.

The females were eating their babies. But the mothers were also found to be displaying other abnormalities. They developed dark, swollen tongues, and their blood became some thick it was difficult to draw for samples. It turns out that by eating a diet so high in maize, the hamsters were developing a vitamin B3 deficiency.

Known as pellagra in humans, it has been observed in communities before, particularly in areas where people rely heavily on maize, or in regions with humanitarian disasters where food sources are limited. And even in humans, it can lead to striking changes in behavior. “Improperly cooked maize-based diets have been associated with higher rates of homicide, suicide, and cannibalism in humans,” wrote the researchers.

By replacing a naturally varied environment with just a single species of crop, farmers have been unintentionally causing the rodents to develop this self-destructive condition. The researchers hope that the study gives more weight to the argument against monocultures, and towards having farms grow mixed crops to provide a variety of habitats and food sources to prevent such grim situations from occurring.

Image in text: Eating too much maize causes the hamsters to develop a B3 deficiency, leading to their murderous tendencies. Jausa/Shutterstock