Climate change is the problem that makes everything else worse. It means murder and violence will happen more frequently, resources will begin to disappear, the economy will suffer, and the military will find defending the nation particularly difficult. It will also negatively influence your health, as pointed out by 400,000 of America’s clinical practitioners.

Far from just writing an open letter, this band of medical professionals from an extremely wide range of backgrounds formed a supergroup.

The newly-minted Medical Society Consortium on Climate & Health constitutes 11 of America’s most respected and influential medical groups, and they’ve compiled a report explaining that climate change won’t just threaten our wellbeing in the future – it’s making us sick right now.

The report underscores the fact that hundreds and thousands of studies have made direct links between anthropogenic climate change and human health.

Specifically, it notes that the spread of mosquito-borne diseases, the incidences of contaminated water, the number of deaths due to extreme weather events, allergy seasons, air quality problems, and diseases made worse by extreme weather are getting worse by the year with no sign of stopping.

Warmer summers mean that mosquitos are bringing disease further north than ever before. Stagnating air means that pollution lingers for longer.

People suffering from respiratory or cardiovascular diseases are dying more frequently as spring arrives increasingly earlier every year, and as summers become prolonged, which stresses their immune systems.

Hurricanes are becoming stronger due to warming waters, and climatic phenomena like El Niño are appearing more frequently and more powerfully than ever before, bringing potent droughts, floods and other mercurial weather patterns with them. Heat stress is causing workers, particularly manual laborers, to fall ill.

The report even notes that people’s mental health is being strained by climate change, with people unable to cope with the rising mercury and the threatening weather systems cropping up across the United States. 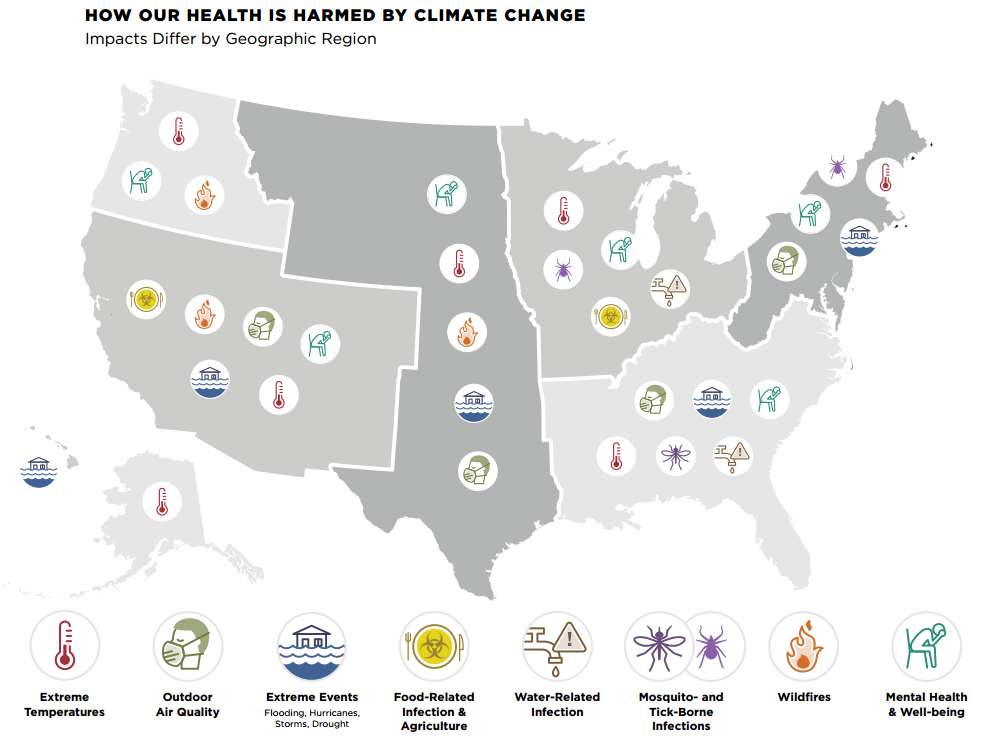 How America is getting sick, divided by regions. The Medical Society Consortium on Climate and Health

“The health of any American can be harmed by climate change, but some of us face greater risk than others,” the consortium write in their report. “Children, student athletes, pregnant women, the elderly, people with chronic illnesses and allergies, and the poor are more likely to be harmed.

“Addressing climate change is the greatest public health opportunity of the 21st century, and failure to adequately address it could undo most of the progress in global health over the past century.”

Unfortunately, the federal government just turned its back on climate change action. It’s full of people that deny the basic science of climate change, people who are happy to defund healthcare across the entire nation, and headed by a President who wants to make historic cuts to scientific research.

So – best of luck, America.