The crafty chimps are at it again. Their expansive use of tools means not only have they been found to crack nuts with rocks and fish for algae, they have now been spotted using drinking sticks. While this may conjure up images of apes using straws, the chimpanzees in the Comoé National Park, in the Ivory Coast, actually chew the end of the sticks to make them more absorbent, before dipping them into hollows in trees to get at the collected water.

They were seen to chew the end of the stick in order to again turn it into an effective absorbent sponge, before dipping it into deep cavities in trees where water had collected. The behavior was displayed by both males and females, young and old, suggesting that the actions of three communities of chimpanzees studied in the Comoé National Park was in fact a cultural behavior, passed on from one generation to the next.

The apes are already known to show a similar action to get a sweet hit of honey from stingless bee nests across Central Africa, but the researchers looking into this water dipping technique found some important differences that set it aside from honey dipping.

“The use of brush-tipped sticks to dip for water is completely new and had never been described before,” the lead researchers of the study, Juan Lapuente, told BBC News. “These chimps use especially long brush tips that they make specifically for water – much longer than those used for honey.”

This enables the chimps to reach right down to the bottom of tree hollows to get at the water that is collected there, a source which no other animal in the forests is able to exploit, and the longer tip means that they can collect much more of the water. 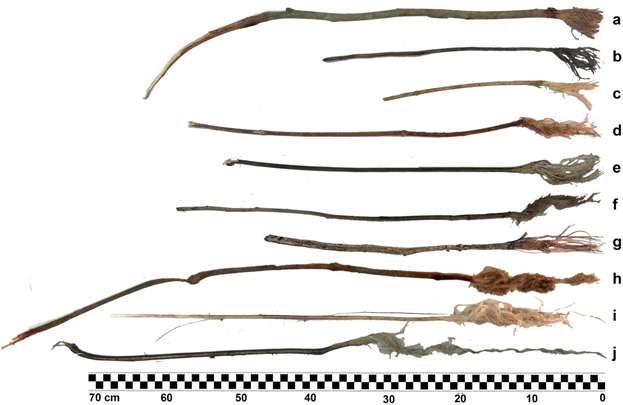 A range of the tools the chimps used to access water in the trees, showing the chewed ends that act like sponges. Lapuente et al. 2016

While the chimps were found to understandably practice the behavior only during the late dry season, where water in the savanna where they live is most scarce, curiously other water sources, such a rivers, are still available. Why then they choose to dip for water remains a little unclear.

But what is clear is that this discovery makes the conservation of the chimps living in Comoré National Park even more vital. Not only is it the second largest population of the apes in the Ivory Coast, but it is also the only place on the continent where they craft these dipping sticks.