Ladies and gentlemen, we have a new Tyrannosaurus rex. This remarkably intact colossus was pulled out of the ancient earth of the Hell Creek Formation in North America, a veritable treasure trove of fossils that dates back to the Late Cretaceous – 100.5 to 66 million years ago – the twilight chapter of the age of the non-avian dinosaurs.

The fossil remains include a nearly entirely complete skull 1.2 meters (4 feet) across, several vertebrae, ribs, hips, pelvis, and lower jaw bones. Based on these bones, this carnivorous (and perhaps cannibalistic) monster would have been 12.2 meters (40 feet) long and up to 6.1 meters (20 feet) tall. Its skull alone weighs around 1,135 kilograms (2,500 pounds), about the same as an adult male black rhino.

Judging by its cranium, the team of paleontologists responsible for excavating it and transporting it to Burke Museum at the University of Washington (UW) think that it was around 15 years old when it died. Most T. rex live until 25 to 30 years old, so this towering predator clearly met an untimely end. Living 66.3 million years ago, it would have been one of the last non-avian dinosaurs in existence before the asteroid-based apocalypse arrived 300,000 years later.

The team notes that this is the 15th fairly complete T. rex skull known to science, and another welcome addition to the growing collection of Tyrannosaur fossils. It was found as part of the Hell Creek Project (HCP), a multidisciplinary paleontology initiative designed to look at the time immediately before and after the end-Cretaceous mass extinction event that wiped out the dinosaurs – and almost all mammals, too.

“This is really great news. The [HCP] is responsible for finding the most T. rex specimens in the world, with 11 to date,” Nathan Myhrvold, Intellectual Ventures CEO, paleontologist, and one of two founding members of the project, said in a statement. “The T. rex has always been my favorite dinosaur and I'm really pleased that this one is going to make its home at the Burke Museum.” 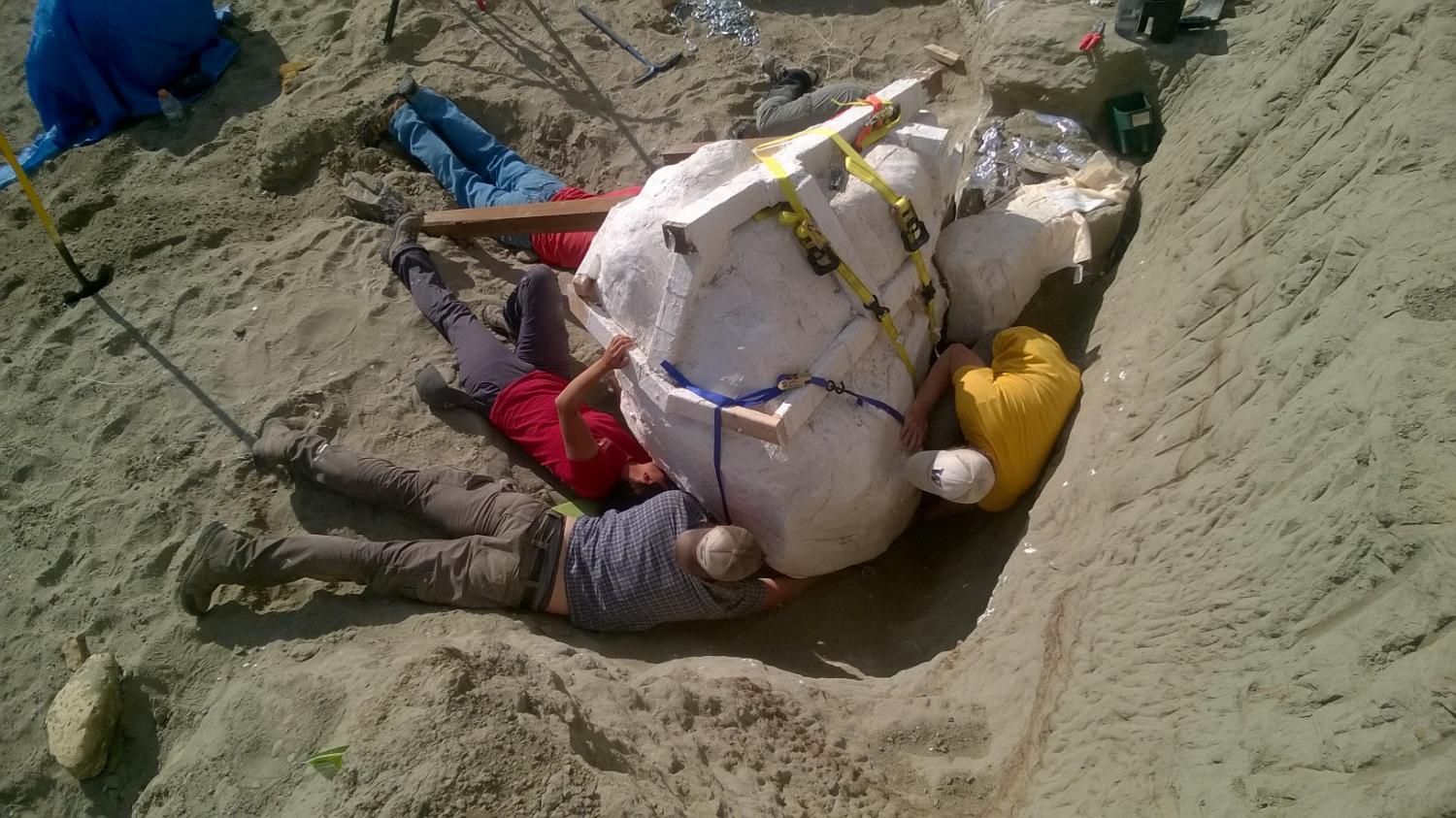 The skull took some effort to remove from the geological formation. Dave DeMar/Burke Museum/University of Washington

Although this particular species is inarguably the most iconic and instantly recognizable dinosaur, fossils of it are actually quite rare compared to many other types of dinosaur. However, it’s still more commonly found than some other predators, including the fairly mysterious Abelisaurus, a South American bipedal hunter that would have rivaled the T. rex in both size, speed, and ferocity.

In any case, each and every fossil find produces at least one new scientific revelation about the world’s most famous dinosaur. Jack Horner, the second co-founder for HCP and a world-renowned paleontologist who was the original scientific advisor for Jurassic Park, noted in the statement that this new find is “definitely one of the most significant specimens yet found,” adding that “because of its size, it is sure to yield important information about the growth and possible eating habits of these magnificent animals.”

This particular T. rex would have co-existed with another terrifying predator – the Dakotaraptor. Just recently, this newly discovered type of feathered agile assassin was also found in the Hell Creek Formation, and would have pounced on its prey at incredible speeds with its 19 centimeter-long (7.5-inch) killing claw. At 5 meters (16.4 feet) in length, it wouldn’t have been a match for any adult T. rex patrolling the area, but it could have competed for prey with any juveniles.

As fearsome as these dinosaurs were, they did suffer from one particular problem that makes them a little less scary. Their immense height, combined with their silly, small arms, meant that if they ever fell over, they’d never be able to catch themselves and would likely break their own head from the faceplant. 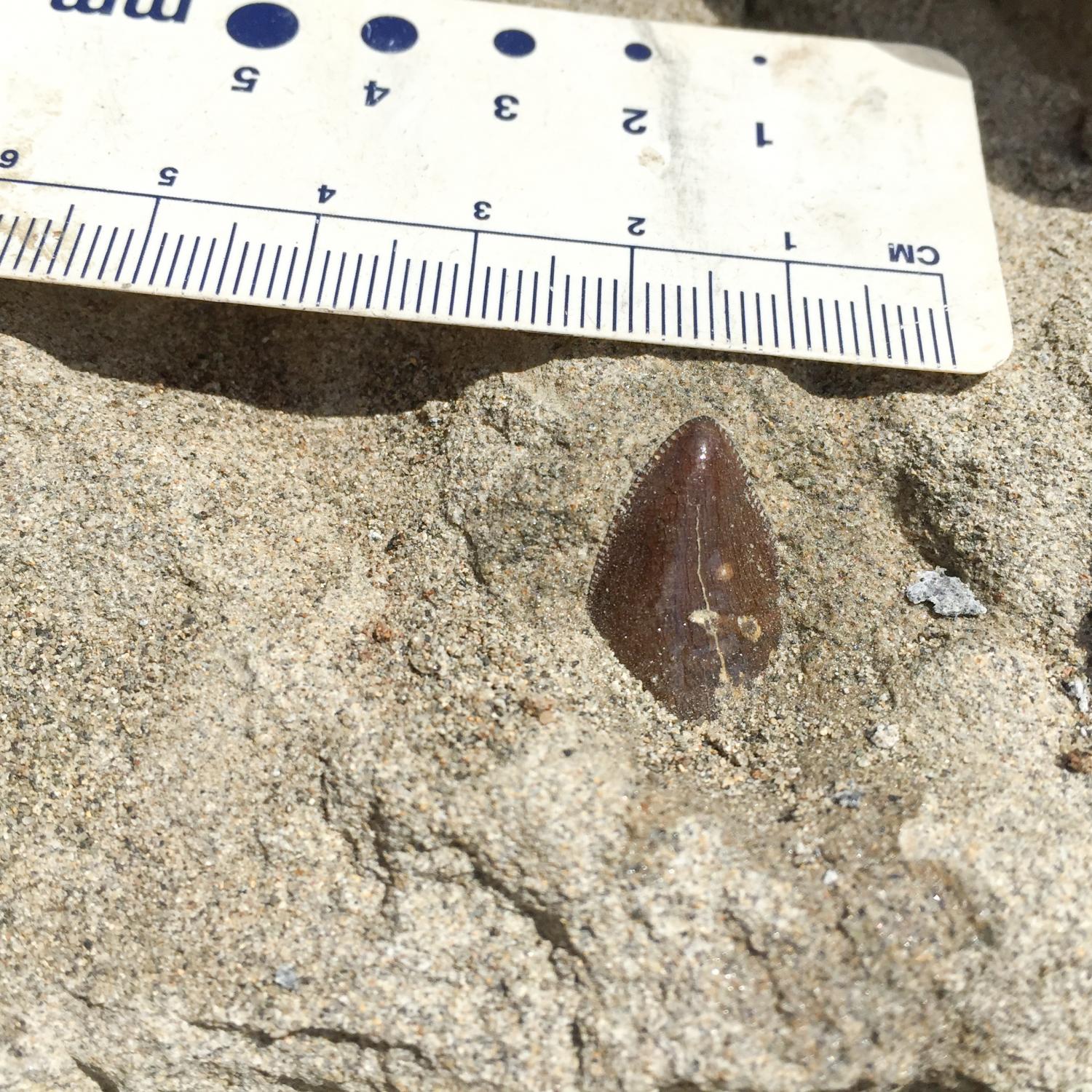 One of its serrated teeth. Tom Wolken/Burke Museum/University of Washington