Boxer crabs get their name from their habit of holding anemones like boxing gloves in their claws, one of the strangest symbiotic relationships in nature. Since at least 11 species of tropical crabs use the anemones for defense and to collect food, it clearly works for them. Research on one boxer species has found the crabs induce asexual reproduction in their anemone gloves, something never seen before in a non-human animal.

The symbiotic relationship between crabs of the genus Lybia and anemones has not been well explored. The crabs are small and well camouflaged, but Yisrael Schnytzer, a graduate student at Bar-Ilan University, Israel, set out to correct this, collecting more than 100 Lybia leptochelis crabs from the Red Sea off Eilat, all of which were found holding anemones.

In Peer J, Schnytzer reports that when researchers removed an anemone from one claw the crabs responded by ripping the one they still held into two equal parts, which were then held, one in each claw. Genetic analysis of the anemones showed all were clones, indicating they had reproduced asexually and that this splitting is standard behavior in the wild, rather than the crabs picking up two unrelated anemones.

The anemones are so valuable to the crabs that if one is deprived of its gloves it will usually fight another crab to steal part or all of one of its anemones. 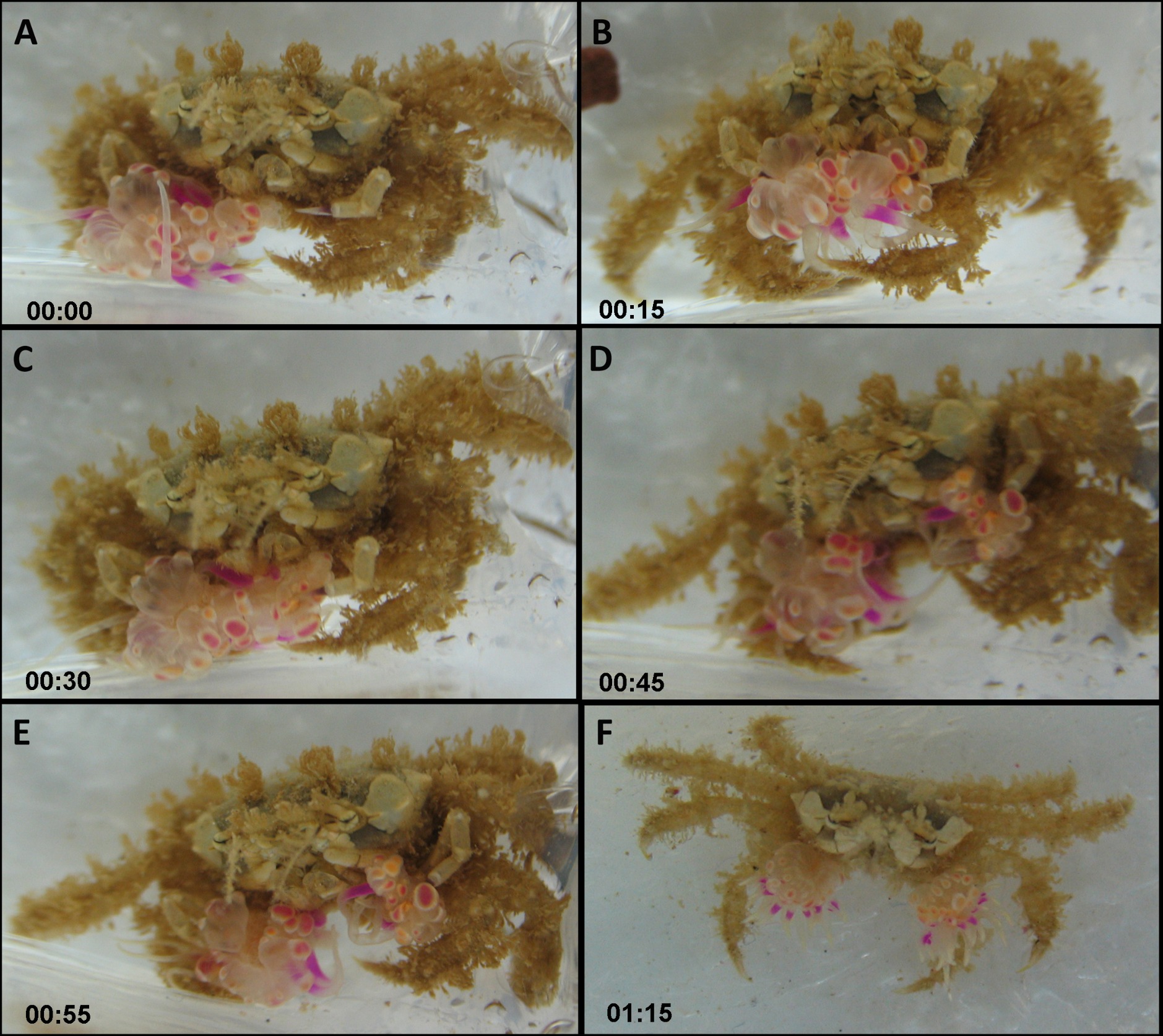 The process by which boxer crabs split anemones so they reproduce asexually can take more than two hours. Schnytzer et al/ Peer J

Other species of boxer crabs mostly use Triactis producta as their glove of choice, but Schnytzer found that L. leptochelis uses a species of Alicia anemones that has yet to be scientifically described or named.

It doesn't sound like a great life for the anemone, what with being thrust in the face of predators so its stinging nettles can ward them off, having food stolen by the crabs and getting ripped to pieces in fights. Moreover, all this asexual reproduction has kept the anemones' genetic diversity very low. Schnytzer found that most of the anemones carried by the Red Sea crabs were genetically identical, and the rest showed only small differences.

However, in a previous paper Schnytzer confirmed that the anemones gain a benefit through being moved around, giving them access to more food and oxygen than they would be able to acquire on their own. Triactis producta is common in tropical seas but Schnytzer and co-authors were unable to find any examples of this Alicia species living independently, raising the possibility they cannot survive without the crabs. On the downside, the crabs effectively bonsai them, preventing the anemones from ever getting too large to comfortably carry.

The relationship is a reversal of the usual one between crabs and anemones, where the crustaceans make their home among the stinging tentacles, Nemo-like, of a much larger protector.