Roman authorities have come up with an, err, interesting solution to the problem of overgrown grass in the city’s parks – they plan to introduce sheep.

Years of budget shortages have taken their toll on Rome’s parks and gardens. Some spaces are so neglected that grass reaches chest height and benches are buried in vegetation.

So Mayor Virginia Raggi, of controversial populist party the Five Star Movement, has come up with an innovative “solution” to fix the problem: shuttle in natural grazers (i.e. sheep and goats) from the surrounding countryside to munch on the city’s overgrown lawns. The proposal was revealed in a Facebook video posted by city environmental official Pinuccia Montanari.

Perhaps unsurprisingly, the suggestion has been on the receiving end of some serious mocking by the party’s opponents.

“Goodbye to gardeners and lawnmowers!” said Enzo Foschi, a Democratic party councilor for the Lazio region, reports The Guardian. “They’ve already replaced rubbish collectors with seagulls and now this. What will Raggi do during the summer season to get rid of mosquitoes – provide geckoes?”

And Massimo Proetti Rocchi, Friends of Leopardi Park president, wanted to know what would be done about the sheep’s feces.

The announcement has also raised some eyebrows on Twitter, with one user comparing the Roman parks to the Amazon rainforest. 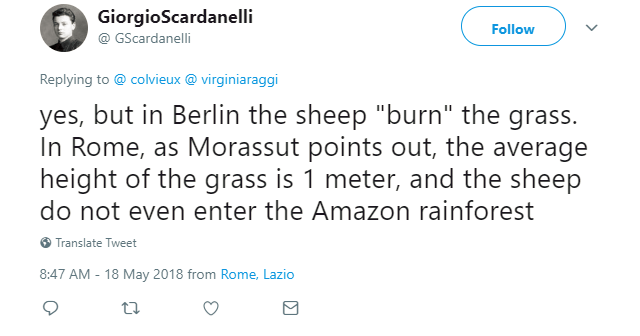 Some suggested employing other animals for more government services – elephant firefighters, anyone? 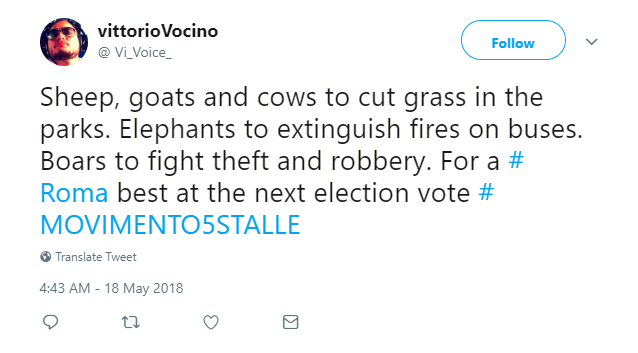 And others have pointed out the grass might be too long for sheep. The Mayor may want to consider shipping in giraffes and camels instead. 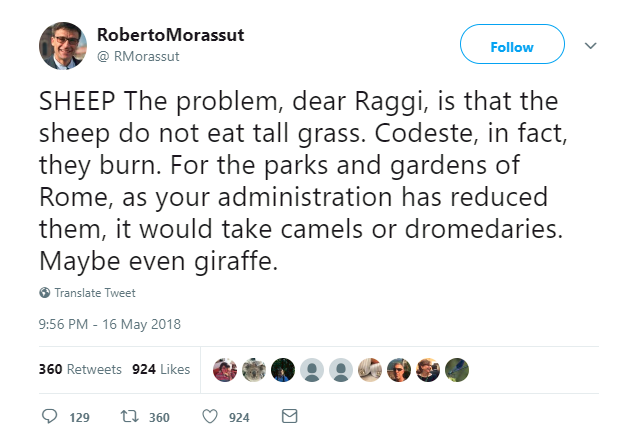 But the idea of using grass-chomping animals to tame city parks isn’t quite as out-there as it might seem at first. Raggi’s suggestion was inspired by parks in Berlin and the Italian city of Turin, which introduced 700 sheep to graze on the city’s two parks back in 2008.

Parisian authorities also enacted a similar policy, introducing a herd of shaggy black sheep to replace its lawnmowers in 2013 in a bid to make France’s capital a greener city. They called the policy “eco-grazing”.

In fact, using grazing animals to maintain and fertilize common spaces is a practice that goes back thousands of years, though this is Rome and not a village green. We don't even want to think about the smell.